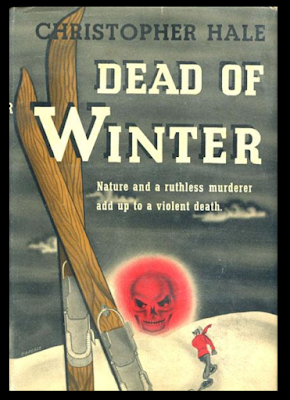 One day last week I was literally snowbound and decided to dig into my various winter themed murder mysteries which led me to Dead of Winter (1941) by Christopher Hale. Initially, I had set aside a small pile of Hale mysteries for a post on the series character Lt. Bill French for my ongoing "Neglected Detectives" blog feature. However, this introduction to Hale (yes, it’s the first book I’ve ever read by “him’) and French was such a winner that I had to highlight the book in a solo post.

THE STORY:  A ski party turns deadly when a monstrous blizzard —98” according to a radio emergency weather report!—leaves a group of Michigan friends stranded in the home of Mrs. Enid Beauregard while a killer targets the guests.

THE CHARACTERS:  Brett Collins is our narrator who introduces us to the various guests who include her fiancé Hadley, itching to get a loan of $10,000 from anyone who will listen to him; Homer Bence, a 62 year-old plumbing salesman and former business partner of Enid’s ex-husband; jovial boyish Norman Prescott and his oddly aloof girlfriend Judy; Rhoda Norwood, a flighty blond known for her award-winning golfing skill and almost equal skiing talent; and Capt. Toby Woodward, Hadley’s rich uncle who spends much of his time chasing women. Brett is his latest would-be conquest. In fact, he daringly proposes marriage to her practically in front of Hadley. Rhoda is not happy about that, however, for she is in love with Toby. This sets up a houseful of volatile emotions, passionate tempers and money grubbing relatives. Toby has murder victim written all over him from the moment he appears and it’s not long before he fears for his life.

He claims that his bedside glass of water had been poisoned. He demands someone give him a container so he can pour in a sample of the tainted water and head out into the storm to the police station so that it can be tested. He’s already sampled the water and it tastes oddly bitter. Homer also tastes the water and says it has definitely been spiked with something. With that second opinion out in the open Toby storms up to his room promising to suit up for the blizzard and trek the four miles to town on his snowshoes. After an entire days passes and Toby does not return everyone is afraid something horrible has happened.

Hadley goes snooping in Toby’s bedroom when his uncle does not return. He find his wallet now empty of its original $500. Beneath the bed Hadley finds the container with the poisoned water as well as a tray holding his uncle’s dental bridge. How could Capt. Woodward have left the house without any of those things? To leave behind the poison sample is the most alarming as that was his reason for leaving the house in the first place. Hadley confides in Brett and suspects that someone has killed Toby. But where is the body? 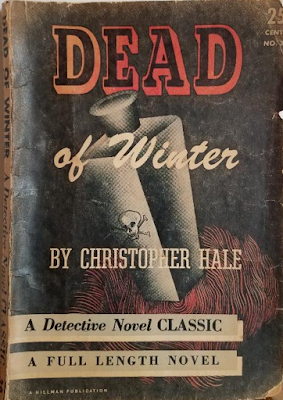 When the police finally show up landing in a seaplane on the semi-frozen lake nearby and do a thorough search of the area Captain Woodward’s body is found frozen solid in a ravine. Was it an accident? Did he lose his way in the storm? Lose his balance perhaps and fall? Or was he sent toppling to his death? Evidence proves he was killed his face his smashed in as if he fell or was shoved in to the ground and yet the body was found face up in the snow. Lt. Bill French implies that Woodward’s body was moved from the original spot where he died. French has several theories and is leaning towards murder, but he tells everyone they will have to wait for autopsy results to learn if Toby was drugged or poisoned.

INNOVATIONS:  The story is filled with all sorts of nifty bits – a curious cat turns up dead in someone’s bedroom; someone is nearly killed by a tree felled for firewood; someone monkeying around with poison bottles and chloroform; and a second murder is pulled off in a locked and almost sealed room. Only the window is open and yet there are no footprints beneath the snow-covered ground below. How did the murderer get out of the room? Forgery, stolen objects, and bigamy also feature in the plot. Everyone, of course, has a well-guarded secret, most of all the murderer.

INFLUENCES: The more I sampled of Dead of Winter the more I got strong flavor accents of Mignon Eberhart. Hale manages to create a creepy atmosphere and a well maintained sense of paranoia and claustrophobia both aspects that permeate most of Eberhart’s murder mysteries. Like Dead of Winter Eberhart’s mysteries also tend to feature small groups of suspects in isolated environments. Having a woman protagonist who filters all the characters personalities through her viewpoint also had a heavy Eberhart vibe. Additionally, the narrative mirrors Eberhart’s favorite ploy of making the female narrator’s love interest the primary suspect, a fictional convention Eberhart pioneered and so often imitated throughout the 1930s and early 1940s by mostly women writers who saw Eberhart as the idol of the American mystery novel that it became a formulaic trope for decades after and continues to this day. Hale does a brilliant job of shifting blame and suspicion among her characters but laying it thick on Hadley. For a while it seems that no one else could possibly be the killer. Then we have two other possibilities with stronger motives and opportunity. Finally, in a last minute twist Hale pulls out her wild card and slaps it on the table. I was truly surprised in the ingeniously done finale.

THE AUTHOR:  There is not much about Christopher Hale on the internet, primarily because it is a pseudonym. Once I started hunting under the writer’s real name I hit some gold. In the December 14, 1947 issue of Detroit Free Press I found the obituary of Frances Ross Stevens (1895 – 1947), the true identity behind the pen name of “Christopher Hale.” Over on the left is the photo that accompanied the obituary -- perhaps the only photo of Stevens in the whole of the internet. Note that the date of her death has been inaccurately reported all over the internet, she died one year earlier than 1948.

Stevens appeared to be married based on her name, but nothing was mentioned about her husband who she either divorced or who predeceased her. Stevens grew up in Michigan, the setting for most of her mystery novels, and had two brothers and one sister, Margaret, who was also a writer. She died at the home of her brother William Ross in the well-to-do Detroit suburb of Royal Oak, Michigan where apparently her other siblings also lived. According to Ellen Nehr's research in Crime Club Compendium Stevens worked as an advertising copywriter in Cincinnati and Detroit prior to moving to Grand Rapids, Michigan and becoming a full time novelist. With the exception of her first book, Smoke Screen (1935), all her mystery novels were published by the esteemed “Crime Club” imprint of Doubleday Doran. Her mysteries were regularly reviewed in Kirkus Reviews, The Saturday Review and the New York Times with consistently favorable write-ups that called attention to her clever plotting, engaging characters and often humorous dialogue.