IN BRIEF: I Did Not Kill Osborne - Victor Bridges 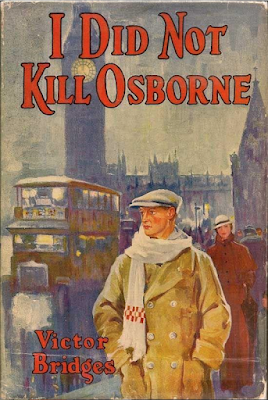 This is the year I’ve been reading books by several writers who I’ve known about for a long time and have been dancing around the periphery of my interest level. One of these writers is Victor Bridges (1878-1972) who was born George de Freyne in Bristol. Bridges worked in a bank and as an actor prior to becoming a full time writer.  Eventually he settled in Essex where most of his books are set. After getting several stories published in magazines Bridges turned to novels and averaged one published book a year from 1912 to 1961. Recently, many of his books started appearing for sale online by the dozens. He suddenly became of great interest to me especially when I learned that his career had lasted almost five decades. Surely there must be something to his work for his career to have lasted so long.

I should know better. Being prolific does not necessarily equate with quality or innovation. Bridges mostly reminds me of his equally prolific, bestselling contemporary J. S. Fletcher. Both writers churned out standard thrillers jam packed with action (albeit predictable action).  Here we have popular fiction that appealed to an audience of undiscerning readers who liked all their entertainment to be ripping yarns, easily identifiable and familiar.

Bridges' most enticing title for me seemed to be I Did Not Kill Osborne (1934) so I started with that one.  Ironically, this is an invented title slapped on the book by American publishers. In the UK the book was published as Three Blind Mice (1933), unimaginative and off putting for its nursery rhyme allusion, but aptly symbolic of the three lead characters who get caught up in a dastardly plot oblivious to the danger until it's too late. Despite the difference in titles the premise was intriguing – Nichols Trench, professional sculptor, is on trial for the murder of Jack Osborne, an acquaintance who stole a steel manufacturing formula that would revolutionize construction and engineering. In the opening chapter Nicholas is waiting to hear the jury’s verdict while his defense attorney assures him that he will be acquitted. Of course he is and Nicholas then turns his attention to trying to find out who killed the industrial thief.

Nicholas is aided by #2 mouse Molly O'Brien. She has attended every day of the trial and her presence was not unnoticed by Nicholas’ wandering eye. Molly is the daughter of the formula's inventor and gives us the requisite background on how Osborne became associated with her father back in New Orleans and how he managed to get the formula and return to England. The third of the “three blind mice” is Nicholas’ best friend Sir Jerrold Mordaunt (or plain ol' Jerry to his pals), wealthy heir to a baronetcy, whose money allows the three to finance their impending adventures.  Jerry has a devoted butler at his beck and call and a faithful dog, George, that accompanies the group. Nicholas and Molly set up their sleuthing base at Jerry’s vast estate and together the three hatch a plot to recover the formula and capture Osborne’s real killer. A group of professional criminals are hot on Nicholas’ trail and they kidnap Molly which sets in motion a series of high paced pulp magazine style incidents which don’t let up until the final pages. Any hope of the book being a true detective novel just fizzles out. 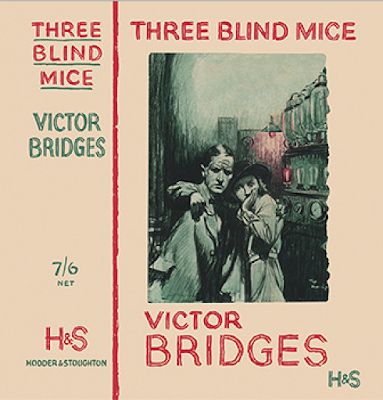 It's all fast paced, easy to read, hardly taxing on the brain, yet all too familiar. Many of Bridges’ first books were adapted for the silent screen and he himself had written several plays prior to this novel. No doubt influenced by silent movies and penny dreadful melodrama I Did Not Kill Osborne is so much like hundreds of other books you’ll be overcome with déjà vu long before you reach the halfway mark. “Haven’t I read this before?” you may ask yourself several times. Nicholas saves the girl, punches out several villains, earns several bruises and injuries before the last page. Molly is stoic and brave during her abduction ordeal. Jerry is dashing and charming and witty, like all best friends, ever ready with cash or his trusty butler to help at the last minute. Oh and there's Jimmy, the 12 year-old boy who idolizes Nicholas as an artistic mentor (the boy shows him drawings and wants Nicholas to help teach him how to be a great artist). Jimmy is recruited to help navigate a small boat that takes our intrepid group to Essex where the climax of the book takes place complete with terrifying death trap and an explosion that nearly does in everyone. The villains are dirty, lumbering, stupid and easily defeated except when Bridges needs to delay the finale.  The leader of the crooks turns out to be a Bolshevik spy, a classic cliche of the egocentric villain who talks too much and never sees what's behind him until it bashes him in the face.  Yes, he too is conveniently stupid when Bridges needs him to be.  It all works out well (did you think otherwise?) with a happy ending for our heroes and deserved arrest for the villains.

Oh! Almost forgot. We do find out who really killed Osborne. But there was no detective work involved at all. By the end of the book with Nicholas having nearly died three times and Molly's being abducted, beaten and nearly blown up herself does even matter who killed Osborne?  The revelation is done in a confession by the killer's widow. Huge anticlimax.

In a word, passable. Very attractive dust jacket on the US edition up there at the top of this post. That's probably the only reason to seek out a copy.