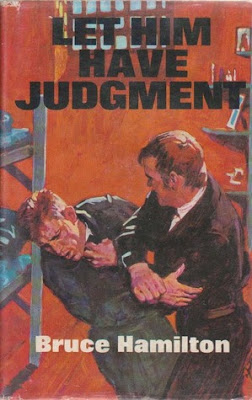 THE STORY: Robert Teal has been very busy in London. He's been digging around courtroom archives, reading newspapers, spending the day listening to how a certain judge talks to a jury.  Then he up and leaves and heads off to the village of Moxton where he becomes interested in a local ne'er-do-well named John Willoughby. Suddenly Teal disappears and so does Willoughby.  A body turns up and it looks like a very nasty murder.  But who is it?  And who exactly is Teal?  Or Willoughby for that matter?

THE CHARACTERS: I'd rather skip this section because so much depends upon masquerade, impersonation, and double identities. The appeal of this story is that it's another one of those in which the less you know the more you will enjoy it. Let's just jump ahead to what makes this book such a unique example of crime fiction--

INNOVATIONS:  The book has a brilliant construction that could only be accepted by someone who admires crime fiction plotting. There is a Prologue which is sort of a mini tale in itself, but lays the groundwork for Hamilton's purpose in writing the book. Let Him Have Judgment (1948) is clearly meant to serve as an indictment against the vagaries of the law and how criminal justice is often left in the hands of those who seek retribution. The reader learns of the fate of Harry Gosling who apparently was wrongly sentenced for a murder he never committed. On the eve of his execution he pleads with the reverend who is sent to his cell to give him solace. The two conspire to break basic rules about  written communication posted from the prison. Harry writes a letter and has the minister vow that he will take the letter, not read it, and conceal it another letter written by the reverend himself. Then the reverend is to send both letters to an address in America. The prologue fades out as Harry is led to the gallows. 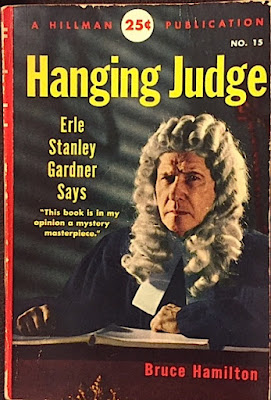 The story then veers off in a completely new direction with the entrance of Teal focussing on his mysterious visits to the courts and other detective work, his vanishing, and the discovery of the corpse. All of this leads to the arrest of a judge and a murder trial. The bulk of the tale shows us various aspects of a murder investigation and how it is exploited by the press, by members of the inquest jury, by the lawyers presenting their cases, and even by members of the trial jury. It's all an ingenious concept showing how the legal system is vulnerable to master manipulators and subtle powers of suggestion.  The US title of this book is Hanging Judge and we learn that Judge Brittain is far from an admirable man of law who has allowed his cruel pleasures and indulgent lifestyle to corrupt him and the way he views the law. As the murder trial progresses it becomes clear that the Judge has some secrets he wants to kept hidden and yet he manages to admit to them while remaining ostensibly untouchable and unsullied.  But Hamilton allows us to follow the thoughts of one jury member whose perceptions of the case are thoroughly prejudiced. His offhand comments made to other jury members when court is out of session will change the way all of the judge's testimony is heard and viewed.

The real ingenuity of the story comes in the triple twist of the Epilogue when all the mysteries of identity, wrongful accusations, and seemingly unjust verdicts are all explained.  On my paperback copy there is a laudatory blurb from Erle Stanley Gardner who says, "This book is in my opinion a mystery masterpiece." Very true. I'd go so far to call this novel a tour de force of a legal mystery as well as a caustic depiction of the fragility of a legal system all too susceptible to manipulation. 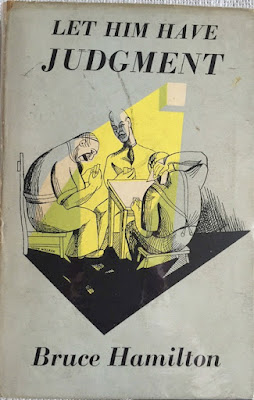 THE AUTHOR:  Arthur Douglas Bruce Hamilton was the older brother of novelist and playwright Patrick Hamilton best known for Angel Street, Rope and Hangover Square all of which became crime classics in their movie adaptations. Bruce Hamilton's crime novels take after his brother's in that both are more about the psychology of the criminal mind rather than following the formulae of traditional detective fiction. Both writers tend to indulge in the bleaker aspects of humanity with books that have noirish endings. Bruce's novels, so little known and celebrated, may not match his brother's flair for writing but can often surpass --as in this case-- the younger Hamilton's more conventional approach to exploring crime.

EASY TO FIND? The book is out there in both US and UK editions, but it is the US edition that oddly is in relative abundance with twenty copies for sale. The UK edition was reprinted at least three times that I can verify and yet I find only four copies for sale online. As always you ought to check libraries when copies for sale are this scarce.
Posted by J F Norris at 12:00 AM