FFB: The Affair of the Gallows Tree - Stephen Chalmers 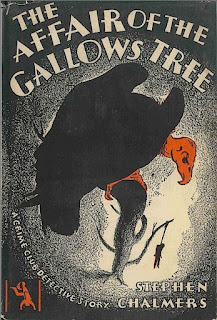 THE STORY: Forest Ranger Scott Boldrewood has his hands full. Construction workers are feuding with the California State Engineer overseeing a road being built through the Santa Pia National Forest. Then there are the acts of sabotage from the nature loving "tenderfoot" rebels and the distractions provided by a composer seeking inspiration in the sounds of nature. By the time a body is found hanging from a tree then just as quickly disappears from that tree Boldrewood really has his work cut out for him.

THE CHARACTERS: The cast is 99% male with one token woman. That's because The Affair of the Gallows Tree (1930) deals with road construction, engineering and forestry service. Not at all career paths chosen by women back in the day, gang. Our token female character exists for love interest, of course, and to provide the requisite screams and terror. She's the one who finds the body hanging in the tree and is almost immediately dismissed as a "nervous case" with a wild imagination when the body disappears. Her name is Nova Thorne and the only non-cliche part of her role is her profession. She's the modern music composer. Nova has come to the forest to do research on the pitch and tonal quality of babbling brooks, the sound of the wind, and all of the unusual animal and bird noises she can train her ears on and then convert them into musical tributes to Mother Nature. She gets help in matching the sounds to each particular animal and bird from a Native American guide named Rance and sometimes from deputy ranger.
Boldrewood (could he have a more fitting name?) is typical of the hero detectives from a pulp writer like Stephen Chalmers: stalwart, brave, good looking, and loaded with common sense. He's also good at old school detective work that has its roots in hunting and tracking. He's keen on reading animal and human trails, reading the wear on tree bark and other seemingly uncanny talents related to the natural world. His deputy ranger Tommy Kershal is equally good at this kind of detective work when he points out how he knows a forest fire is the work of arsonists and can tell the difference between worn and broken rope and cleanly cut rope. Likewise, the Native American Rance does his part with almost supernatural skill as when he notices disturbances on the pine needle covered forest floor and can follow the trail to a nearby stream.

The rest of the cast is a surly, temperamental lot as might be expected of men who do hard labor and are in constant battle with the weather and other natural forces. There's James "Black" Emmett, the head engineer with more trouble than he can deal with; the foul-mouthed, violent Irishman Lonergan, foreman of the construction crew; a rebellious local homesteader named Jape Lord who is suspected of leading a ring of saboteurs who want to put an end to the road being built through their land; and the overly intellectual and officious Vaughn, an engineer who speaks for the state of California and won't listen to reason. Vaughn gets into several verbal and physical fights, lands a black eye from Lonergan's fist and is purportedly the body found hanging in the tree. But until the body can be found no one really knows who it is. Since Vaughn seemed to vanish Boldrewood and the rest of the men are convinced it's him. He certainly made himself well hated among everyone involved in the construction project.

INNOVATIONS: In this section usually I point out inventive uses of crime fiction plotting and storytelling techniques. But this time I'm going to point out a hilarious method of conveying swear words. As mentioned above Lonergan has a foul mouth, but rather than resorting to filling the page with his four letter word strewn speeches Chalmers does something very unusual. Here's an example:


"Is the [condemned] comp'ny so damned mean it makes a howl over a [quite sanguinary] rope? I'll buy another [doubly condemned] rope! Take it outa my [tainted] money!"

Other bracketed synonyms used in place of well known epithets are [unsanctified], [ancestral mistake], [moral delinquent], and [pertaining to heredity]. I couldn't stop laughing at these. That is when I finally figured out what the swear word really was. 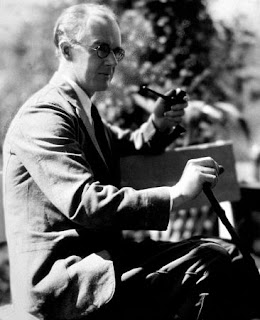 THE AUTHOR: Stephen Chalmers (1880-1935) was born in Dunnon, Scotland and raised in the United States. According to an obituary I found in a 1935 issue of The Chicago Tribune he began writing for American newspapers in 1902. Five years later he began contributing stories to pulp and slick magazines. Primarily a western writer he also wrote prolifically in other genres including romance, adventure, detective fiction and even some science fiction penning over 100 stories in his long career. By 1930 he had turned to writing novels. In addition to The Affair of the Gallows Tree he wrote four other detective novels all of them published by the esteemed "Crime Club" imprint of Doubleday Doran between 1930 and 1934.  He was writing and publishing his work all the way up until the day he died. Two of his stories have been confirmed as the source for the silent movies Partners of Fate (1921), a romance adventure and Looking for Trouble (1926), a western with mystery elements.

THINGS I LEARNED: Timber wolves roamed the hills in great numbers in northern California in 1930. The rangers need to keep an eye out for them. At one point in the story one character imitates the call of a wolf to signal to another person and this frightens the rangers into action. Rance has to calm everyone down by pointing out that the sound is not a real wolf.

pulling a lime bottle is an illegal method of catching fish. Fill a bottle with quicklime and seal that bottle with a cork that has a hole bored though it. Then as Jape Lord explains to the rangers: "Yuh drop it in a hole yuh know is lousy wit' big trout an' jes' wait till the lime gets wet enough to explode the [bottle]. Then yuh rakes in the trout ez come floatin' belly-up." I wonder if this is done anymore? A rod and reel are much easier, more relaxing and a lot less messy.

hegira - an exodus or migration. This comes from the name given to "Muhammad's departure from Mecca to Medina, prompted by the opposition of the merchants of Mecca and marking the consolidation of the first Muslim community." All that from the Merriam-Webster Dictionary.

EASY TO FIND? There are both UK and US hardcover editions but no paperback reprints of The Affair of the Gallows Tree. In the US there are two reprint editions -- a hardcover from Grosset & Dunlap and also a slightly abridged version in Star Novels magazine. Copies of the hardcover both Crime club and G&D reprint are out there and tend to be between $3 and $15. You'll pay more for a copy with the scarce and very creepy DJ (BTW, that vulture and four others play a major role in helping Boldrewood find the missing body). No digital version exists that I could find.


* * *
This is one of three books I read for the "Crime of the Century" monthly reading challenge which invites bloggers to read and write about crime fiction published in a specific year. The year for September is 1930.