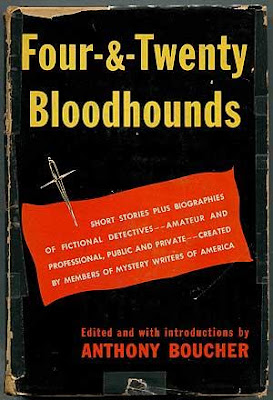 For years the Mystery Writers of America have been putting out an annual anthology usually with a theme of some sort. I'm not sure if this tradition is still being continued, but it certainly was a regular practice for the first ten or fifteen years of their existence. Four & Twenty Bloodhounds (1950) is one of the earliest collections, the third to be precise. From the clever title you might be able to figure out the theme. The book contains twenty-four stories each spotlighting a different series detective. They range from the very familiar (Ellery Queen, Gideon Fell, Hildegarde Withers) to those known only to diehard fans (Johnny Liddell, Merlini, Scott Jordan, Lt. Timothy Trant) to the utterly obscure (Nick Noble, Shadrack Arnold, Mortimer Death). Each story is preceded by some background history on the writer, the detective or both, sometimes some intriguing publication history as well all provided by the genre's first real fan boy, Anthony Boucher who oversaw the collection as editor and mystery maven.

This is one of the most varied and exciting mystery story anthologies I've ever come across. There are traditional detective stories, hardboiled pulp style thrillers, some suspense tales, and even two solve-it-yourself puzzles penned by Clayton Rawson and featuring the Great Merlini. The bulk of the stories were originally published in magazines between 1942-1947 with a few stories taken from short story collections like the Solar Pons tale which was first published in book format. Some date back to the late 1930s and were pulled from pulp magazines like Lawrence Blochman's story, "The Zarapore Beat" about a NYC patrolman assigned as a bodyguard to a visiting Maharajah, pulled from a 1936 issue of Argosy. Only three pieces appear to be originally written for this volume: "Three Strips of Flesh", the only Mary Finney short story, actually just a rewrite of the novel Devil in the Bush (1945); "Girl Overboard" by Q. Patrick is the first appearance of a story that was rewritten to take place in a hotel rather than a ocean liner because (Boucher tells us in his intro) it apparently resembled a true crime case that was fresh in the headlines when Wheeler and Webb sent it off to a magazine publisher, here we get the original shipboard mystery; and "Michael Shayne as I Know Him", the only non-fiction piece in the book, by Brett Halliday who gives us the inside dope on how Shayne came into being.

That last piece by Halliday is merely an elaboration on something that each author was asked to provide for the book. Following each story is a biographical sketch modeled after that registry of the elite, Who's Who. Each author was asked to provide their character's biographical details from birthplace to schooling, professional life to hobbies. Boucher then took that data and wrote up listings as they would appear in a mythical book called The Detective Who's Who. I took a photo of Hildegarde Withers' entry as an illustration (see below) because it's one of the more amusing ones. Look under her hobbies. Dianetics! Who knew the old schoolmarm was a follower of L. Ron Hubbard's cult? 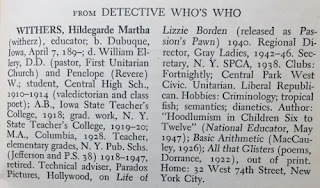 I'm still reading this 400+ page anthology, one or two stories per day, so I can't really give you an overview of the best of the 24 stories. I liked the Solve-It-Yourself puzzles neither of which I figured out. Way too subtle for me, I guess. Four & Twenty Bloodhounds includes several other first appearances, too. Of those I'll highlight the only short story appearance in book format of Rachel Murdock whose debut was in the novel The Cat Saw Murder, the only appearance in a short story of The Mysterious Traveller ("The Big Money" by Robert A. Arthur) who was created for a radio series; and a rare short story --a prizewinner in EQMM no less-- featuring Jeff and Haila Troy ("Two over Par" by Kelley Roos, set at a golf country club), one of the married couple sleuthing teams whose adventures are worth reading. Lots of detectives who I had never heard of turn up in these pages. Among them are Ken Crossen's Mortimer Death, aptly enough a mortician turned amateur sleuth, and Shadrock Arnold, created by pulp fiction writer Verne Chute, one of the three correspondence school detectives in the genre and probably the least known of that trio. 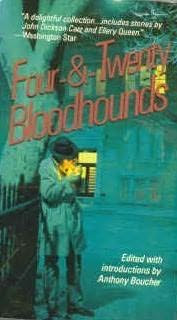 EASY TO FIND? I was surprised to discover that this book was reprinted back in 1985 by Carroll & Graf bringing the total of available editions to at least three. Online booksellers offer multiple copies of all three: US & UK hardcover, and the C&G paperback reprint. It's a book that diehard fans of detective fiction definitely ought to read if not own. The breadth of the stories, the unusual characters, and the rarity of some of the lesser known detectives in short story appearances make this anthology a must have for real devotees of the genre.
Posted by J F Norris at 10:14 AM