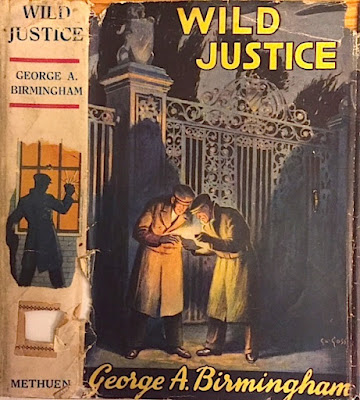 THE STORY: The apparent suicide of an Irishman with ties to the IRA is investigated by Chief Constable Devenish, Lord Benton, and a country parson. The detective novel plot is used to explore ongoing conflict between Irish loyalists living in England and the hatred they endure from British citizens.

THE CHARACTERS: Wild Justice (1930) is narrated by an Anglican minister who is given no name throughout the course of the book. Early on in the book he says "I am no lover of the Irish, who have always struck me as a troublesome race, but I like to be just to them." This is the overarching tenor of the book. The author, an Irishman himself, starts by poking fun at the anti-Irish sentiment that was prevalent in England at the time. The humor is mildly satiric in pointing out the narrow-minded prejudices of the narrator and others, but by the end of the book the author is clearly espousing his critical opinion of the radical Irish, the revolutionaries and terrorists who have sullied the reputation and history of the homeland he is proud of.

Chief Constable Devenish, a retired army colonel and the primary detective of the piece, is the embodiment of all that is good about Ireland. He's a war hero, affable, fair-minded, and has an admirable skill in making people feel at ease the moment he meets them. The victim and the man put on trial for murder, who happened to be the victim's dearest friend as well as an IRA member, are depicted as everything that is wrong with the country. In fact, the KC prosecuting the case uses the courtroom as his chance to malign all of Ireland as a land of rebels that celebrates "secret societies" and the men who run them. Despite what may seem to be slathering on condemnation for Ireland and its people, Birmingham does not really resort to simplistic black and white portraits of good and evil. Rather he shows the fraternal love Irishmen have for one another and presents legitimate reasons for understanding why the radical factions have such deep-seated antipathy for English law and English culture. The reader understands the Irish mindset, the stubborn beliefs they cling to, their innate sense of humor that helps them cope with trauma and hardship. And you see bigotry uncovered for what it really is.

Servant characters usually allocated to minor supporting roles figure prominently in the first half of the story, especially Bastable the bigoted butler on the Benton estate and George, the beleaguered footman. "Murder or no murder," comes Bastable's reprimand to George, "the rector and Colonel Devenish will be wanting their boots and they're to be cleaned properly before they're brought up." The business of what happened to boots overnight may seem like a minor incident to every other character in the book except George who insists that one pair was not with the rest. He eventually loses his job over the boot incident since no one will believe his story. Knowing how missing boots and the cleaning of them pop up as clues in classic mystery fiction (The Hound of the Baskervilles and Trent's Last Case come to mind) I knew these scenes were not meant to be trivial at all. True enough the boot incident will have repercussions by the end of the novel.

INNOVATIONS: There may be an entire subgenre of mainstream novels about the Irish/English conflict. I can think of The Informer by Liam O'Flaherty and Odd Man Out by F.L. Green as two excellent examples. Wild Justice is the only Golden Age detective novel I have encountered where anti-Irish sentiment and the effect of Irish terrorism on innocent citizens plays such a major part in the story. In fact these themes serve as the underlying motive for the crimes revealed in the most unexpected manner in the powerful finale.

As far as ingenious use of clues there is a section in which a typewriter with a German keyboard turns up twice and the accidental use of umlauts (ä, ö, ü) is a telltale clue in a letter sent to the accused. Our parson narrator, who has been working on a monograph on medieval Irish monasteries, is called upon to use his knowledge of "old Irish" to authenticate the letter which employs several phrases in Gaelic, or Erse as the British characters call it here. The linguistic bits though not entirely fair play clues are fascinating. But the typewriter clue is perhaps the most damning piece of evidence. The discussion of the German typewriter keyboard comes up three times in the novel and astute readers will be able to use those scenes to unmask the killer long before the rest of the characters figure it out.

The closing argument of the defense attorney in the climactic murder trial is a brilliant example of legal rhetoric. He manages to do some clever reasoning and does his best to sway the jury to a verdict of not guilty by playing up reasonable doubt, the crucial phrase that can acquit a man of a crime.

QUOTES: On the narrator's inexpert participation at a hunting party: "I missed rather more than usual, and I always miss more than I hit. This does not trouble me, for I have a feeling that a parson ought not to be an expert at killing things, except, of course, fish."

"I am not an expert in Irish affairs but I hold strongly that it is a mistake to assume that anything that happens or ever has happened there is reasonable."

"I wondered at and greatly admired the way [Devenish] dealt with a fanatic like O'Callaghan. I should just as soon have tried to make a joke to an American Methodist Minister about Prohibition."

"He had been foolish enough to slay his man in England, a country in which the old-fashioned prejudice against unauthorized killing still survives."

Bastable's bigotry: "...there wasn't much blood, sir. So Mrs. Mudge informed me. Not so much as might be anticipated, considering that the parties concerned were both Irish."

Bastable again: "Now, I'm Church, sir, and I've always voted Conservative. But what I say is, that if a man would rather be Chapel [Roman Catholic] and vote Liberal that's his business and no affair of mine. But the Irish is different from us, sir."


THE AUTHOR: "George A. Birmingham" is the chosen pen name of James Owen Hannay (1865-1950). Hannay was born in Belfast, educated in Ireland and was ordained a Church of Ireland clergyman in 1889. He served at various churches throughout Ireland and was an army chaplain during WW1. In 1922 he joined an ambassadorship to Budapest. After his time in Hungary he settled in England and remained there for the rest of his life. He began writing novels in 1905 focusing on his critical view of Irish politics in his first novel The Seething Pot. Then he turned to comic novels for which he is best known continuing his critical viewpoint in a gentle satirical vein. Late in his writing career he wrote a handful of detective and crime novels the most noteworthy being The Hymn Tune Mystery (1930), also with a clergyman narrator, that deals with the murder of an organ player and a clever cryptogram that can only be solved with a knowledge of reading music.

THINGS I LEARNED: Stumbled across a very unusual word: peccant - guilty of committing sin. The sentence where this is used: "It was horrible to feel that a fellow human being, however guilty he might be, was being walled in, as they say peccant nuns sometimes were in the dark ages." That's some metaphor!

I was caught up in the section on Gaelic grammar and vocabulary. It went on for about ten pages but I never found it boring. Learned all about the placement of vowels, subtleties in Irish grammar that affect connotation and meaning, and that A chara dhilis is the way to write "My dear friend" in a Irish letter salutation. Also that the Gaelic name Diarmuid is pronounced something close to "Jeermood" in English.

EASY TO FIND? I found this book through serendipitous browsing at BookMan BookWoman, a used bookstore in Nashville, during a weekend getaway earlier this month. The store was having a sale -- $9.95 for every hardcover mystery book no matter what the price marked inside. How fortuitous! (as some Victorian character might exclaim.) I took every vintage mystery I could find that I didn't already own. Wild Justice was the most unusual and the oldest in the small pile of books I purchased. I already knew of Birmingham from my reading The Hymn Tune Mystery several years ago. To my surprise an internet search turned up 14 more copies of Wild Justice mostly of the various Methuen editions, but none with a complete DJ like mine. My copy is a 1935 reprint. It apparently was selling well -- the 1935 edition is the fifth printing since it's original publication in 1930. There are also US reprints from Jacobsen out there to buy. All but one are reasonably priced ranging from $5 to $15. Such deals for a rather excellent yet utterly forgotten detective novel by an undeservedly forgotten writer. I doubt there are any digital copies, but I didn't bother to look for them.