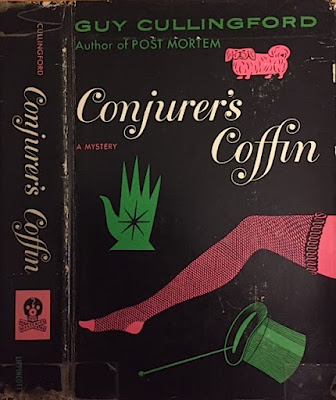 THE STORY: Jess Milk is the newly hired front desk clerk at Hotel Bellevue which caters to second rate entertainers touring the music halls of England. Queen Elizabeth II's coronation is fast approaching and the hotel owner Madame Lefevre is eagerly looking forward to the tourist trade and their money. Then Lulu, Madame's spoiled Pomeranian, escapes. Miss Milk feels largely responsible and she is determined to locate the missing dog. Disappearances are not just confined to pets. A magician's lovely assistant also vanishes from the hotel and suddenly the talk of the impending coronation turns to whispered conversations about jealous wives, philandering husbands and murder.

THE CHARACTERS: Miss Milk first comes off as too prim and proper, a bit too honest and I wasn't sure I would warm up to her.  This characterization, however, is all part of Cullingford's design. As the story slowly progresses and the plot begins to take shape Jess does indeed become a likeable woman, albeit a victim of her own goodness and integrity. She is sharply contrasted with the Lefevre family who run the hotel and the assortment of eccentrics and shifty entertainers who make up the hotel residents all of whom seem to be exploiting Miss Milk's honesty and innate kindness.

This is also a very funny book, but it's that quiet wry British style of humor.  An acquired taste for some. Miss Milk is befriended by elderly Miss Watkins and they make a date to visit the Chinese restaurant down the street from the Hotel Bellevue, a treat for both of them who have never eaten Chinese food.  The sequence really has nothing to do with the plot but it's hysterical all the same,  perhaps somewhat spoiled by the usual patronizing humor aimed at ingratiating Chinese waiters who speak pidgin English. Cullingford also uses the book to satirize the British obsession with the Royals in the depiction of Coronation mania.  Self-absorbed writer Mr. Crabbe who is having difficulty finding a marketable subject matter for his next book finally settles on a sea adventure and his amusing dilemma over creating a title leads to his musing about the Shakespeare quote "There is a tide in the affairs of men which taken at the flood leads on to fortune." He thinks There Is a Tide ought to be good then considers shortening it to simply Tide until Miss Milk reminds him "That's a soapless powder for washing things."  Crabbe counters with "What about Taken at the Flood?" but Miss Milk spoils that one, too. She says, "You can't have that one either. It's an Agatha Christie." "Drat you girl," Mr Crabbe fires back. "You're an artist's nightmare!"

INNOVATIONS:  I liked that Miss Milk's dear friend Captain Homes talks about the art of misdirection that is a magician's stock in trade early in the book and how that will color the entire story. The hotel itself is both literally and figuratively the Conjurer's Coffin (1954) with an unusually shaped corridor that resembles a traditional casket shape and rooms that seem to swallow up women who vanish without a trace. By the midpoint of the novel a clear criminal plot has been revealed and by the end that plot is complicated by an unexpected additional conspiracy to cover up all the crimes. It's almost as if everyone in the story is guilty of something which makes this book something of a crime fiction tour de force. Certainly, Cullingford is turning the genre on its head and breaking a few rules. 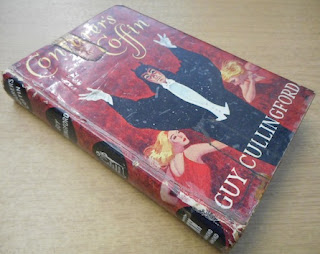 QUOTES: Crabbe about his ongoing writer's block: "I'm so whacked for ideas that I reckon I shall have to do Coronation festivities in the village.  Do you think the public will stand for that?"
Miss Milk: "I should think that people will be so fed up with the Coronation by the time it's over that they won't want to hear another word about it as long as they live."

"They don't turn mattresses in places like this," explained the sergeant sourly. "Not if it's up to one of those hussies I saw slouching round the corridors this morning. Never turned a mattress in her life."

What the [policewoman] had to tell him had struck him as an outlandish story, though no queerer than some which had come his way before.  He had long realized that truth is stranger than fiction, nature more fantastic than art, and he thought the imaginations of detective-story writers impoverished indeed.

But the last days before [the Coronation] which had been part of the fabric of English life for at least half a year, which had been thrust before the eyes of the people by Press and television, which had been dinned into their ears by the BBC, and been pushed into their hands by manufacturers in the shape of pots, trays, waste-paper baskets and whatever article would take an impress of it, until they were delirious, bored or exasperated, according to their temperaments: these days hurried by in a frenzy of last minute arrangements. 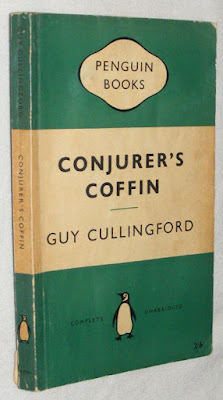 THE AUTHOR: Guy Cullingford is the male pseudonym created by Constance Lindsey Taylor when she decided to write crime fiction full time. Her first detective novel, Murder with Relish, is modeled on the traditional country house murder mystery and was published under her own name. However, the book was lost in the sea of similar stories perhaps in large part due to the nostalgic flavor of the action being set in "the concluding years of King George V" though it was published in 1948. Her first novel using her new male alter ego -- Post Mortem (reviewed on this blog here) -- was a minor sensation, gaining rave reviews from both sides of the Atlantic, and got her the recognition she was longing for. Taylor wrote a total of nine novels and several short stories many of which appeared in EQMM well into the early 1970s. She also wrote original scripts for British television.

EASY TO FIND?  The Penguin paperback seems to be fairly easy to find for all you who live on the other side of the Atlantic. I guess it's fairly affordable for US readers -- if you're willing to pay up to $26 to some greedy bookseller to ship you a lightweight paperback overseas. But the US or UK hardback editions are unfortunately next to impossible to find for sale these days.  I bought my US edition with the apparently very scare DJ for something like $7.50 about five years ago when I first became interested in Taylor's books under her Cullingford guise. Some enterprising reprint publisher ought to reissue all of her books.  I think they're something very special among crime novels of the mid twentieth century. But of course you'd have to be drawn to intelligent literate writing, imaginative characters, and subtle twists in crime fiction conventions. She was decades ahead of the game, in my opinion.
Posted by J F Norris at 12:07 AM