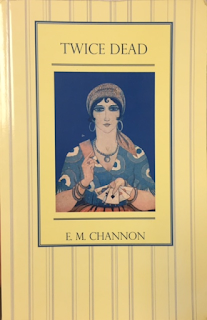 Three men are all attracted to the beautiful but haughty Sylvia Marlowe. Philip Braden, is her intended fiancé, but she wants nothing to do with him. Dr. Mackay, the locum tenens, is slowly taking over the practice of ancient Dr. Mapp and has his eye on Sylvia as well but is guarded about expressing his affection for her. And then there’s the man Sylvia would like to propose to her Tom Brent, a young pastor with a devilish temperament. Needless to say there is a lot of unspoken affection going on in this quasi Jane Austen romance disguised as a detective novel.

Enter Grace Winch, former nurse and ex-actress, still clinging to her melodramatic stage talents in her work as a fortune teller for hire. Grace predicts some horrible futures for several guests at a garden party hosted by the imperious Lady Braden, Philip’s aunt. One of the predictions is that Philip will suffer “a double death for [his] end.” Not surprisingly this scares the bejesus out of not only Philip but Sylvia and Tom. Soon we learn that Grace is a malicious woman who has a very mercenary reason for taking advantage of Philip’s fear of a bizarre death, especially one by premature burial. She has been intimately acquainted with him in the past. Her connection to him is fairly easy to guess even before she drops her many unsubtle hints of the scandal it would cause should she tell all. She is also privy to some secrets in Dr. Mackay’s past. You’d think Grace will turn out to be the victim, but no. Her prediction for Philip’s double death indeed comes true and serves as the half-hearted detective novel plot that makes up some of the story in Twice Dead (1930) by E. M. Channon.

This is a mix of an inverted detective novel and a traditional mystery. The surprises are not at all surprising due to the manner of storytelling which robs all suspense from the book. Channon chooses to have us follow the thoughts and actions of Grace, a wicked woman who resorts to blackmail and extortion with everyone she encounters. Her aim is revenge on a grand scale. She’s oddly the embodiment of a nihilistic worldview in a book that is otherwise extremely conventional in its outlook. Grace cares so little for her own life that she commits suicide in a manner that will make it appear that one of her enemies be suspected of her murder.

Another character in the story, Sylvia’s cousin Anne, is just as spiteful in her behavior. She too has been rejected and wronged by Philip. The book is concerned more with soap opera melodrama -- engagements gone wrong, rumors and whispered lies, unrequited love, unspoken love held close to the hearts of the mostly stubborn characters in the book. Channon describes Sylvia as a "brainy woman" but her actions tell us otherwise. She refuses to tell the man she loves how she feels about him relying instead -- as will happen in these Austen-like novels -- on second hand reports of his life and rumors of an intended marriage to another woman. Then Sylvia sits back and sulks and mopes that she will never be happy. She never directly asks Tom for the truth until the end of the book. Shades of Sense and Sensibility, right? Except there’s no elegance or dramatic irony in this book.

Meanwhile Tom Brent tries to act as amateur detective of the piece but only solves the mystery of Philip's double death when he stumbles across the not-so-shocking truth through sheer accident. There are two endings with two culprits revealed through monologue confessions. One done in an over-the-top melodramatic sequence clearly inspired by Macbeth and the other an anti-climactic verbal confession done very matter-of-factly and dully. Both villains are allowed to escape punishment and live out their lives as an example of forgiveness and second chances at happiness.

I found the whole thing utterly unsatisfying from its ersatz melodrama to its naive worldview about love. Most off-putting is Channon’s preference to explain everyone’s thoughts and actions. She adopts a “gentle reader” omniscient narrative voice peculiar to early 19th century novels making continual sideline commentary rather than allowing the reader to discover who the characters are through their actions and deeds. This is probably due to Channon’s primary career as a writer of juvenile novels set in girls’ schools. Most of these adult women act like Edwardian "mean girls" and the men are pretty stereotyped, too. There’s not much here to recommend even as a quaint period piece. There are dozens of similar stories better written, better plotted, and much more maturely handled.

For a different view of Channon as a mystery writer see Kate Jackson’s review of The Chimney Murder one of the other four crime novels Channon wrote. Both Twice Dead and The Chimney Murder have been reprinted by Greyladies, an indie press responsible for reissuing the work of forgotten women writers in limited paperback editions. The reissues are a mix of children’s books, detective fiction, and romantic novels that seem aimed primarily at a female audience. THINGS I LEARNED: Late in the book Lady Braden exclaims, “This isn’t a Duchess Novelette!” This of course sent me on a ten minute Google search in order to track down the source of that obscure reference. I uncovered one single photograph of an old story newspaper called fittingly Duchess Novelette. Apparently this was one of many short-lived “penny dreadful” romance pulp magazines published in England during the Victorian and Edwardian eras. While the bulk of the penny dreadfuls were filled with lurid stories of gory, blood-soaked crimes with grotesque characters the romance pulps told stories of cads toying with the affections of women and the dirty deeds they are driven to when they’ve been wronged.

The title is taken from a quotation found in Jude 1:12, 13. Again it is Lady Braden, the novel’s resident literary allusionist, who quotes the passage: “[C]louds they are without water, carried about of winds; trees whose fruit withereth, without fruit, twice dead, plucked up by the roots.” She is referring to more than just Philip’s unusual demise. The observations made by Lady Braden and Grace Winch, two women of entirely different make-up and contrasting worldviews, were the only reasons I kept reading the book.
Posted by J F Norris at 3:09 PM