The Wedding Guest Sat on a Stone - Richard Shattuck 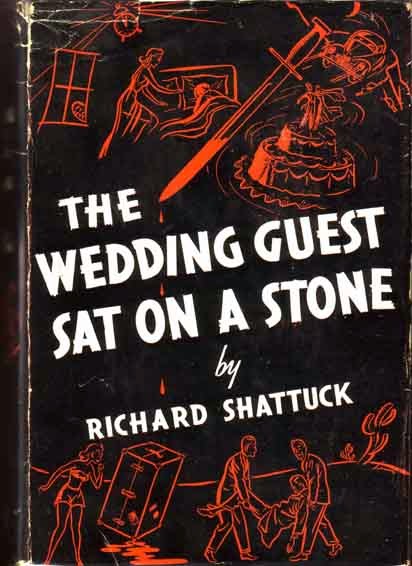 The New York Times reviewer for The Wedding Guest Sat on a Stone (1940) called it "...hilariously funny...a real mystery". Marcia Muller wrote a praiseworthy essay for 1001 Midnights calling the same book "wonderfully amusing...with rich bawdy (for its time) humor." I know I have a sense of humor, but maybe mine is a bit more refined or too quirky. I didn't find much of this book hilarious at all. In fact, I thought much of the humor was simple-minded and tedious.

The unusual title comes from Coleridge's Gothic poem The Ancient Mariner and each chapter begins with an epigram from the same poem.  As the book takes place during the honeymoon of Sue and Ty Grant it seems appropriate to have a poem about doom and death during a wedding celebration as an ironic source from which to draw allusions. The characters also inexplicably and surprisingly make several highbrow literary references during the action. I say surprisingly because they all act like imbeciles for the bulk of the book. You'd never think they had the smarts to read half the works they make reference to.

The entire plot is predicated on the old screwball mystery gimmick of hiding a dead body. Craig Rice did it in The Corpse Steps Out, Jack Trevor Story did it in The Trouble with Harry, but those books at least made me crack a smile. I was rolling my eyes while reading Shattuck's book. Not one chuckle. Not even a snicker. Even with the early bedroom farce bits with Sue running around in her nightgown and crawling into bed (nude, it is implied) with the dead body I failed to see the humor.  Later, in an equal opportunity semi-nude scene, her husband runs around town in his underwear. Hilarious.

One of the problems with the plot lies in the reasoning for hiding the body in the first place. Four people enter a conspiracy in order to protect Sue -- including Milly, the owner of the hotel "hilariously" named La Cucaracha -- all because they don't want Sue's honeymoon ruined and have the police crawling all over the place. Plus, the murder victim just happens to be one of those characters everyone hates, though the reader never gets to see any behavior that would support the antipathy everyone feels for him. Once he's dead he becomes a prop. He never was human even when he was so briefly alive in the story.

So the first half of the book is filled with "hilarious" hiding the body sequences. They take him to a walk in refrigerator, then when the meat is delivered they move him somewhere else at around 2 AM using the ancient and unreliable elevator. Guess what? That's right -- the elevator breaks down. More "hilarity" ensues as the people in the elevator are rescued via a ladder and the attempts to get the now rigor mortis-ized corpse out of the elevator. They are forced to leave the corpse there and wait until someone accidentally discovers it the next day when the elevator is summoned. But, of course, the corpse vanishes and the conspirators have no idea where it went. Until the police show up and tell them.

When they aren't hiding the body they're all drinking. And drinking. They've all attended the Thorne Smith School for Hilarious Heavy Drinking Fictional Characters. The assortment of cocktails and libations that turn up include lime rickey, sidecar, Tom Collins, sloe gin fizz, brandy (and anything that uses it as an ingredient),  whiskey and splash (also ordered as "corn and ditch"), and whiskey straight up for the battle-scarred WWI veteran who hardly speaks at all over the course of the book. Even the cops are pouring whiskey and knocking back drinks while interviewing the suspects! There was one drink I'd never heard of -- an angel's kiss. Apparently it contains apricot brandy and is topped with whipped cream. Sounds more like a dessert!

The only interesting aspect of the novel to me was a barbecue party at a "dude mine." One of the wealthier characters, Cedric Jones, has purchased an old mine and turned it into a sort of adult playground where people can simulate what it feels like to be a miner by descending into the caverns wearing denim overalls and carbide light helmets and play at digging for gold. Problem is Cedric also simulates realistic perils that endanger the lives of his guests. Getting trapped two hundred feet below ground by an engineered rock slide! Hilarious, ain't it?

This didn't do it for me at all. Even the mystery itself is lacking in the kind of puzzle elements that make a mystery entertaining for me. The culprit is fairly obvious as he is depicted as the most hateful person in this group of clowns and buffoons. The clues about his character are all there in his dialogue. Real evidence is lacking. A convenient eyewitness in the form of a little old lady turns up at the eleventh hour in order to give the only real proof of the murderer's guilt. It's all a bit of an anticlimax when the murderer is named and caught.

I was excited about finding a copy of this hard to find book but utterly disappointed in its content.  Here's another case of a mystery highly praised that turns out to be nothing but hyperbole. If you want real hilarity I say stick with Alice Tilton or Craig Rice. You'd best skip Richard Shattuck...who is really Dora Shattuck anyway.

This counts towards another space filled on my Golden Age Vintage Mystery Reading Challenge Bingo Card.  The space is O1 ("A Book Published under More Than One Title"). 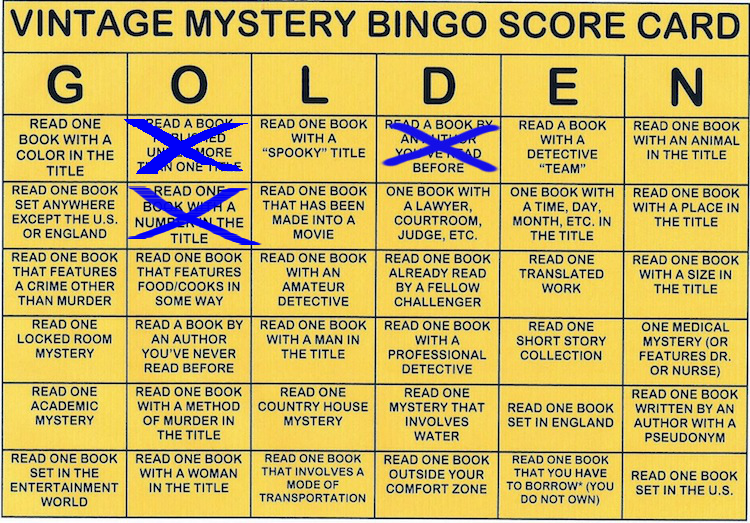