FFB: Catt Out of the Bag - Clifford Witting

As some wise old person once said to me ages ago "Never put off until tomorrow what you can do a week from now." Wait a minute, that's not it. That was my wiseass comeback to the wise old person's advice about procrastination. Probably a parent or teacher, I can't remember anymore. All this is a rambling preamble to my excuse of being behind with what was intended to be a Christmas book review. Catt Out of the Bag (1939) is set between December 21 and December 31 and would've been perfectly suited for my final post of 2013. But here it is the third day of 2014 and I'm finally getting around to letting you know about this very fine detective novel from a writer I only discovered last year.

Had this fourth mystery from the talented and genuinely funny Witting been published in the US it would've been a great choice for the Dell Mapback series. My paperback reprint edition (it's extremely scarce in any edition for what it's worth. But you probably knew that already) comes with a beautifully hand drawn map of Paulsfield where the crimes take place so it is predisposed for Mapback status right off the bat. Had I been alive back then and been employed by the estimable Dell Publishing Company I would have written a fantastic little blurb for this holiday themed detective novel. For those of you unfamiliar with Dell Mapbacks the books have tantalizing lists of suspects ("Persons this Mystery is about") and a page headed "Things this Mystery is about" followed by a series of cryptic clues and plot elements that are meant to entice the reader to buy the book. So what is this mystery about, anyway, I hear you ask?

And the "Persons this Mystery is about"-- 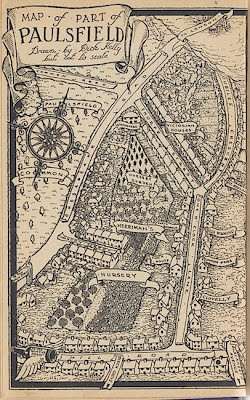 John Rutherford - former bookseller and narrator of the tale. He teams up with...
Inspector Charlton - your typically sharp as a tack Scotland Yard official
Sybil De Frayne - organizer of the caroling night intended to raise money for a local hospital. A bossy nag of woman married to...
Charles De Frayne - puts up with his wife's demands at the expense of his happiness
Thomas Vavasour - one of the townspeople assigned to collect money while the carolers are singing. He disappears without a trace at approximately 9:25 PM along with his collection box
Mrs. Vavasour - at home recovering from an illness the night of the caroling. She has no idea where her husband has gone to let alone what kind of work he does or who he works for as a "commercial traveler"
Harold Cornthwaite - composer of the original carol "In Wintertime in Bethlehem" a tune that has a haunting familiarity to a few of the suspects
Raymond Cloud-Gledhill - guest at the De Frayne home who sees the disappearance of Vavasour as an adventure and a chance to turn amateur sleuth
Mr. Tipper - a hairdresser with an ear for gossip
Albert Miles - a vagabond known for committing petty crimes. He has a sharp sense of smell, a memory for unusual sights, and is missing two fingers from his right hand


The investigation into Mr. Vavasour's disappearance grows ever more complex as multiple identities of the victim are uncovered and a plethora of mysterious findings complicate the case. The title of the book with its odd spelling ought to tip off any sharp-witted reader to the possibility of alter egos. Charlton and Rutherford encounter a veritable Dickensian cast of characters, all drawn with Witting's characteristic lively and colorful touches and an ample amount of his customary wit. Witting also pulls off a neat trick when Rutherford, the first person narrator, uses his imagination to recount second and third hand events that were told to him by Charlton and others. This, Rutherford confesses, allows him to eliminate the cumbersome style of quoting passages of dialogue with "inverted commas".

It may take some hunting to locate a copy of this book. I lucked out in one of my tours of the eBay auctions in the late summer of last year. The book was only published in the UK and exists in hardback and at least two paperback editions, both of which I used to illustrate this post. As I've said before in my reviews of Clifford Witting's books some enterprising publisher ought to reprint his detective novels. So far I haven't read a single one that fails to deliver. And Catt Out of the Bag is surely the best of the lot I've read to date.

Other Clifford Witting books previously reviewed on this blog: