Drawing on the Past #13: G.K. CHESTERTON

While researching Victor L. Whitechurch, whose books I am currently reading, I came across a fascinating post at the website for Indiana University's Lilly Library which has one of the most remarkable collections of detective and crime fiction in the United States. Back in 1973 the library celebrated the 130th anniversary of the publication of "The Murders in the Rue Morgue" with an exhibit entitled "The First Hundred Years of Detective Fiction, 1841-1941."

Among the books are some other ephemera including the drawing reproduced below.  I've long known of G. K. Chesterton's ability as a sketch artist and cartoonist but never knew that he was commissioned to illustrate an edition of Sherlock Holmes stories. Below is his rendering of the near fatal struggle on the cliffs of the Reichenbach Falls. 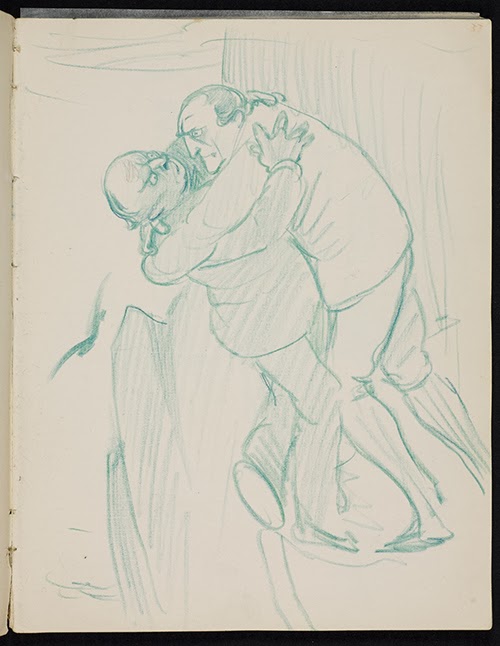 The note in the exhibit catalog accompanying this drawing says:

G. K. Chesterton was once commissioned to illustrate the Doyle stories (imagine Father Brown on Sherlock Holmes)! The volume was never published, but Lilly has his sketches, among them the Reichenbach scene, done in blue crayon.

The entire contents of the exhibit along with program notes are posted at the Lilly Library website here.  It's an excellent resource for any devotee of the history of detective fiction. I've already made note of three writers who until I read the catalog I had never heard of. Unfortunately, the exhibit's catalog notes for one of those writers ruined a book for me by revealing the ending.
Posted by J F Norris at 9:09 AM