Haunted by a Movie 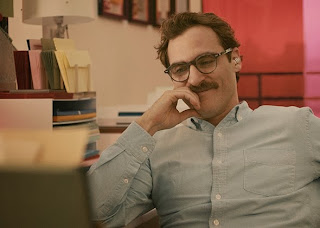 Yes, this is supposed to be a book blog but I went to see a movie by myself (as I almost always do) and I was so overwhelmed by the mixture of emotions I felt and now I have no one to talk to about it. So let me invite discussion with any of you out there who may have seen it.

The movie was Her with Joaquin Phoenix as a lonely man on the verge of a divorce who slowly falls in love with an operating system named Samantha. Set in a not too distant future where everyone seems to be talking to themselves but is actually conversing with artificial intelligence systems that have the ability to manage nearly every facet of one's life, Her is a very odd movie in which we learn how absurd relationships can be. But it is in the extremes to which lonely people will go in order to find any sort of connection that will bring them joy that is the most profound aspect of the movie.

When stripped to its bare essentials Her is the story of a man falling in love with a computer. It sounds like it would be a great comedy, and though it is funny and amusing at times the overall tone is more serious. It turns out to be an oddly beautiful and poignant movie thanks largely to Phoenix' nuanced and entirely grounded performance. I was reminded of As She Climbed Across the Table, a novel Jonathan Lethem wrote during his early career when he was toying with science fiction and fantasy. There are also elements of Colossus: The Forbin Project, especially in the very strange, somewhat ambiguous ending.

I was both disturbed and profoundly moved by what I saw. Granted there are several instances when it's just absurd and not a little bit creepy (the sex scene in particular and the very sad sequence with the sex surrogate). Yet I think it has a lot to teach about the ultimate mystery of life -- falling in love -- and the importance of not caring what other people think about you as you try to find joy in a world that increasingly seems to rob of us of that elusive state.

Anyone see Her yet? Any thoughts? I'm eager to talk about this with anyone.
Posted by J F Norris at 9:18 AM