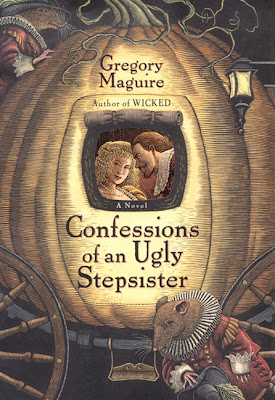 Long before Gregory Maguire's first book Wicked became a huge hit on Broadway (3388 performances and still going strong) he was still a fairly unknown writer concocting some imaginative reworkings of familiar fairy tales and children's books. Now with a blockbuster Broadway musical fashioned from his book Maguire has gained the kind of attention his books should have given more than a decade ago. His second book - Confessions of an Ugly Stepsister (1999) - still remains my favorite of all his work and ought to be as well known as Wicked.  But I fear it has been overshadowed and is long forgotten due to the musical and the sequels Maguire has written as part of his re-imagined Oz.

Just when you think there have been too many re-imagined versions of well-known fairy tales along comes one that brilliantly reinvents perhaps the archetype of all fairy tales. Maguire, who with Wicked wrote a subversively political tale about Baum's Wicked Witch of the West, surpasses his debut novel with this compassionate tale of beauty and familial duty. Once again his richly detailed prose captures that feeling of a once upon a time that true fairy tales require and does so without ever appearing artificial.

This story of Iris and Ruth, their complex mother Margarethe, and their stepsister Clara of the "afflicted eternal beauty" is filled with wonderfully shaded characterizations that never fall into that good/evil dichotomy that Grimm and Perrault use in telling the original versions of Cinderella. Can kindness reside within ugliness? Is beauty and attractiveness really something to be envious of? Is a mother's apparent tyrannical household an environment that will produce wickedness? Is a nearly mute sibling nothing more than a drudge to babysit? Find the answers to these not so simple questions within Maguire's excellent story and be prepared to be reassess your own prejudices about the ugly and the beautiful.

This review (in a slightly different form) was written for amazon.com back in 1999 when the book was originally published. That's right, it's a new year and already I've become a lazy slob stealing my reviews from the interweb and posting them on my blog.  Shameful.
Posted by J F Norris at 1:00 AM