FFB: Do Not Disturb - Helen McCloy 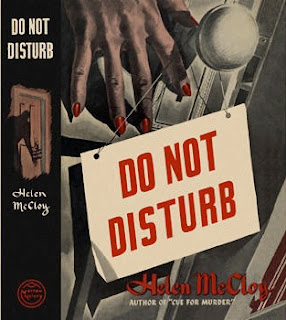 Edith Talbot has fled Paris and her ex-husband to return to New York for a well deserved break. She takes up residence in the Hotel Majestic where she begrudgingly is given the only room available. It turns out to be next door to Room 1404 from which horrible crying can be heard – the crying and sobbing of what she believes to be an adult male. She is tempted to knock on the door but notices the "Do Not Disturb" sign on door and decides to honor the request.

The next day she mentions the incident to the desk clerk who reveals that the room she is staying in was reserved by the man in Room 1404. He is Dr. Melchior, a psychiatrist, traveling with his son who is suffering from a painful ailment. Melchior wanted to reserve the room adjacent (where Edith is staying) but not use it so that no one would be bothered by his son's frequent crying and moaning. The desk clerk reluctantly gave the room to Edith because she was insistent on staying in the hotel. Edith thinks the doctor's reasoning is odd but returns to her room.

The second night she hears a piercing scream and rushes to the room next door to find out exactly what is going on. This time she ignores the "Do Not Disturb" sign and knocks until she gets an answer. The man who opens the door identifies himself as Captain Gorgas of the New York Police. After Edith's persistent questioning he tells her they are interrogating a suspect in a crime and she should return to her room and forget anything she may have heard. It's none of her business. He closes the door in her face leaving her puzzled as to where Dr. Melchior and his son might be since they are the ones who should be in the room.

Edith leaves to visit a friend the next day and when she returns that night she discovers a dead body in her room. The man resembles one of the men she had seen when Gorgas opened the door to Room 1404. And she does what any character in a suspense novel would do – she flees the hotel in search of help.

But by doing so she inadvertently sets herself up as the accused. Soon her photograph is in all the newspapers as a woman wanted for questioning in the man's murder. Everywhere she turns she thinks someone is part of a plot to capture her and turn her into the police. She spends the entire book trying to find somewhere that is safe, someone who she can trust, who will believe her story and help her find who really killed the man in her hotel room.

This is not a detective novel, though there are elements of crime solving. Dr. Basil Willing, McCloy's usual series detective, is nowhere in sight. This is a pure cat-and-mouse pursuit thriller. But Do Not Disturb (1943) is not as fast paced as it could be due to McCloy's usual fondness for didactic passages in both the dialog and the prose. While there tends to be far too much intellectualizing on Edith's part, and lots of talk about the psychology of criminal behavior, there is also some fascinating background on life in WW2 era America – both urban and rural viewpoints. Gas rationing and its impact on traffic, air raid patrols, blackouts in buildings of fifteen stories or taller all play an important part in the story as Edith flees the city, with the police hot on her heels, to head for Pennsylvania to seek refuge with her former high school friend.

There is a very odd scene where she is helped by an overly friendly couple in the Pennsylvania hills. After escaping from a bus full of inquisitive passengers one of whom recognizes her from her infamous newspaper photo and sends out the alarm she trudges through the woods, comes across a house. Comforted by a German Shepherd and a black cat that greet her and practically invite her inside she enters the unlocked home just like Goldilocks in need of food and shelter. Inside, the unnamed man and woman treat her like their own child, feed her, chit chat with her about their life, then leave her to watch over the house while they head out for a church function. Edith is rightly suspicious of their behavior but after more rationalizing and intellectualizing decides they mean well. As it turns out she is not as safe as she thought when they leave the house. It is one of many scenes that McCloy creates to lull the reader into a false sense of Edith's safety only to let loose with a barrage of unexpected violence.

I was reminded of so many Hitchcock films like The Wrong Man, and especially The 39 Steps, while reading McCloy's book. It is relentless in its themes of pursuit and the wrongly accused. It even employs Hitchcock's favorite plot gimmick of "find the MacGuffin" as so many of the villains believe that Edith is in possession of that "something special" yet she hasn't a clue what it is.

The book shifts into a quasi-spy thriller when Edith is abducted (for the third time!) and returned to New York where she encounters more suspicious police and a lawyer named Charles Henderson who is adamant that Edith has that "something special" in her possession and demands its return. Strangely, her ex-husband Lucien will turn up in the course of the twisty plot and prove to be her most trustworthy ally. Or is he really at the core of it all? Typical of these kinds of suspense thrillers the element of paranoia, Edith's constant weighing of who is trustworthy or not, takes over. Though we see the action only through Edith's eyes it is just as difficult for the reader to determine who are the good guys and who are the baddies.
Posted by J F Norris at 1:00 AM