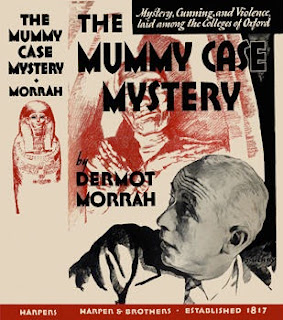 There are few university set mysteries that are as deeply immersed in academia as the sole detective novel by Dermot Morrah. With few exceptions the entire cast is made up of college professors or university officials and their world is confined to the ivy covered halls of Beaufort College, Oxford. At the heart of the story is an academic rivalry centered on the minutiae of highly specialized Egyptology research. When a dreadful accident occurs and one of their own turns up dead all that matters is that the university not suffer scandal.

A fire occurs in the rooms of Peter Benchley, professor of Egyptology, where a newly purchased mummy was being temporarily stored.  The fire completely destroys his room and only one body is found inside, charred beyond recognition. The only items that can be found to identify the body are a wristwatch and a set of keys.  Denys Sargent, law professor, is not satisfied with the university's quick decision to settle the matter by calling it an accident and voting that Benchley be formally named as the charred corpse.  He wonders if the body is Benchley's, then what happened to the mummy?  And if the body is really the mummy, then where did Benchley go?  And could Benchley's rival, the Russian Egyptologist Feodor Bonoff, have something to do with the fire that is all too suspicious?  Sargent and his pal Humphrey Considine, ancient Assyria professor, set out to discover the answers to these riddles and more. 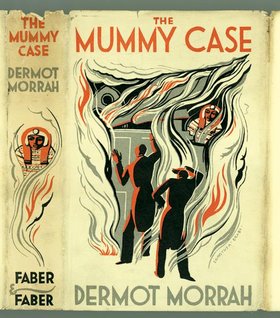 Even though the book sounds violent and gruesome from my plot summary the tone is lighthearted, the writing sharp, the humor acerbic, and the emphasis always on the cerebral not the criminal.  Over analysis may be the book's one fault. In Chapter 9 entitled "The Examiners" Sargent and Considine review sixteen separate points about the fire and the mysterious circumstances of the body, the mummy and what actually happened to Benchley. They outline all the possibilities and parameters in such detail it is easy to see through the culprit's deception. Yet even if the reader figures out the true identity of the charred body there are still a few delightful surprises in the amusing final chapters.

Of the many academic mysteries out there this is one of the best from the Golden Age.  Satiric, clever, with a very dry British humor - they don't seem to write them like this anymore. And I doubt you will find a better book that mixes crime and universities where the motives of the culprit are so thoroughly intellectual that only a professor could dream up such a scheme.

Luckily, this is one of the rare instances where you can buy a cheap copy of the book.  The Mummy Case Mystery was reissued in a paperback edition by Harper's Perennial Library in 1988 and a handful of copies are available from multiple online dealers.
Posted by J F Norris at 11:06 PM