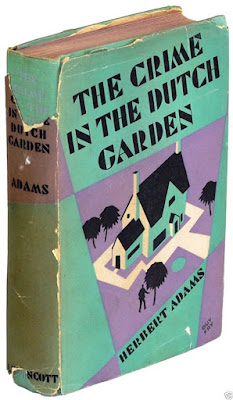 I lied. I said I was going to write up a Neglected Detectives entry on Jimmie Haswell, but this book is so rich and different that I had to give it special attention. Also, the three books I ordered by Herbert Adams turned out to be books without Haswell which threw a wrench into my plan to write up about three or four books with Haswell as the protagonist. What surprised me most about Crime in the Dutch Garden (1930) is that it is one of the few examples where the addition of multiple love stories works because love and the refusal of love are at the very core of the many mysteries of the plot.

Haswell visits newlywed cousin Donald and his wife Nancy (they both appeared in The Golden Ape, the book the immediately precedes this one in Adam's bibliography) and is asked to help solve the violent murder of Annabelle Querdling. She was found crushed to death by the statue of a satyr, something that will prove to be an ironic death when Haswell learns more about her personality.

Previously, Miss Querdling's niece Evelyn and her fiance Lionel Duckworth, visited Haswell to discuss the receipt of anonymous letters threatening Miss Querdling's life. Haswell wonders if her death a culmination of those threats. A chauffeur with a volatile temper is suspected. He had recently been sacked for showing an romantic interest in Miss Querdling's maid. Haswell soon learns that not only did Miss Querdling disapprove of the romance, but she has a neurotic antipathy for all romantic attachments and especially to the idea of marriage. Her revulsion of marriage is so far gone that she wants to prevent even her two nieces ever being happy with a husband and had plans to rewrite her will so that none of her money would go to the women if they were to marry. But the will has gone missing and thorough searches have turned up nothing.

Haswell is first and foremost a lawyer by profession. Similar to the stories by Melville Davisson Post featuring his devious lawyer Randolph Mason strange quirks in the law come into play in several of Herbert Adams' detective novels. The legal issues surrounding the withdrawal of an inheritance if a legatee were to marry are discussed at length and were a very interesting insight into British law.

The usual action thriller elements of Adams' early work give way to stronger character studies and a thematic exploration of love and marriage in the context of a criminal investigation. We learn that Evelyn is determined to marry Lionel despite her aunt's protestations. Her sister, Marjorie, on the other hand honors the aunt's wishes by remaining unattached. But who is Marjorie sneaking off to meet in the garden? It seems she has more to hide than Evelyn. Even the lives of the servants are affected by Annabelle Querdling's strange anti-romance obsession. Haswell's scenes with Janet, the maid who was engaged to marry the chauffeur, are some of the most poignant in the book. He has quite a humane and compassionate touch in dealing with the sensitive aspects in this investigation as opposed to the colder police methods of Supt. Richmond.

Detection, too, is on ample display in this book. Haswell and Supt. Richmond spend plenty of time going over the crime scenes discovering that a bench had been moved to better allow for an accurate hit when the statue was toppled. The statue itself is thoroughly examined and it is determined it was so finely constructed and keenly balanced that it could not have accidentally toppled from its mount. There is also some business with alibi checking with only Evelyn and Lionel seemingly out of the picture as they had retired to the parlor for piano playing and singing and were heard there fro the entire evening the night of the murder.

Miss Querdling's estate is bordered by a golf course and country club (see that excellent map endpapers below). Like many of Adams' books golf plays its part, but here it serves as more of a social background. A game of golf becomes the perfect excuse for several characters to have private conversations without the eavesdropping ears of other suspects or servants around.

Adams has all sorts of excellent touches in this book that may be overlooked by someone who approaches the book as a mere puzzle mystery. The victim abhors love and seems to shut out beauty, but lives in one of the most beautiful and romantic homes surrounded by artfully designed and lovingly cared for gardens. She is murdered with a statue of a mythological figure that symbolizes lust, a brilliant ironic touch. The site of her murder is one of the many picturesque, serene gardens that also happens to be a place where two characters have been having nighttime trysts.


The gardens themselves play an important role in the book not just serving as an unusual setting. I know this is going to sound pretentious but couldn't help but think of Shakepeare's plays and his forest and garden worlds where lovers are misunderstood or misaligned, where disguise and false identities impede and hinder the course of true love, but where in the end all is put right when foolishness is set aside, magic and illusion are dispelled, and common sense helps let true love prevail. All of this can be found in Adam's detective novel. While there's no fairy magic we can think of Haswell's deductions and brilliant insights as a sort of magic that allows the lovers to achieve their rightful union and deserved happiness.
Posted by J F Norris at 10:48 AM