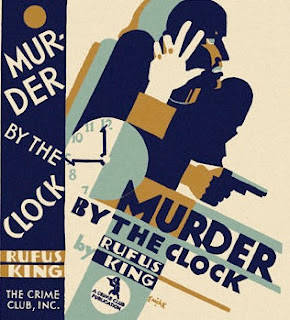 My latest addition to the Perilous Policemen part of the Vintage Mystery Reading Challenge takes me back to 1929 and the very first Lieutenant Valcour novel written by the unjustly dismissed Rufus King. It's been a long time since I've read a book from the late 1920s that seems more like something from the mid 20th century. By the time I finished the book I found more comparisons in the brooding psychological private eye novels of Ross MacDonald, the sexual temptresses of nearly every hard-boiled writer during the 1950s, and the paranoid urban households in so many paperback originals of the 1960s. King even flirts with elements of the surreal in this book classified as a detective novel from Doubleday's Crime Club, a publisher better known for traditional whodunits than this kind of literate novel that uses crime not as a means to entertain but as the springboard for delving in the darker recesses of human behavior.

Herbert Endicott, a philandering husband, is found dead in a walk in closet in his bedroom. There are some suspicious signs that lead Valcour to think foul play yet there is no sign of a weapon and no visible wound on the corpse to verify murder. But when the body refuses to stay dead and the suspects begin to voice their utter hatred for the victim I knew the book was going to stray far away from the typical "find the cigarette ash and footprints" stories that flooded the market in the 1920s. King's writing, too, is a big clue that this book is meant to be more than just a time passing entertainment. He has a way of capturing your attention with neat turns of phrase, lyrical styling, and an eccentric sense of humor.


How pleasant it would be he reflected, to come across the perfect imprint of a shoe [...] -- or what was it that was so popular at the moment? -- of course: the footprint of a gorilla. The case would then be technically known as an open-and-shut one. He'd simply take the train for California and arrest Lon Chaney, and-- But enough. 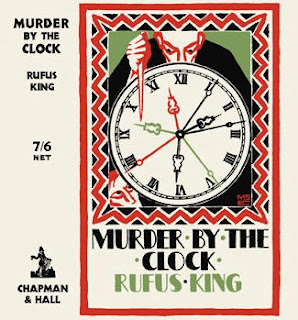 When the body is found there is no sign of any weapon. The police physician at first thinks Endicott has suffered a stroke or heart attack and his death is a natural one. Valcour finds evidence of another person being in the closet, and signs that Endicott's body has been searched. He suspects foul play and orders an autopsy of the body while it is still in the house. That's when the physician discovers that Endicott is still alive. Valcour then sets up a plan to keep Endicott guarded by both a nurse and two policemen to prevent another more fatal attack on Endicott. Perhaps he may even catch the culprit in the act of a second murder attempt.

A notable feature of the story is that it takes place in less than 12 hours, from 8:37 PM to 7:11 AM the following day, with the action almost entirely confined to the Endicott household. Valcour makes a few side trips to interview suspects not in the home and does so in the wee hours of the morning adding a very surreal element to the story. None of the characters seems to be too upset about someone knocking on their door at two or three in the morning – even if it is a policeman. In one case Valcour doesn't even get to identify himself since the woman who answers the door thinks he is Endicott. Valcour even allows her to badger him with questions for a few pages before he bothers to correct her assumption.

King experiments with the narrative. We mostly follow Valcour's point of view but on occasion he allows us into the thoughts of other characters. For example, we learn that Nurse Morrow who is put in charge of watching over Endicott, is a dreamy romantic woman who hopes her life will finally blossom into the kind of adventurous one she always imagined it would be:


The present case looked as a heaven sent oasis. Who knew what might not develop out of it? It awakened all the atrophied hunger of her starved sentimentalism. And even if nothing did result form it -- nothing practical, like marriage, or a good bonus -- it would at least leave her something to think about during those endless, tiresome, tiring hours of the future.

At the halfway mark of the one night's investigation Valcour finds Tom Hollander, a former war buddy of Endicott and who some members of the household think is the only man who Endicott can call a friend. Valcour sends for Hollander hoping that when Endicott recovers from his semi-comatose state he will confide in Hollander and reveal who attacked him. Events do not go as planned, however. Hollander is not the friend he presents himself as. Valcour inadvertently has placed Endicott's life in further danger.

There is an air of dread that settles over the Endicott household. Like a Gothic novel death settles upon everyone and everything. The characters become brooding, turn inward, and allow their imaginations to run wild. Nurse Morrow comments to the two policeman sharing her watch over Endicott that "there is something sinister" about it all. She notes a eerie quiet that "settled gently on the house. The stillness of a grave." Mrs. Endicott's lugubrious servant Roberts, meanwhile, dwells on her haunted past. She reveals that she cannot abide her employer, pesters Valcour with odd questions like if he believes that "the dead [can] remain in emotional touch with the living." She drops several hints that Mrs. Endicott and Hollander were probably having an affair of their own. But is there proof or is it merely the product of Roberts' jealous and confused mind? Later Valcour describes Roberts as "the shortest step this side of some fervour bred in the swamp of lunacy." Menace, madness, and death are everywhere Valcour turns.

Despite all his efforts to protect Endicott the murderer does make a second and successful attempt on his life. But it seems nearly impossible. With two policeman in the room and a nurse on duty could someone really have fired a gun from the balcony through the small opening where the window was raised and struck Endicott fatally wounding him? In the remaining three hours of the book's plot Valcour manages to unearth more secrets, prevent a suicide attempt, and find the hiding place of the murderer who has remained in the house the entire night.

Murder by the Clock is unlike any other American mystery I have read from this era. True, there is detection and the policeman hero is doggedly determined to bring in the villain of the piece, but the emphasis here seems to be less on the mechanics of the criminal investigation and more on the after effects of the crime as it alters the lives of the Endicott household. In this respect King's novel is far more modern than one would expect for his era. He may have been one of the earliest writers to explore the real drama inherent in crime and its aftermath rather than exploiting a fictional murder as a mere puzzle entertainment.
Posted by J F Norris at 2:05 PM