"Don't ever die before your time. If you die, make sure you're playing the part yourself. You find out very unkind things about the human race otherwise."
--Kerry Garth in Benefit Performance 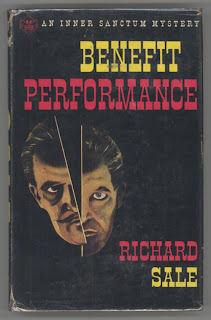 For the first few chapters of Richard Sale's Benefit Performance (1946) I thought I had stumbled upon an overlooked alternative classic. The plot became increasingly insane reminiscent of one of the paranoid menace thrillers of Cornell Woolrich. There were prize sentences chockful of idiosyncratic adjective choices that were signaling Loony Tunes music cues in my imaginary soundtrack for the book and sent me thumbing through my Funk and Wagnall's for elucidation. Most of them all occurring in one chapter, strangely enough.

The slap sent his dark glasses free-wheeling across the room, raised galactic meteors on the curtain of his mind and stung like the devil.

The sun vanished in the well-ordered and dramatic delitescense of the joint.

Madrilene? Unless you're a sous chef or a gourmet I doubt that will ring a bell. Turns out it's a fancy soup, specifically "a consommé flavored with tomato, often served jellied and chilled." Delitescence? Over my head again. The lexicographers of the interweb tell me it means obfuscation or concealment. Learned a new word, but I doubt it'll find its way into everyday use for me. 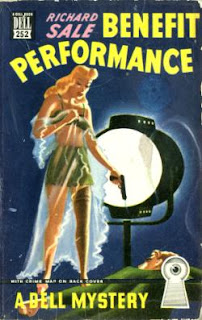 Once we clear the wreckage of Chapter 12 the writing slowly descends from the orbit of pulpy outer space and returns firmly to planet Earth. The story is fast paced maze of deception and murder plots, peppered with typical wise cracking dialog, and populated with shapely, scantily clad dames and pistol packing thugs. Though most of the characters are involved in the movie industry we might as well be in the underworld of New York or Chicago what with all the stolen guns and bullets flying everywhere.
In a nutshell...or maybe something slightly bigger:  Kerry Garth, movie actor, awakens from a drunken stupor to discover he's been shot and killed.  Or rather that his movie stand-in has been shot and killed. Garth's controlling press agent, Casey Jones, reminds him of the events of the past 24 hours.  The two of them asked Joshua Barnes, the stand-in, to take Garth's place at a movie premiere so Garth could get a long rest from the grueling production. Casey thinks that someone intended to kill Garth and he is not safe.  He devises a wild plan for Garth to impersonate Barnes until he can sort things out.  But on the first night in his new role Garth learns that the man he's pretending to be was mixed up with gambling gangsters, a songbird for whom he was a piano accompanist, and a married woman who was planning to bump off her husband with Barne's help.  Suddenly it looks as if Barnes was worse than no good -- he was rotten to the core and was probably the true victim of the gunsel who shot him. Garth is eager to discover the truth and sets out to play detective to his own murder.
Sale gets a lot of mileage out of the role playing business. There are lots of obvious jokes ("This was not in the script, was it, Casey?") and some farcical bits about Garth's disguise which requires him to dye his hair, sport a mustache stuck on with spirit gum, and wear dark glasses to cover his baby blues since Barnes had pale gray eyes. I also liked the classic scene where Garth attends his own funeral and overhears two writers discussing his acting talent. Make that a severe lack of acting talent - especially his mangling of script dialog, the actor's cardinal sin according to most writers. It's the best comic scene among many.
But it's the wacky multi-layered crime plot with everyone turning out to be a crook or a schemer that is Sale's real success here. I whipped through this book quickly and enjoyed every word.  If you're looking for  a good example of the pulpy fun and a send-up of the olden days of the Hollywood studio system look no further than Benefit Performance.  For once I'm reviewing a book that's easy to find in multiple editions.  The second illustration is of the most common edition - the Dell mapback - and there are many copies for sale from online dealers. It might even turn up in your local library.
This book qualifies for another few inches of successfully attained ascent in my 2012 Mount TBR Reading Challenge. Two down and thirty-eight more to go. No altitude sickness yet. I'm crossing my fingers.
Posted by J F Norris at 1:00 AM