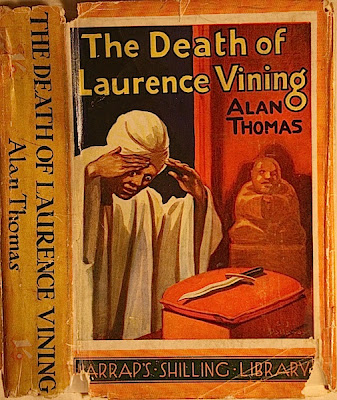 What a lucky find this was! I went into one of my favorite used bookstores looking for two Ed McBain books which I knew I would find. Before leaving I skimmed the shelves for odd hardbacks with DJs like I always do hoping some treasure will magically appear and I saw the spine of a book way up on a top shelf and I could only read VINING. "Is that what I think it is?" I mumbled to myself. I had to grab a stepladder, climb up, and pull it off the shelf. Lo and behold! The Death of Laurence Vining (1928) -- an impossible crime novel I've been on the hunt for years. And when I opened the cover to check the price and saw it was under $10 I had to buy it. I was in the midst of finishing a book for the Vintage Mystery Reading Challenge but I set it aside so I could finally read this incredibly hard to find book, let alone one with a dust jacket. (That's the tattered DJ over to the left - I take what I can get these days, especially for $9.25) I was pleasantly surprised that this book turned out to live up to its reputation as a minor classic with a very original spin on the detective novel and an ingeniously thought out impossible crime.

Laurence Vining is an arrogant, supercilious wanna-be criminologist who dabbles in solving crimes with the aid of his sidekick Dr. Benjamin Willing (no relation to psychiatrist Basil, BTW). After recently receiving more accolades from local newspapers for his capture of the killer in the notorious "Shop Murder" he returns home to find a letter from someone signing herself "Red Hat" who desperately needs his help. The letter instructs Vining to meet her in the Hyde Park tube station the following day at 3:25 PM and seek her out near the elevators. She'll be wearing a red hat, of course. Vining asks Dr Willing if he wants to join him, but Willing declines. That afternoon Vining is discovered stabbed, a ceremonial Malaysian dagger sticking out of his back, after descending alone in the elevator at Hyde Park station. There were only two people present at the time and both were on the platform to witness Vining falling out of the elevator. No one was inside the elevator and no one was on the upper level from where he descended. How was it done?


I was expecting that Dr. Wiling would take over as the main sleuth having always lived int he shadow of Laurence Vining. But it is the shrewd and intolerant Inspector Widgeon who takes charge of the case and will solve the complicated murder.  Widgeon suffers no fools gladly often rudely interrupting long-winded suspects and urging them to get to their point quickly.

Soon after the discovery of Vining's murdered body his nephew Jack who was longing to marry Vining's secretary vanishes. Also the trusted Malayan servant Suleiman flees the household when he learns that the weapon used to dispatch Vining was the very same rare artifact of religious importance that was stolen from a locked cabinet in Vining's study.  Widgeon has two teams of policemen searching for both missing men while he continues to interrogate Vining's servants and the tube station employees looking for some motive for the bizarre crime. In the process he uncovers some strange sexual relationships among the suspects, an adulterous affair, Vinings' intent to disinherit Jack, and an outlandish secret involving Jack's true parentage that rivals anything in a Dickens novel.

The whole book is something of a send-up of the traditional detective novel. The amateur sleuth is the victim, the sidekick disappears into the background becoming almost invisible, the policeman sleuth is brusque and far from gentlemanly, and several of the suspects are presented as burlesques of the stereotypes found in the genre. While there is a trace of comedy here the book is not intended as a parody. The complexity of the plot, the singularity of the murder method, and the motive are all deadly serious at heart.Most impressive to me was discovering how meticulous the murder was planned. Not only was the deed itself thought out to the last detail, but all variations of the "impossibility" being ruined by unexpected tube passengers, ill timing of the elevators, absence of the lift man who opens the elevator doors, etc. were all taken into consideration so that the actual murder would only take place in the presence of two specific witnesses and no one else. If anything occurred to prevent this from happening the plan would be abandoned.  It's truly a bravura performance on the part of Thomas. 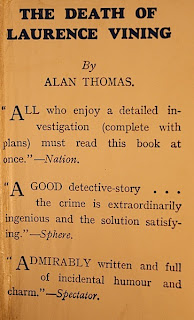 This is the third book in the Perilous Policemen portion of my adventure in the Vintage Mystery Reading Challenge. Below are the other titles I have read so far in which the primary investigator is a policeman. Five more will follow and then I'll move on to Part Two of my three part challenge.

Part I. Perilous Policemen
The Case of the Beautiful Body - Jonathan Craig
Murder by the Clock - Rufus King
Posted by J F Norris at 1:00 AM