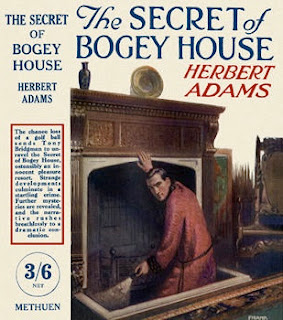 Herbert Adams' first mystery novel is typical of the kind of crime fiction that was in ample supply in the early 1920s – a blend of the detective novel and the action thriller. This is the first appearance of Adam's lawyer detective Jimmie Haswell, but here he has a relatively minor role. Instead it is Tony Bridgman, a professional golfer and Haswell's buddy, who is our intrepid sleuthing hero. Interestingly enough The Secret of Bogey House (1924) begins with the search for a lost golf ball.

Golf will play a prominent role in Adam's later detective novels (sample these titles: The Body in the Bunker, The Golf House Mystery, Death off the Fairway, The Nineteenth Hole Mystery). It is usually the one thing that Adams is remembered for in his contributions to the genre. Both Jimmie Haswell and Adams' later detective Roger Bennion are avid golfers. The game is almost always present in some way in the majority of his mystery novels and in some cases takes center stage. Here golf serves only as atmosphere in a tale of a murdered man found dead in a sportsman's private hotel.

While hunting for a treasured golf ball in Mr. Teesdale's backyard Tony Bridgman is invited inside and quickly charms the old man and his young ward, Molly. Upon learning that Tony is the famous golfer Teesdale entrusts him with the task of discovering what happened to his nephew, David Gregson. The nephew recently asked for a loan of £2000 from his uncle but did not mention why he needed it so urgently. He then left with the money and has been not heard from since. Last word Teesdale had was that David had been staying at a private hotel for sportsmen run by James Mitchell. Entry to the hotel is by Mitchell's personal invitation and Teesdale hopes that Tony will be able to charm his way using his celebrity as a golfer as added incentive. Once inside he is sure Tony can learn what happened to David Gregson.

Tony finagles an invitation and sets up his investigation using Jimmie Haswell as an outside resource. Gregson does eventually return to the hotel but that very night is found stabbed (in the eye!) in a secluded area on the hotel grounds leading to a boathouse. No sign of a weapon but Tony is the only one at the scene of the crime making him suspect number one.

The story has some standard examination of physical evidence for a few chapters, but the mysterious activities of a Polish count, his reticent daughter who seems to be hiding a secret, and the sinister Mitchell overtake the story displacing any hopes for a legitimate novel of detection. Tony spends a lot of his time making midnight trips to the boathouse, eavesdropping behind curtains, risking his life swimming around the boathouse, and eventually finds a secret passageway (not so secret thanks to the first edition dust wrapper illustration) leading to an underground cave filled with smuggled antiques. A side trip to Belgium, a shifty antique dealer and his thuggish sons also feature in the fast paced story. All the while Tony is wooing Molly and trying his best to impress upon her that he is not just a dumb jock with a great tee shot.

For someone like me who usually dislikes the "starry-eyed-young-lovers-mixed-up-with-sinister-criminals" plot I was taken aback by how much I enjoyed this. Adams writes a ripping yarn and has a deft touch in creating a likeable hero and heroine, not the usual sappy love birds. His obvious romantic streak is prevalent in all his books. I think in addition to golf Adams is deserving of mention for being perhaps the preeminent detective novel writer who knew why and how to incorporate love and romance into a story about murder.

Making a nice segue into this plug:  Stay tuned for the "Neglected Detective" series, a soon-to-be regular feature on this blog that will discuss at length forgotten amateur sleuths from the Golden Age of Detective Fiction.  First up:  Jimmie Haswell who, when he takes the lead role, will turn out to be quite a sharp-witted young man.
Posted by J F Norris at 11:31 AM