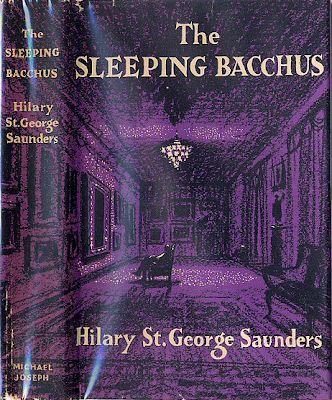 Here's a book that has a unique history. It started as a French mystery called Le Repos Bacchus (1938) written by Pierre Boileau (whose collaborations with Thomas Narcejac I have reviewed here, here and here). Saunders, who wrote as "Francis Beeding" with his own collaborator John Palmer, came across the book in a Parisian bookshop and thought it remarkable after reading it. He had hoped to write his own version, but Palmer died in 1944 before the two could collaborate. Still Saunders managed to get permission from Boileau and wrote the book on his own. This led to the publication in English of The Sleeping Bacchus in 1951. I know nothing of the original French version, but according to the brief history on the DJ blurb Saunders felt that the story was slightly outdated and had to update it. I am assuming that the updating had to do with World War Two since many of the characters are either veterans or deserters of that war and it does play a minor part in the proceedings. This is the only case I have encountered where one mystery writer's book inspired a rewritten and updated version of the story by another mystery writer from a different country. In movies we find this kind of thing happening frequently: Japanese, Thai and Korean horror movies remade in the US by the dozens for example. And most recently the US movie versions of the Stieg Larsson books already successful in their original Swedish. I'm curious if there are other instances of rewritten stories in the book world.

Saunders' book is - like Boileau's - the story of an art theft and an apparently impossible art theft at that. the book presents three "miracle problems" with varying degrees of complexity. The large painting of the title was removed from a locked room under guard. While the thief bungled his escape and was captured the painting could not be found anywhere. Later in the book another thief shows up to retrieve the painting and seems to have climbed over an unscalable wall in a matter of seconds while being fired at by his gun toting pursuers. Finally, a third impossibility occurs when a Black Maria vanishes from a road in full view of several witnesses. There is no sign of the prisoner inside and neither the driver nor the policeman guarding the prisoner can be found. While the later two impossible problems are less than thrilling and easily solved, the theft of the painting and where it ended up is one of those stunning pieces of misdirection worthy of the master himself - John Dickson Carr. The book itself begins as a detective novel but transforms into a cinematic action thriller. It would be a perfect candidate for a movie these days with a large number of car and foot chases, lots of gunplay, several kidnappings, and a cast of witty and intelligent characters. A scene in which our hero John Marriott is tied to a fence while he watches the second thief take flight over the moors towards the "unclimbable" fence and his rescue by a negligee clad, pistol-packing mama is one of the best in the book. She uses Marriott's shoulder to steady her aim and she fires three shots at the fleeing culprit nearly deafening him in the process but nonetheless leaving an impression of her crack marksmanship.

At one time a rather scarce book copies of The Sleeping Bacchus are now easily obtainable. My quick online search turned up several for sale with the intriguing 1st edition dust jacket shown above. As an example of an impossible crime novel without a murder The Sleeping Bacchus is unique in the genre. And it certainly can hold its own against anything by Carr, Halter or any of the other practitioners of the impossible crime mystery.
Posted by J F Norris at 6:00 AM