THE STORY: Mrs. Weir needs a companion to keep her out of harm's way.  The woman seems to be suffering from early senility -- drifting into her past memories, calling people by the wrong names -- and needs careful watching. But her newly hired caretaker is unable to prevent Mrs. Weir's death by arsenic poisoning.  Inspector Dan Pardoe investigates uncovering a household rife with greedy relatives and secretive employees. Complicating the overall investigation is the shadow of a previous crime still haunting the family. Mr. Weir has recently been acquitted of the murder of his sister-in-law, also poisoned. Is he in fact guilty of that crime and still on an arsenical rampage?

THE CHARACTERS:  Shadows Before (1939), Dorothy Bowers' second detective novel, is quite a complicated story. We think at first that the story will focus on Aurelia Brett, the newly employed caretaker who was to prevent Mrs. Weir from doing herself harm and to perhaps also prevent anyone else from doing her harm. The entire first section "Coming Events" deals almost exclusively with Aurelia, her job interview, her new career plans and her settling into the Weir household. We get to know everyone through her point of view. When Mrs. Weir dies Inspector Pardoe enters the picture and the pint of view shifts entirely. The lives of the Weir family are revealed, several motives and opportunities are uncovered. Aurelia, who was drugged the night of the murder to keep her away from Mrs. Weir, almost disappears into the background. It's an odd shift in narrative and point of view, but not one without a purpose.

Aurelia is hired mostly as an adult babysitter rather than a nurse. Mrs. Weir has a habit of taking long walks and gathering wild plants for an "herbal tea" she enjoys making.  In her muddled state of mind the Weir household are fearful she may pick some wrong plant and poison herself. She has already had a few bouts of illness that may have been caused by her tea. And so Aurelia becomes Mrs. Weir's constant companion, keeping a watch on her and her plant gathering/tea making rituals.

Religious zealot and imperious housekeeper Mrs. Kingdom accuses the recently Alice Gretton, tenant in a cottage near the Weir home, of causing Mrs. Weir to become ill.  Every time she visited Alice Mrs. Weir's health would deteriorate within a day or so. Because Mrs. Kingdom also espouses a vehement fundamental Christian worldview her ranting is dismissed; no one takes any of her warnings seriously. Alice has mysteriously vanished without a word to anyone other than placing a sign on her home "No Milk" to cancel deliveries from the milkman. Mrs. Kingdom is certain that Alice was a malicious woman, inveigling her way into Mrs. Weir's affections and trying to wheedle her way into the will in order to rob the family of the Weir fortune. The murder investigation and the disappearance of Alice will later intersect in one of the novel's most ingenious plot turns.

The other suspects include Mr. Weir's nephew Nick Terris, an Oxford student who rather enjoys pontificating on the subject of euthanasia; Augustus Weir, the widower's brother, an affected poet who runs a literary magazine in dire need of a financial boost; William Mond, a sinister butler guarding several secrets;  Miss Leith, an actress and friend of Matthew Weir; and Andrew Pitt, another Oxford student and friend of Nick's, invited to the Weir home for the Easter holiday and whose presence puts a few people on edge.

Adding to the fun of this intricately plotted tale are additional mysteries uncovered during the investigation like the previously mentioned disappearance of Alice Gretton.  We also must contend with the whereabouts of someone named Fenella Pagan, an actress last known to have been living in Australia; a group of gypsies living near the Weir home; and the reason for automotive sabotage that results in a near fatal car crash.

I liked the interaction between the two primary policemen though there are some other interesting bits with very minor cop characters, too. Pardoe is assisted by Sgt. Salt, a younger and insightful detective whose unconventional theories and deductions provide clarity for Pardoe's more reasonable ideas about the case. They make a good contrast of two generational styles police work -- the often brash, quick to judge, youthful learner and the calmer, more rational, seasoned veteran.

INNOVATIONS:  By the time I had reached the penultimate chapter I marveled at one aspect of this novel more than any other. Some standard detective novel conventions are put to good use here: excellent misdirection that actually fooled me coupled with the labyrinthine use of multiple identities and masquerade. Most readers will catch on quickly that some of the characters aren't who they say they are, especially when you read one letter in the  final epistolary chapter of the first section. But the sheer number of aliases in this book rivals anything in the Victorian sensation novels I love so much in which beggars turn out to be policemen and actors are unmasked as private detectives and servants are revealed to be escaped convicts and what all else. Bowers shows some real hutzpah in this book. She manages to lead us down the garden path leading our attention to what she wants us to see as we overlook what should have been clear from the onset.  I simultaneously was admiring her and shaking my head at the overkill.

QUOTES:  These talks with Salt always served Pardoe as an admirable clearing-house for ideas that too often seemed at their most confusing before light broke. All the better if Salt, as was frequently the case, propounded a conflicting theory. The clash of inference acted as a stimulus on the Inspector, who had more than once pounced upon a truth hidden from both until they had found themselves in opposing camps.

THINGS  I LEARNED:  The V.A.D. is mentioned in passing to explain why one of the women characters is so savvy about poisons.  (I forgot to write down which woman.)  As many well read detective fiction fans know this is the Voluntary Aid Detachment, organized by the Red Cross in England to help civilians, mostly women, become part of the war effort. Volunteers in the V.A.D. worked alongside military nurses and physicians. The V.A.D. is the same outfit that Dame Agatha joined as a young woman during World War I. Similar to the character in Shadows Before Christie's experiences there helped her gain her vast knowledge of poisons and toxicity of abused medications.

Dog in the manger turned up again!  But it seems to have been inappropriately used in this context:  "Andy's a guest here, and I know he didn't want to be dog-in-the manger and squash Freddy..." Nick Terris is the one speaks that line. Maybe this was supposed to indicate his poseur university student persona.  I can't imagine that Bowers, who is an intelligent and informed writer, would have misused it by accident.

THE AUTHOR: Dorothy Bowers (1902-1948) and her work have been been discussed at length all over the blogosphere. No real need for me to go in to any great detail on this blog. A lovely capsule of her life can be found here at the Moonstone Press website. Everyone concedes that had Bowers lived longer she would have been quite a contender for some of her contemporaries in the world of mystery fiction.  Robbed of life by the ravages of tuberculosis Bowers died before she reached the age of 50.  Her five detective novels did get her noticed by the crime fiction world and she was about to be inducted into the Detection Club just prior to her death. 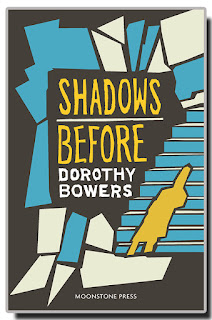 EASY TO FIND?  Huzzah! This one is available in multiple editions, one of them brand new from last year.  All of Dorothy Bowers' mystery novels have been reprinted in handsome editions by Moonstone Press, the same wonderful publisher who brought us The Perfect Alibi by Christopher St. John Sprigg along with three other of his detective novels. Additionally, all of the Rue Morgue Press reprint editions of Bowers' five books are still out there in abundance in the used book market.  So take your pick brand spanking new or barely old from the early 2000s. For those with more cash to spare and who want the real thing, as it were, you can dig a little deeper by using Hodder & Stoughton in yuor search terms and turn up a handful of vintage UK copies, albeit reprints rather than first editions. There are sadly no copies for sale online of the US Doubleday Crime Club edition though I have provided the very cool dust jacket with the skull illustration courtesy of Mark Terry's Facsimile Dust Jackets website.

Previously reviewed on this blog are two other equally well plotted and entertaining Bowers mystery novels: Fear for Miss Betony and A Deed without a Name.
Posted by J F Norris at 12:15 PM