IN BRIEF: A Deed Without a Name - Dorothy Bowers 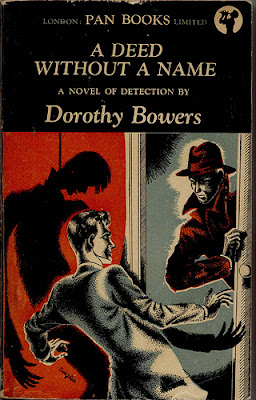 Three suspicious attempts made on Archy Mitfold's life in the past weeks make his sudden suicide by hanging appear less than genuine in the opening chapters of A Deed without a Name (1940), Dorothy Bowers' third detective novel. Keen detective work on the part of Inspector Pardoe and his team of smart policemen reveal that Archy was murdered. He was found in a darkened room with blackout curtains drawn. No suicide kills himself by hanging in a darkened room. It's awkward just trying to get the noose done right to start with, one of the coppers mentions. Plus, the overturned stool he was supposed to have used to climb up to the hanging rope showed no signs of the gunk and dirt on the soles of Archy's shoes. A not so clever killer is at work here.

The dying clue is usually the kind of gimmick we find in the works of Ellery Queen and other American mystery writers. Rarely do we get an example in British detective fiction, but there is a rather puzzling and recurring one in A Deed Without a Name. Archy had a habit of drawing a speckled bird and an envelope with numerous doodles of the strange bird is found in his home by an extremely helpful maid. It’s a clue that only the most diligent of readers will be able to figure out or a reader who happens to be the world's foremost ornithologist with a special interest in scarce birds of the British Isles. It's a puzzler indeed but not exactly the fairest clue of all in this well clued mystery with more than an ample amount of expert detection.

Simultaneous with the murder probe is the search for the missing millionaire Sampson Vick, a philanthropic businessman who vanished without a trace only a few weeks before Archy's death. With the help of some extremely knowledgeable servants (Vera, a maid, is a perfectly executed servant character and a highlight) and a few gossipy neighbors Pardoe and crew learn that Archy had recently become privy to some news that transformed him into a giddy young man and possible made him a danger to the murderer. A visit to a movie house apparently seemed to be the turning point in his personality shift. Pardoe and his sergeant find themselves visiting the movie houses of the neighborhood trying to determine exactly what Archy saw that made him the target of three murder attempts culminating in the fatal fourth. When during one of his movie theater visits Pardoe chances upon a newsreel featuring Vick he begins to imagine that the hanging murder and the millionaire's vanishing might be linked. 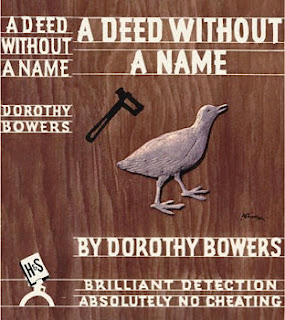 This is one of the most densely plotted books I've read in a long time. Bowers packs an awful lot into her story: the enigmatic bird drawings, Archy's teasing comments about his bit of news he learned, and a seemingly extraneous tale about Vick's gangster brother Humphrey that will eventually figure importantly in plot. The novel holds the reader's interest with cleverly detailed police interviews, a perfect balance between character and atmosphere portions, and adroitly placed surprise sequences that keep the pages turning and the wheels of the reader's brain spinning.
Posted by J F Norris at 1:13 AM