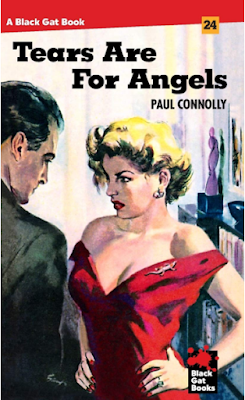 Flashbacks. I like a little time travel in my crime fiction. You get it a lot in mystery fiction, whether it’s a simple telling of a client’s reason for hiring a private eye, or the apparently guilty heir coolly going over his actions the night his wealthy uncle was bashed on the head with a silver plated candlestick. It’s nearly inescapable in the conventional formula of the Q&A style of “Where were you on the night of…?” you get in everything from English manor whodunnits to hard-edged police procedurals to melodramatic courtroom battles. But rarely are flashback techniques used with such stunning effect as in Tears Are for Angels (originally published 1952) the final crime novel Tom Wicker wrote as “Paul Connolly” before he decided to use his own name on his work.

Here's the bare bones story:  The murderous result of a jealous husband’s rage, his insane method of covering up the murder as a suicide, the bizarre self-mutilation done to bolster his claim of self-defense which later leads to amputation and disfigurement, and the subsequent amateur investigation of his wife’s previously unknown friend trying to get at the truth of that violent death.

Wicker uses multiple viewpoints in his detailed flashbacks as both narrative experiment and to create suspense in a story of duplicity, mistrust and hidden desires. There is an element of the unreliable narrator in the storytelling that always leaves the reader questioning which story he should believe. Is anyone telling the truth? Much as we get a tortured confession from Harry London at the outset is he just making it all up? And is Jean, his wife’s supposed good friend from the Big City, to be trusted with her story? Is she too creating a story of her relationship they had as a sympathetic diner customer looking after a lost and needy waitress?

On the surface this novel may seem nothing more than a tawdry tale of revenge, but there is more to this sex and violence tale than a retread of another familiar getting even story. Surprisingly, for a tale that ostensibly seems to be about crime and revenge Tears Are for Angels turns out to be a novel of love and forgiveness, for redemption and rebirth. Wicker has his protagonist come to this eyebrow raising realization:

I had never really loved Lucy [his wife]. What I had thought was love was only conceit, because she had been my property, because I had made her my property.

...now I know what love is, I thought. Now I know. It's what I feel for this woman who lies naked and sleeping beside me. It's something I never knew existed in this world or any other. It's what you feel when you are able to do anything and suffer anything and endure anything and give anything, any time, anywhere, for someone else. Or at least it is for me. That's what love is for me.


A more lusty and transformative love has rarely been depicted so intensely or unexpectedly as in this compact novel. For all its action oriented scenes, for all the desire captured in passionate and desperate moments this final work as "Paul Connolly" is one of Wicker's most mature works. We still get a shocking climax in which one final plot twist is delivered with a hefty punch, but the ending of what might have been a deeply disturbing noir tale delivers not only redemption for Harry, but for the memory of his dead wife. More importantly, Tears Are for Angels promises a glimmer of light for our two protagonists after a descent into the abyss. This was the book Tom Wicker needed to write in order to pave the way for his later, even richer novels like The Devil Must (1957) which were published under his own name.  here is a minor classic, in my opinion, and one of the few paperback originals that absolutely deserves this new reprint from Black Gat/Stark House.