FFB: The Devil Must - Tom Wicker

THE STORY: The murder of a farmer appears to be the work of a disgruntled hired hand who happens to be Black. Reporter Sandy Martin and his editor Al Harris are given the privilege to review the crime scene by Sheriff Tyree Long. They are asked to handle the news story with discretion as this is an election year and Long wants to avoid unnecessary racial disputes. When the suspect is arrested and thrown in jail he begins to exhibit unusual trance-like behaviors, becomes withdrawn and nearly catatonic. Another Black man in a nearby cell tells Sandy that old Jumbo is hexed. And the murder starts to take on a sinister aspect when Sandy hears stories of witchcraft, spell casting and the power exerted over the superstitious denizens in the Black community.

THE CHARACTERS: The Devil Must (1957) contains a huge cast encompassing nearly every single person in the small North Carolina town of Marion. We follow the actions and thoughts of protagonist Sandy Martin, a cub reporter who hasn’t left his hometown since birth. He is disgruntled with his broken family: a devil-may-care brother has left the state to make a name for himself up North, his sister who he still loves dearly has fled the town, supposedly living with a man she chased. He’s not heard from her since she left town years ago. Sandy is carrying the torch for his high school sweetheart, now working as everyone’s favorite waitress in a whites joint aptly named Purity Café. Not too surprisingly given her name is Honey she has a reputation for being flirtatious and indiscreet with her affections. This family baggage and frustrated romance help to color the way Sandy views his boss, Al, and the rest of the people he comes in contact with. His many grudges, hidden prejudices and misperceptions of characters will be put to the test when he must willingly accept that the motivations of the murderer seem to be grounded in superstition and an insidious use of mind control in the form of actual witchcraft and hexes.

Marion is riddled with Southern prejudice against Negroes. The 1950s PC term and the ugly slur are used with equal frequency by all characters. Those who use Negro we know are supposedly the good guys, those who throw around the other N word are the baddies. Or so it seems.

The Sheriff wants the case of Carl Roger’s bludgeoning murder wrapped up quickly and is eager to fit evidence to the primary suspect poor, weak minded, and barely literate Jumbo James who protests his innocence until he can literally not speak a word and curls up into an immovable ball on his jail cell cot. Sandy openly listens to Nathaniel, Jumbo’s much older brother, relate horrific stories of how Mrs. Rogers, the real town tramp, has been caught having sex in public places and then threatened Nathaniel with her weird powers. He tells a bizarre tale of how she performed a frightening ritual involving fire and convinced Nathaniel that he was in her power. It is this unnervingly effective story that gives Sandy the idea that deeply held superstitious beliefs are as profound as deeply held religious faith. That the capacity for profound faith in either belief system can subvert common sense. That one human being literally can be in the hands of another who is savvy enough and perverse enough to exploit the talent of sympathetic understanding into tyranny of the mind.

Ironically, it is John the Baptist Jones, the incarcerated minister arrested on suspicion of raping one of his own parishioners, who explains to Sandy the importance of the belief in hexing and its dire effects on his community. There are many cultural lessons Sandy learns from people like Nathaniel and John the Baptist. Once he has in his hands a piece of surprise evidence in the form of a letter written by the murder victim and sent to a respected lawyer Sandy begins to formulate a plan that will redeem Jumbo, save the town of Marion from further harm, and deal with the true killer in a satisfyingly retributive manner. 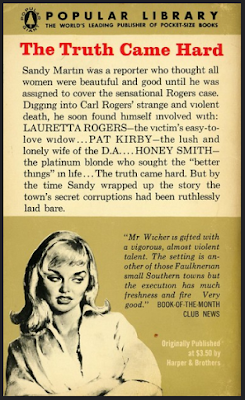 INNOVATIONS: The Devil Must explores race relations in the dawn of the civil rights movement by examining superstition and its powerful effect on the Black community of the American South. Wicker has managed to use the exploitation of superstition in order to explore the prejudice and subjugation. He does so with an incisive, angry intelligent prose. The climax of the novel becomes nearly allegorical with the villain of the story serving as a symbol of all the iniquitous treatment of not just Black people, but everyone ignorant and foolish enough to give themselves over to hollow cant and vicious threats. After a story that at times seems to drown in Sandy’s romantic entanglements, his personal prejudices against all those he sees as threats to his pure love for Honey (all of this clearly meant to mirror the superstition of Jumbo and Nathaniel) the novel pays off big time with its true message of the treacherous nature of empty belief systems that have no foundation in genuine truth. And yet that truly terrifying finale is evidence to all the characters (and the reader) that witchcraft can be a real and useful tool for those immersed so deeply in its rituals and curses as to bring about healing change. The novel ends in an authentic conflagration in which fire purifies and allows for a phoenix-like rebirth for those lucky enough to survive.

QUOTES: Mrs. Rogers was not pretty; she was too dark and too hard and too worn out. But that night hate brought her close to beauty. Hate flashed in her eyes and stiffened her figure. She stood straight, seeming taller and slimmer than she was: and I was glad it wasn’t me that she hated.

…he clapped his hat on his head and, as if it were a crown, it made him the old Tyree Long, the powerful politician who shaped Jasper County with his shrewd plump hands.

I thought about Carl Rogers. I couldn’t place him out of all the milling half-glimpsed Saturday gallery of farmers’ faces. But he had been a human being; and where now was all that laughter and all that sorrow and all that hope that ought to have filled his life—anybody’s life? It seemed there ought to have been at least a trumpet blowing to mark the passage of so much humanity.

A Southerner – that is, a man who lives in what used to be the Confederate States of America – has to condone segregation of the races. He has no choice. It doesn’t matter what he believes; it doesn’t even matter if he is a learned man to whom people listen or pretend to listen, what he says on the radio or writes in the newspaper. Every day of his life in the South he gives tacit approval to segregation. He does this when he eats in a restaurant. He does it when he attends a motion picture or travels by public conveyance or stops at a hotel or motel or sits in a doctor’s waiting room or joins a civic club or sends his children to school.

Al Harris, the editor of the town newspaper, to Sandy: "You and Street [a lawyer] are doing just what you claim Tyree did, building up something that could have happened into something that did happen. I have always thought that it was just as bad to be blind in one eye as in the other."

Flanking the French doors was a pair of oil paintings of some earlier Kirby men, statesmen or educators or wielders of vast private influence, such as Kirbys had always been. … That room stood for order, for permanence, for security. It spoke for men of property and pride and it sheltered their affairs. It would brook no new light under its gloomy ceiling. … And, in its own way, its spell was as profound as that of any witch. It’s grip on the minds of those who lingered here would be as unshakable.

Nathaniel blinked, secretively, wisely, suddenly he seemed old and profound and powerful. Sitting there …amid his poverty, and in his ignorance, he still knew more than either of us; a party to dark deeds we feared to credit he dwarfed our rational assurance with his secrets.

THE AUTHOR: Tom Wicker (1926-2011) was one of the nation’s leading sociologically observant reporters for much of the later 20th century. He first made name for himself writing up his eyewitness account of John F. Kennedy’s assassination. He wrote an Edgar award-winning nonfiction book about the Attica prison riot. He was involved in a lifelong quest to speak up for the maligned and ostracized portions of American society, and was hugely involved in the civil rights and equal rights movements of the late 60s and early 70s. In addition to several non-fiction works Wicker penned a handful of pulp thrillers as equally affecting as The Devil Must. These were all published under the pseudonym Paul Connolly. I’ll be reviewing one of those books, reissued by Stark House this month, in a few days. Wicker’s fascinating and important life as journalist, novelist, analyst and activist is captured in his laudatory obituary available for all to read (without subscription!) on the New York Times website.
Posted by J F Norris at 11:50 AM