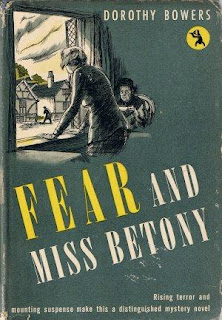 Emma Betony, former schoolteacher, is contacted by an ex-pupil, Grace Aram who is now the headmistress of a girl's school housed in an old nursing home. Although most of the elderly patients were removed when the building converted to a school , two of the occupants of the nursing home are still residents and one of them is suspected by Grace to be the victim of a murderous plot. She asks Miss Betony to accept a teaching position at the school and use her free time to help Grace sort out the dastardly doings at the school. The memory of Miss Betony's Aunt Mary hovers over the story teasing the reader.

Bowers is one of the few 1940s era practitioners of the fair play detective novel who might have become the only real competition for Agatha Christie. She certainly wrote a lot of books about poison murders. I would guess she must have some medical knowledge based on the way her nurse and doctor characters speak about disease and drugs.

The book is literate and cleverly plotted with one of the best uses of misdirection in a detective novel of this era. I wouldn't call the book "ingenious" (as Tom & Enid Schantz do in their introduction to the Rue Morgue Press paperback reprint) since the device is something Christie herself employed repeatedly in the 1930s. Bowers wrote her book in 1940. Nevertheless Bowers nearly fooled me. 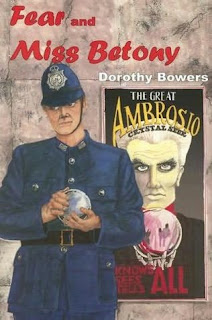 There are some genuine surprises here, all of the characters are very well drawn, suspicion darts between a handful of them. There is a fortune teller who dabbles in black magic featured in the plot and those scenes are some of the best in the book. The puzzles and mysteries surrounding the odd goings on at the school-cum-nursing-home never fail to keep the reader involved and intrigued. The book really is fascinatingly well written, engaging from page one to the last word. Bowers' policeman detective Chief Inspector Dan Pardoe turns up in the final three chapters.

NOTE:  The UK edition's original title is Fear for Miss Betony. The change in title for this US edition seems completely unnecessary to me. But I guess Americans don't often use the imperative mood for the verb "fear" which is how the title is meant to be read, and not as if someone were handing Miss Betony a plate of fear, so to speak. The Rue Morgue Press edition is the most easily found and in some cases can be purchased for under $9 if you are an assiduous book hunter.
Posted by J F Norris at 7:00 AM