THE STORY: Cruel and vicious Antony Mullins who promised misery upon his wife and her various lovers is found dead in his blazing garage. At first thought to be a strange suicide or an accident it is soon discovered that he was shot in the back of the head. Mullins was a very rich man and some surprising legatees named in his will arouse suspicion by both police and those who expected to be named in the will. Yet the three most likely suspects all have iron-clad alibis. When the police are stymied unable to break what appears to be The Perfect Alibi (1934) Sandy Delfinage and her friend painter Francis Filson turn amateur sleuth to ferret out a very clever murderer.

THE CHARACTERS: In this fairly large cast every character is superbly drawn, lively and quirky, most with wry sense of humor. Here are the people who stand out:

Patricia Mullins - Anthony's widow who seemed to have a long line of admirers and may have been involved romantically with more than one of them.

Ralph Holliday - Antony's nephew who has travelled to Berlin on a business trip and has not been heard of since.

Francis Filson - a portrait painter who doesn't do much painting.  He takes two days to sketch Pat and the painting has not even been started before Mullins turns up dead.  Mullins believes Filson and his wife were having an affair and that that the portrait will never materialize.

Dr. Eustace Marabout - oddball physician who studies occult and supernatural lore then actually begins to believe in the existence of vampires, demons and werewolves citing examples he has met in his life.

Mrs. Murples - runs a boarding house for athletes and trains boxers. She's foul-mouthed, tough and strangely very likeable. I loved the scenes in which she appeared.

Sandy Delfinage - in charge of the stables at the Mullins estate. She's an able equestrian and the most sharp witted person in the book.  Not too trusting of Mrs. Mullins. Has her eye on Frank, and not just as a possible suspect. Is certain that the murderer is...

Dr. James Constant - a major legatee named in Mullin's will. His Society for Scientific Research receives a sizeable bequest leading Sandy to suspect him of killing Mullins for the money. His odd habit of wearing a fake beard is not just a trademark of his vanity as the police try to convince Sandy. She, instead, finds it both ridiculous and sinister.

Constable Lawrence Sadler - young police officer whose keen intelligence and athleticism draw attention of Scotland Yard.  He is instrumental in tracking down Mrs. Mullins in the climax which leads him from England to France to Spain and rescuing her from a diabolical deathtrap.

A very minor character who has only a few scenes but was truly one of the best in the book is Vicomte de Grandlieu, a feisty aristocrat with a sense of romance and adventure. He is all too willing to help PC Sadler get to Catalonia with the aid of his private airplane. It helps that the Vicomte is an ace pilot who has racked up several record breaking solo flights all over the world.

Eventually Sprigg's series detectives Charles Venable, a crime writer, and Inspector Bray of Scotland Yard make an appearance. Though Sandy and Frank do much of the sleuthing in the book, Charles and Bray have the final say in solving the murder and explaining other various mysteries that crop up in the intricately plotted story.  But it may never have been solved without the imaginative thinking of Sandy Delfinage.

INNOVATIONS: The title is one of the cleverest parts of the book. The Perfect Alibi applies to four characters, one of whom probably never needed an alibi at all. It's something of a tour de force employing a detective novel convention that became the hallmark of writers like Freeman Wills Crofts, Milton Propper and Christopher Bush. Sprigg turns the whole notion of a perfect alibi on its head and does so with a sense of ironic humor when the solution is revealed. The book utilizes other crime fiction motifs as well like masquerade, cover-ups, frame-ups, manipulation of evidence, and multiple false and true confessions all of it done with originality and unusual spins on what are often tired conventions employed with little verve or imagination in the hands of other writers.

Early in the book it seems as if the novel will be an impossible crime murder complete with locked room. The local police attempt to write the strange death off as a suicide. But Inspector Trenton raises two points: "The door was locked.  We've searched the garage and haven't found the key. How could he get in without a key, or get rid of it once he had locked himself in? How could he shoot himself and then get rid of the revolver?"  While there is an element of impossibility to the murder and the fire that destroyed the garage and incinerated most of the corpse the locked room aspect is dismissed well before the halfway mark.

QUOTES:  Venables: "The case could have been solved on the facts known at the very outset of the investigation. Every fact and clue we needed was given to us. It was like the fairest possible detective story in the world, in which the reader is let into every material circumstance needed to enable him to guess the solution. And yet I couldn't guess it! It is something to be ashamed of." 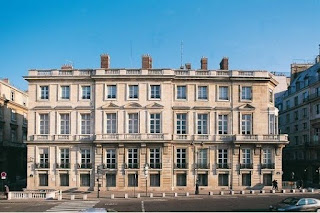 THINGS I LEARNED: One of the places where Mrs. Mullins hides out in the action-packed finale is the Hotel de Talleyrand in Paris. In the early 1930s it was still being used as a tourist and residential hotel. But my internet research revealed the hotel has rich history, most of it fairly recent. In the post-WW2 era the Hotel de Talleyrand was used by the US State Department in talks related to the Marshall Plan for European economic recovery. Owned by the wealthy Rothschild family for over 100 years it was eventually purchased from them in 1950 by the State Department and became the home of the US embassy in France. Later it was renamed the George C Marshall Center. In a nine year multimillion dollar project lasting from 2008-2017 largely financed by private donations the main rooms were restored and renovated to their original 17th century splendor. For more about the hotel and its transformation into a global seat of diplomatic discussions see this website. 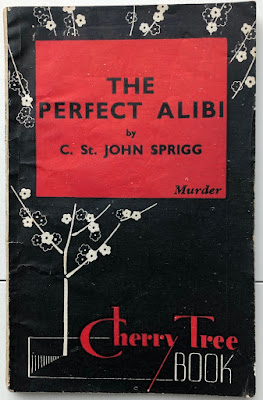 EDITION: Cherry Tree Books were published by Withy Grove Press, Ltd. They were the British equivalent of the ubiquitous US digest publications of years past. Similar to the practice of American digests the Cherry Tree Books were abridged versions of the original hardcover editions. Unlike the US equivalents, however, the books are not noted as being abridged. All of them were no more than 95 pages long and were typeset in an extremely small font size making it very hard on the eyes of even the most healthy and youthful reader. You're reading this blog in font around 11 pt. But the book is typeset like this in 8 Point. The books have ads all over the place, inside the covers, the back cover and even within the book, and all of them are for horrid food products like yeast extract and Bovril's meat powder which is supposed to be some sort of flavor enhancer. My copy of The Perfect Alibi also has an ad for Cadbury's Bourn-Vita, "the Protective Food", which turns out to be the UK equivalent of Ovaltine. It's a chocolate malt flavoring which explains why it's made by a chocolate manufacturer. But I'm not buying that it's a health food as it's being marketed in the ad in this book. They tried to do the same thing with Ovaltine in the USA.

This is the first Cherry Tree Book I've managed to finish. I abandoned others because of eyestrain; the font size is agonizing to deal with. But this book was too good to give up on so I endured the possible hazards of further ruining my already severely myopic vision and managed to survive relatively unscathed and without suffering any headaches. I'll be reading a few more of these Cherry Tree Book in the months to come because they tend to be the only edition I can buy of some extremely rare titles by mystery and crime fiction writers I've been wanting to read for many years now.

EASY TO FIND? Not at all, my friends. Ages ago the Doubleday Crime Club edition occasionally would turn up in the used book market usually at a rather high price, but I've not seen a copy for sale in almost 20 years. I was very lucky to find this Cherry Tree paperback about five or six years ago. I had no idea any of Sprigg's books were reprinted in paperback during his short life. Currently there are absolutely no copies of this book for sale from online dealers. Apparently an indie press was planning to reprint some of Sprigg's detective novels and had included The Perfect Alibi as a promised release. But to date they seem to have suspended all plans for future books. 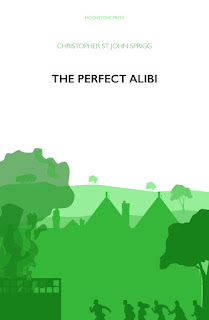 UPDATE, 7/31/19: TomCat's comment below is right on target. As of today, some of Sprigg's mystery novels are available from Moonstone Press, the indie outfit I alluded to in the paragraph above. The Perfect Alibi is one of four mystery and detective novels by Christopher St. John Sprigg that they have reprinted. The link to The Perfect Alibi will take you to Moonstone's ordering page for that title. I see that only 100 copies are available. I have no idea how many have been bought so far or if that count will be adjusted as new copies are purchased. Get yours now before all 100 copies are gone.
Posted by J F Norris at 1:35 PM