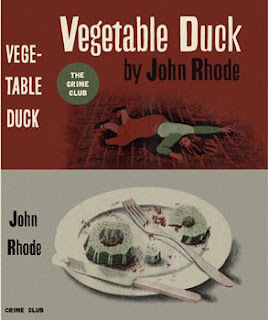 Around the middle of the 1940s Dr. Lancelot Priestley, John Rhode's professor of mathematics and sometime detective, became more of an armchair detective and less of an active participant in the intricately plotted crimes he encounters.  In these later books Priestley usually appears at the halfway point and serves as a consultant to the primary police detective. In the case of Vegetable Duck (1944) -- also published as Too Many Suspects in the US -- Priestley has only three scenes in which he makes subtle suggestions to Inspector Jimmy Waghorn. Priestley does one bit of dazzling detective work involving the mystery of an envelope with an inexplicable damp stain, but otherwise he merely entertains the police and forensic investigators at three different dinner parties and makes deprecatory remarks or frowns at Waghorn when he delivers his mostly wrong findings. But Waghorn is no dullard policeman, he picks up on Priestley's hints and finally gets it all right.

The book is almost an inverted detective novel. Waghorn does what so many real life policemen seem to do – they pick a primary suspect and become so obstinate in wanting that suspect to be guilty that they rearrange the evidence to fit the suspect conveniently overlooking things that "don't fit" rather than examining the true circumstances of the crime by including all of the evidence and using that to determine the proper criminal. On several occasions Priestley points out Waghorn's faulty reasoning and his fixation on one particular suspect who just happens to have a shady past.

There are multiple puzzles in this engrossing detective story. It's one of those rare detective novels in which the story is completely concerned with the solution of those puzzles with little filler action or the kind of local color usually found among the minor characters. The cast of characters is rather large as the story tends to shift locales frequently. Among the most interesting in the colorful supporting cast are Sir Oswald Horsham, the forensic expert; Frederick Massingham, a shifty private detective; Ellen, the garrulous cook and servant in the Fransham home; and P.C. Purbeck, a wily constable in the town where Charles Fransham relocates after his wife's death.

The murder investigation is primarily focused on the death by poisoning of Mrs. Fransham who dies while eating the vegetable duck of the original title. This is a dish of a large squash stuffed with mincemeat and vegetables. At first it is though that she somehow ingested food doctored with a prescription liniment for her arthritis that included two highly toxic ingredients. (I wondered what physician in his right mind would prescribe a medicine that seemed to be made up of nothing but poison, but this is dismissed by nearly everyone in the book. Strange.) The actual poison turns out to be the fairly innocuous digitalis, a heart medication which can be deadly in higher doses and fatal to someone without a heart condition. Savvy murder mystery readers will almost immediately pick up on the herbal origins of digitalis as I did and come to the conclusion that gardening and knowledge of plants will feature in the plot. In fact, one, of the characters is an avid horticulturalist and through him the reader learns all about raising vegetable marrows, specifically the unusual method a gardener employs to achieve super-sized marrows used for displays or to enter in gardening competitions. This method is exploited by the murderer in one of the many fiendish murder methods that are the hallmark of Rhode's books.

Waghorn's primary suspect is Mrs. Fransham's husband, Charles, who was involved in an accidental shooting that most people, including retired Superintendent Hanslet, believe was a disguised murder.  Hanslet provides Waghorn with the background of the shooting death revealing in the storytelling process the usual convoluted will in the plot. Money seems to be the central motive for the wife's death.  As the investigation unravels and becomes further complicated suspicion shifts to a little known son from Fransham's first marriage who had a less than loving relationship with his stepmother.  Waghorn refuses to heed Priestley's warnings of his rash behavior by jumping from suspect to suspect as he pieces the evidence against each man. Only in the final chapter does Waghorn see his folly and begin to pay attention to some apparently meaningless coincidences that turn out to be crucial to the correct solution.

Most of the book is deals with scientific experiments and discussion that reminded me of the best of R. Austin Freeman and J. J. Connington.  A trial and error experiment with test portions of the woman's final meal being injected into laboratory frogs recalled the elaborate camera experiment in The Sweepstakes Murder by Connington and a variety of esoteric scientific examinations by the brilliant Dr. John Thorndyke in Freeman's books.  But there is also an elaborate finale in which several characters are figuratively unmasked that made me think of some of the more outrageous denouements in Christie's work like Murder in Mesopotamia. There's a lot that will appeal to a wide variety of crime fiction readers in Vegetable Duck whether you like puzzles, scientific detection or endings that have an element of the surreal. 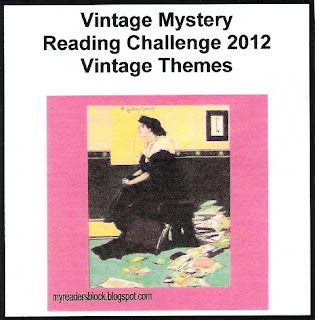 This completes the first part of my three part 2012 Vintage Mystery Reading Challenge sponsored by Bev at My Reader's Block. Links to the previously reviewed books are listed below.