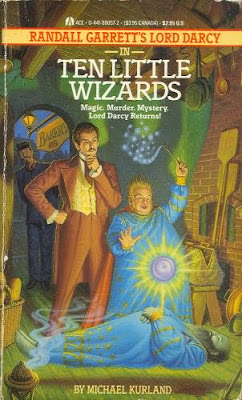 Impossible crimes and locked room murders. An Agatha Christie homage. An alternative universe where monarchies rule all of Europe and the New World. Magic supplants real science and sorcerers hold positions of power and authority. What more could you ask for? Well, a better constructed mystery, for one. And a lot less in-jokes and filler for another.

I was prepared to enjoy thoroughly Michael Kurland's continuation of the adventures of Lord Darcy, the Chief Investigator in the court of King John IV, a detective character first created by Randall Garrett in a series of novellas and one full-length novel back in the 1970s. Kurland does a nice job of elaborating on the alternative universe where Richard the Lion-Hearted ruled longer than his actual ten years preventing John I from ever being king and was succeeded by a long line of Plantagenet descendents who have been ruling the Angevin Empire for over seven centuries. But Kurland's skill in creating a viable detective novel that pays tribute to the impossible crimes and locked room mysteries Garrett concocted so imaginatively leaves a lot to be desired. Unfortunate because there are three locked room murders with so much promise yet none of them are solved with any ingenuity whatsoever.

Someone is murdering sorcerers and leaving behind slips of paper with taunting rhymed couplets. This and the title are a mere nod, barely an allusion, to Christie. I expected the rhymes to be a clue of some sort to the motives of the murderer or - as in the novel - be related to the murder methods.  But no, the rhymes have no reason. They do sound similar to the Christie poem but "Nine little wizards snickered at fate/One wizard laughed aloud and then there were eight" for example, has little do to with a throat cutting and has nothing to do with the eventual motive or identity of the killer.

One dead wizard is found stabbed in a bakery with all the doors and windows locked from the inside, another dead body is found in the middle of a freshly shellacked ballroom still tacky but showing only the victim's footprints leading into the locked room. The second crime is the most fascinating since the victim had his throat cut in such a way that it appeared someone had to be directly behind him and yet there is no evidence of any other person being present. There is a third locked room murder and two other deaths plus the threat of the assassination of His Majesty the King before the culprit is finally stopped. 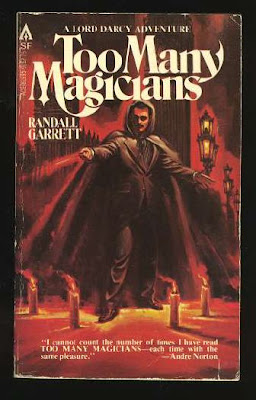 There is an awful lot that is similar to Too Many Magicians, the only Lord Darcy novel Garrett wrote. In Garrett's book a convention of sorcerers brings together wizards and magicians from all over Europe. In Kurland's book dignitaries from Poland travel to the court of King John IV for the ceremony which will raise Gwiliam, Duke of Lancaster (the King's younger son), to Prince of Gaul. Polish spies and political conspiracies are also prominently featured in both. There is a lot of backstory on the richly detailed alternate history of this universe and it was better delineated for me here. But the criminal investigation and the real mysteries tended to drift into the background while Kurland introduced more and more minor characters so that he could indulge in witty banter and discuss the political relations between Germany, Normandy, England and Poland and bring up even more talk about the colonies of New England and New France on the other side of the Atlantic.

One of the more original spins in the book is Kurland's poking fun at the lack of real science in this world. One example is in the introduction of a character who has been called upon to help cure the Marquis of Sherrinford's headaches with a newly devised treatment involving talking and listening. The Marquis is astounded that simply talking about his childhood and taking a simple powder dissolved in water can cure him of his nagging stress headaches. The sorcerers at court call it a cheap form of magic (he does give the powder after all) while the Count helping the Marquis calls it Mental Science.

The strength of the book is in the fantasy elements. As in Garrett's work Lord Darcy here is assisted by Sean O Lochlainn, a forensic sorcerer who does all of the magical detective work by whipping up similarity spells that are akin to blood tests and DNA lab work, examining locks for protection tampering, manifesting traces of evil at each crime scene, and even placing a levitation spell on Darcy so that he can hover over the corpse in the shellacked ballroom without making marks on the floor. The cerebral detection and routine interrogation of suspects is left to Lord Darcy. He does yeoman but not spectacular work. When it comes time to reveal the murderer we get an action oriented trap and a messy and rushed explanation of the impossible crimes that turn out to have prosaic and lazy solutions. The murderer isn't even a character who we know among the large group of suspects. He is introduced two pages before he is identified as the culprit. For that I give Kurland a big "Boo!"

If you want to read about Lord Darcy, I suggest you start with the real thing. Read Randall Garret's much better stories. Once you are familiar with his world and characters then maybe you might want to investigate Kurland's two books as a curiosity. I liked his handling of the alternative universe twenty or so years after the original stories took place. He explained the history of this strange world and the magical hierarchy much more clearly than Garrett did, but the detective novel aspects and certainly the impossible crimes pale in comparison to Garrett's original work. 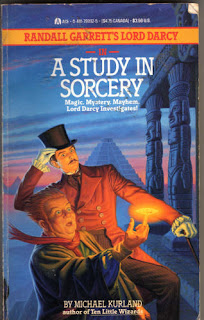 The Lord Darcy Series by Randall Garrett
Murder and Magic - novellas originally published in magazines between 1964 - 1973
Too Many Magicians (1966) - novel
Lord Darcy Investigates (1981) - short stories originally published in magazines between 1974 - 1979
Also, all three books were reissued in an omnibus put out by several different bookclubs called Lord Darcy.

By Michael Kurland (both originally published as paperback originals)
Ten Little Wizards (Ace, 1988)
A Study in Sorcery (Ace, 1989)
Both of Kurland's contributions to the Lord Darcy series have been reissued by Wildside Press.
Posted by J F Norris at 12:15 AM