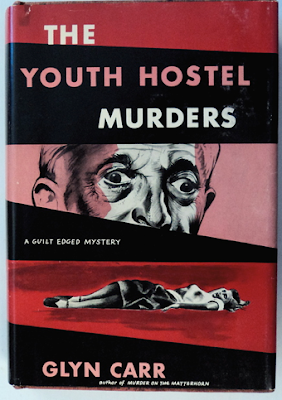 Abercrombie Lewker, a garrulous, somewhat pompous Shakespearean actor and avid mountain climber is one of the more unusual amateur sleuths in detective fiction. In his travels and rock climbing adventures he inadvertently stumbles across violent deaths that invariably turn out to be nasty murders.

Here, in the third book in the series Lewker's annoying, very artificial speech is considerably diluted from his debut in Death on Milehigh Buttress which I never finished because of the arch dialogue. Lewker has an irritating habit of peppering his speech with quotes from Shakespeare, Webster, Wilde, Shaw and other classic writers of the British stage. But I muddled through the first three chapters of this one and the engrossing story overshadowed all the dialogue eccentricities.

The story includes witchcraft, Welsh legends and lore, and hidden cache of paintings. I figured this one out very early on, but the rock climbing and the character contrast between the youthful suspects and the middle-aged Lewker made for a good read nonetheless.

Most of the good books in this series, including this title, have been reissued by Rue Morgue Press. One of their reissues - Death under Snowdon - is a book that is practically impossible to find in its original edition. A handful of the other Lewker books (not reissued by RMP) are also very scarce and fetch exorbitant prices in the used book trade.

Last year I reviewed Lewker in Tirol, one of the later books in the series. The post can be found here along with the full bibliography of the Abercrombie Lewker series.
Posted by J F Norris at 12:01 AM