Mrs. Roach stood there like a stock, with her hands clasped, thinking: Twenty-two pounds for a piece of useless bric-a-brac that could be smashed to fragments in an instant; and this was the woman who moaned that she could not pay the rates and made a scene over the telephone bill and turned away a poor, humble working man because he had done her out of a few shillings! Either the woman was mad or she was abominably cruel. 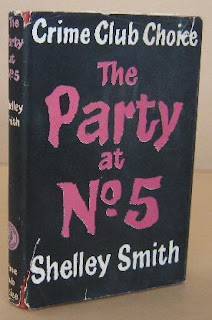 There should be a subgenre of crime fiction called Badass Biddies. It would encompass all the novels, movies, and plays about criminal old women ranging from Arsenic and Old Lace to the gruesome Still Waters reviewed  here last year. Falling somewhere in between the outright farce of Kesselring's play and the violence of McCrery's novel are the nasty acts perpetrated by the two women in Shelley Smith's The Party at No. 5 (1954). Here is a duo with whom you find yourself alternately sympathizing then pitying then loathing. It's something of a tour de force from this writer who specialized in genteel malice domestic and created a wide variety of despicable characters – often favoring middle-aged women as her criminal minded protagonists.

Contemporary crime fiction like the Golden Age is beginning to become increasingly formulaic with a variety of favorite conventions. One of them is the unreliable narrator. Patrick McGrath, for example, frequently used it often to great effect in his novels Asylum, The Grotesque and Spider. Others are less successful in creating characters whose wildly told stories are imbued with a haze of ambiguity. What is real and what is surreal? How much is truly happening and how much is the jumbled perception of a troubled or insane mind? Smith does an impressive job of presenting two women both of whom we learn of through a third person narrator and both of whom are not quite to be trusted in what they say and how they behave. It is only when each of the women is alone or thinking their private thoughts that we see them as they truly are.

Luna Rampage lives alone in a massive house cared for only by a single servant. She eagerly awaits a weekly letter from her daughter who has travelled with her husband to Malaya. She has few friends, but one among them, Cissie, is concerned for Mrs. Rampage. Cissie suggests Mrs. Rampage take in a companion who might also act as a second servant to help with the upkeep of the nearly empty house. Mrs. Rampage is insulted. She is perfectly capable of taking care of herself and dislikes the idea of her ordered private world being invaded by a stranger. The expense is first and foremost in her mind. Extra food, more electricity being used, more water being used. She'd have to go chasing after a boarder making sure lights weren't left turned on throughout the house. Regardless, Cissie returns a few dyas later and introduces Mrs. Norah Roach. She is the epitome of kindness and gentility. Despite all her fears and her initial antagonistic attitude Mrs. Rampage surprises herself by accepting Mrs. Roach into her home. And the war begins.

In addition to her parsimonious lifestyle Mrs. Rampage also is in love with collecting antiques and curios. She won't spend extra money on unnecessary electricity, but will dish out money for a rare objet d'art. Isn't that always the case with an obsessed collector? Mrs. Roach may seem all sugar and spice on the outside but she is as selfish as Mrs. Rampage. She also hides behind a sanctimonious religious mask that irritates Mrs. Rampage even more. While Mrs. Rampage calls Norah a "filthy cockroach" Norah prays for Luna's soul, followed by nightly diary entries in which she outlines her plans to slowly divest Mrs. Rampage of her precious belongings and secretly sell them so she can start building up a savings. When Mrs. Rampage starts to notice things going missing and turning up in Mrs. Roach's apartment the relationship shifts to a more dangerous level. The teasing and name calling escalate to mental torture and other mind games. A feud ensues of "your word against mine" with Norah maintaining her pseudo-friendly, passive veneer while Luna loses control, becomes volatile and vociferous. Luna is on the rampage and it leads to ruin.

The menace slowly builds throughout the novel and the shift in sympathies is alarming. The scheming and plotting and lying of one contrasts sharply with the melodramatic outbursts of the other. In spite of all her meanness and nastiness I began hoping some character would believe poor Luna's ravings. I also kept eagerly waiting for someone to slap Norah upside the head. I was reminded of how I found myself feeling so terribly sorry for the illiterate housemaid in Ruth Rendell's A Judgment in Stone only to be shocked when her frustration in trying to read leads the maid to that book's horrifically violent climax. Similarly, in Smith's book an incredibly loathsome woman is being victimized by a phony saint and you can only hope for a reversal of roles. But hope is futile here.

I also enjoyed Smith's choice of character names. Like the people you find in a Restoration comedy the names reflect the characters' personalities. In addition to the so perfectly named Luna Rampage and Norah Roach there are Lily Graveyard, a morbid housemaid obsessed with illness; Cissie Getaway, the friend who drops in and out of Luna's life like an express train; Henrietta Purvis, Luna's antique store owner confidante; and Jonquil Bracebridge, Luna's daughter who makes an eleventh hour appearance in attempt to bring some order to the chaos. If you're wondering where are the men - there are a few but they play very minor roles, usually as authority figures like Luna's lawyer "the Venerable " Geoffrey Bede and a visiting doctor. Completing the male side of the cast and not to be outdone by the thievery and duplicity of the women is the obsequious Mr. Peacock, a gardener who has some petty criminal deeds of his own he is trying to keep undercover.

I have three other Smith books I will be reviewing in the coming weeks. Her work is an excellent example of the kind of crime novel that I have become fascinated with in the last ten years or so. I find the subtleties and ambiguities of human behavior more intriguing than the cerebral puzzles of the detective novel. Slowly discovering what makes characters tick is a lot more interesting to me these days than poring over endless Q&A sessions while a detective tries in vain to figure out why Lord Fortescue lied about taking the 7:08 train to Luton only to stumble upon the answer by chance.