Have I ever talked about a fascinating bibliographic work that has been a reading guide of mine for several years? It's called 333 and it was published back in the 1950s. As the title suggests it is a catalog of three hundred and thirty-three books all of which fall into one of three categories: science fiction, weird or adventure. Within those three broad categories the genres are further categorized as Gothic Romance, unknown worlds, fantastic adventure, lost race, and Oriental. Of course there are some which combine one or more of these categories; it's always hard to pigeonhole this kind of fiction. For years I pored over the plot summaries of these books and slowly but surely managed to acquire or borrow from libraries nearly all of those that interested me. Now that I've pretty much exhausted the weird, fantastic adventure and lost race novels I'm working my way thorough some of the science fiction and fantasy works. Virginia Swain's only novel of the weird, The Hollow Skin (1938), is one of the first books I read that is included in 333. And it's one of the strangest books I've encountered in weird and supernatural fiction, primarily because of its shocking ending that seems to come out of nowhere.

Lex Drummond, a young doctor, travels to the Bahamas as a rest cure for his bothersome bronchitis. There he meets another physician who has been caring for some of the wealthier inhabitants of the island of St. Catherine’s. The elder doctor introduces the younger to Lady Mary, the resident “witch,” a wealthy woman who is obsessed with moving into a mansion located in an isolated part of the island. She is doing her best to coerce the current resident Mr. Percy Isher to leave and apparently is not adverse to tinkering with the occult in order to get her way. Isher is, however, adamant on staying. 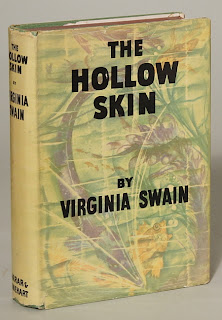 The story eventually involves the young doctor’s pursuit of Valentine, a beautiful young girl and her mysterious older female caretaker both of whom he later discovers are staying in the mansion with Isher. The young woman is Isher’s ward and the caretaker her governess who may or may not be Isher’s wife. When Isher’s Bahamian manservant dies after a mysterious accidental fall the young doctor is convinced that something strange is going on in the mansion. Lady Mary hints to the doctor that the death is perhaps related to obeah – a superstition laden local religion not unlike Voodoo of Haiti. Lady Mary seems to know a terrible secret about Isher but is devilishly teasing to the doctors. She will divulge nothing hoping that Isher will reveal himself and thereby allow her to come into possession of the mansion.

The first half of book is thoroughly engaging, but a middle section bogs down with an unnecessary subplot involving Freddie, an English playboy, who is intent on leaving the island even if he has to stowaway on a freight ship. Freddie apparently knew Isher and was his neighbor when he was a small child and gives some interesting background on the odd man and his ward, but ultimately this portion of the story is a bit annoying and intrusive as it takes away from the more interesting characters of Lady Mary, Isher and his daughter.

The book begins as a neo-Gothic with much supernatural content, and excellent handling of setting which enhances the mood in a Radcliffe manner. One expects the main story to be a battle of wills between Lady Mary and Isher. But since Swain insists on telling the story through the viewpoint of the least interesting character – Drummond – we mostly get a sappy love story involving the narrator and Valentine. Only when characters begin to die mysteriously does the book once again become action oriented as it transforms into a detective novel. The plot is complicated by evidence of snake bites on the victims and the book morphs once again into a pulp thriller. The final third of the book ends in an utterly unexpected bizarre twist. And if you intend to go looking for an affordable copy of this book from the usual online third party sites I suggest you avoid reading the plot blurbs in some of those book descriptions. A certain dealer who shall remain nameless (but he's the one who has a photo next to his copy) has a habit of giving away the ending of books like this and ruins the big surprise in The Hollow Skin.

I asked for some help on Virginia Swain's biography and literary life because I had little luck in digging up anything about her. I was curious if she had written anything else in the weird or supernatural fiction genre. I reached out to Douglas Anderson who has two fascinating blogs: Lesser Known Writers primarily devoted to obscure weird fiction writers and Wormwoodiana, the blog offshoot of the journal Wormwood, described as a tribute to "literature of the fantastic, supernatural and decadent." His knowledge of writers' lives and works is vast and impressive and he has a lot more resources than I do. He graciously obliged by finding this information about Swain who, it turns out, did indeed dabble in weird fiction in short story form:


Virginia Swain (1899-1968) was a journalist in the 1920s after getting a degree at the University of Missouri in 1921. In 1925 she married Philip Duffield Stong (1899-1957), who became a better-known and more prolific writer than Virginia; his best-known novel is probably STATE FAIR (1932). He did edit an fantasy anthology OTHER WORLDS (1941), containing a lot of familiar writers for WEIRD TALES (including Lovecraft), but it also has a story, "Aunt Cassie", by his wife.

One final interesting tidbit I dug up about The Hollow Skin. Apparently there was a contest to name this book. It was released without a title and readers were asked to contribute their own titles. The winner would win a $25 prize plus the honor of seeing their title emblazoned on the hardcover and its dust jacket. There is one dealer offering for sale a copy of the untitled review copy with the contest advertised on the book. It'll cost you an additional $50 plus the promised prize money to own that rare and unusual edition of this book. Several copies of the hardcover with and without the attractive dust jacket are also offered throughout the internet, all (I think) at affordable prices.
Posted by J F Norris at 12:18 AM