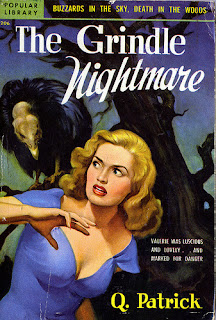 Sometimes I come across a book in my reading and I wonder how it was received upon it's first publication. So I trundle through the interweb looking for old book reviews. In the case of the fittingly titled The Grindle Nightmare (1935) I found these terse comments:

Animal and human killings in a mystery involving morbid psychology. A pathologist turns sleuth and ferrets out the answer. Good reading.

The Kirkus reviewer seemed to overlook the obvious. Good reading but no warning about the violent, grisly, and over-the-top lurid events you will encounter. Saturday Review hit the nail on the head, and delivered the kind of reaction I would have expected. Near revulsion.

I have to confess that I was surprised at the level of violence in this book. It ought to have been marketed as a "shocker." When it was twice reissued in paperback editions the sales teams at Popular Library and Ballantine recognized the book for what it really is. Each publisher promised horror and "gruesome surprise" on the covers and chose ominous vultures to symbolize the violent carnage inside the pages. A nice metaphoric touch (the buzzards are mentioned only in passing and never actually appear, by the way) rather than going for a more literal depiction of the book's grisly events. I'm sure that would have revolted even the most bloodthirsty of readers at the time. 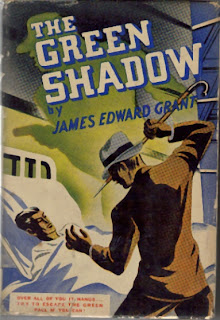 The book has more in common with the stories that filled the shudder pulps of the day rather than a puzzling detective novel. I think because of the lurid content no respectable publisher would touch it. No surprise that the hardcover edition was published, not by one of the leading houses of the time, but rather an obscure independent publisher. Hartney Press, a firm that appears to have only lasted one year, released the book and judging by their catalog that included such titles as Tough Little Trollop and Raiders of the Tonto Rim (both by utterly forgotten writers) they seemed to be attracting the readers of pulp magazines. They do have one claim to fame apart from giving us The Grindle Nightmare: one of their books has garnered cult classic status among crime fiction devotees. The Green Shadow by James Edward Grant has become one of those books with an amazing dust cover illustration that is very scarce and highly desirable (translation: outrageously priced) in the collector's market.

I like that punny use of the verb "to ferret." in the Kirkus review above. If you read the book you'll know that several of the victims are animals -- a mix of livestock and household pets -- including two dogs, a kitten, some sheep and goats, and a marmoset. [A what? I hear you say.] You know, that odd primate that fashionable 1930s women desired as an eye catching accessory. If you can't have an ocelot, go for a marmoset, right? One of the eccentric woman characters takes Queenie, her marmoset, everywhere often draping the animal around her neck like some kind of live fur. Very Charles Addams, I say. But enough of all this background and teasing. Don't you want to know what goes on in this wild book? Of course you do –- like a gawking rubbernecker at a highway accident you must be satisfied. 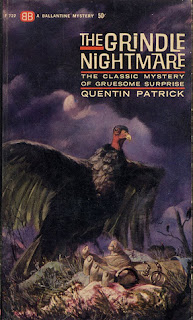 Grindle Oak has fallen victim to a madman on the rampage. Several animals have been mercilessly slaughtered and disemboweled over a period of weeks. Amid all the animal killings little Polly Baines has gone missing. Her father, Jo Baines, asks Dr. Douglas Swanson to help him locate the girl. He doesn't trust the police. Swanson is to meet Baines at the Old Mill Pond the next morning to start their search for Polly. But when Swanson turns up at the site he finds Baines dead, face down in the water. His body is abraded and bleeding, his hands are encased in animal traps. It appears that he has been dragged behind an automobile then his broken torn up body thrown in the creek that feeds the pond. And that's just the beginning of the human violence.
The book is a relentless assault of nightmare visions, a veritable horror show of sadistic torture perpetrated on both human and animal victims. A Sealyham terrier suffers a similar fate to Baines but is rescued before it is strangled by the cord tied around its neck. There is an arson attack, near daily discoveries of eviscerated livestock, and the constant fear that Little Polly will eventually turn up the second of the madman's human victims.

Mark Baines, the mentally challenged son of the murder victim and brother to the missing girl, is one of the more interesting characters in the book. He has a near supernatural command over animals. He can quiet a unruly dog and can run into a burning barn to rescue two horses that seem hypnotized under his guiding hands. But Mark is also known to have been somewhat cruel to some local girls and the townspeople are frightened by his uncanny love for animals and his indifference to people. It is suggested that Mark may have something to do with his sister's disappearance.

Animal research and animal abuse are at the heart of the story. Complaints from anti-vivisectionist groups and the SPCA are directed at the experimental research of Swanson and Antonio Conti, his scientific partner. They are in the process of creating hematologic sera and vaccines and use dogs and other animals as test subjects in their experiments. Both are targeted throughout the story with at least two people and the local deputy gunning for Conti as the sick mind behind the animal killings and torture.

This leads to a discussion of sadism and the possible escalation of a warped mind that finds perverse delight in harming animals to seek out humans as his targets. Abnormal psychology soon becomes the focus of Dr. Swanson's amateur investigation as he begins to suspect that his research partner may indeed have a few screws loose. Then an offhand comment about an infamous historic murder trial sends the story into an arena that is completely unexpected and a surprise ending that caught me completely offguard.

I'll spare you a summary of  the most horrific scenes in the book. You'll have to discover those on your own -- if you dare. I have two copies of this book and am willing to sell either one dirt cheap to anyone who is interested in delving further into its bleak world. But it's not for the faint of heart, as they used to say way back when. Gore hounds will love The Grindle Nightmare. All others stay far, far away.
Posted by J F Norris at 2:06 PM