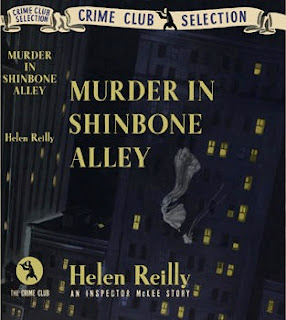 Barbara Baron, a student in fashion design at the International School of Design, is found in Shinbone Alley a forgotten byway in lower Manhattan. She plummeted to her death from the rooftop smoking terrace after modeling her winning design in the school's annual competitive fashion show. The sight of her body clad in her handmade bridal gown provides an ironic comment on her planned marriage to the school's president Jorden Fairchild. Suicide and accident are soon ruled out when McKee discovers evidence on the smoking terrace that Barbara had a visitor who gave her a fatal shove.  And it turns out that lots of people might have wanted to send her flying as Babs was a supercilious and loathesome woman.

For the first few chapters this is a fairly routine detective novel that I expected to have more insight into 1940s era police work. But truly it's more of a traditional fair play detective novel than it is police procedural. I was worried when the first few clues turn out to be tired cliches of the genre (a initialed handkerchief, used match sticks, for example) that it would continue down the pathway of the hackneyed. Then the theft of an Indian dagger used by one of the life models is stolen. McKee fears that the dagger will be used on one of the suspects who he is sure saw something on the terrace, but is unwilling to reveal his secret to the police. At this point the story picks up in pace and interest and all my fears of a lackluster story filled with familiar elements were assuaged. 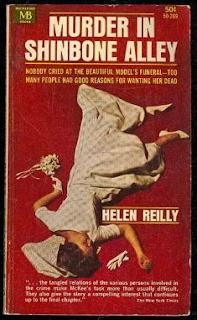 The art school and the various characters who make up the teaching and business staff make for an atypical background and liven the proceedings. Suspicion falls on Nairn English, one of the students, and Philip Mountain, an art instructor. McKeee knows that each is withholding information and in the manner of Trent's Last Case seem to be protecting each other thinking the other is the killer. When the mentally challenged errand boy of the school, Willie Cleet, is found stabbed and Philip is seen fleeing the crime scene and climbing a wall with bloody hands McKee focuses his investigation on finding the art teacher and has his men follow Nairn hoping she will lead him to their suspect.

Highlights of the book include the scenes devoted to the minor police characters' contributions to the murder investigation. Todhunter, a mousey nearly invisible cop, has an uncanny ability to transform himself into other personae. He does a mean drunk impersonation and uses that skill to gain access to Nairn English and gets her to confide in him without letting on he is actually a policeman. Another officer, Captain Pierson, has a great scene where her pursues Nairn though the cemetery at Barbara Baron's funeral. He falls in a shallow grave muddying himself, loses his subject, picks up her trail again and finally tails her to Mountain's hiding place. It was one of the most cinematic set pieces in the book reminding me of a similar graveyard chase on foot in Hitchcock's Family Plot. 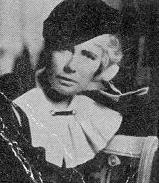 Helen Reilly was a pioneer in the police procedural novel. She was one of the first women writers tackling this subgenre as early as the late 1920s. Howard Haycraft said in Murder for Pleasure (1941) that her novels about McKee "are among the most convincing that have been composed on the premise of actual police procedure." Perhaps her other books show off her knowledge to better effect. Surprisingly, the books ends with one of those "gather the suspects in one room" scenes and McKee's seems like something out of an old Agatha Christie novel than the kind of book contemporary police procedurals are these days. Still, Murder in Shinbone Alley (1940) is an enjoyable detective novel with a truly surprising least likely person revealed as the murderer.

AVAILABILITY:  Luckily, this is a book that was reprinted in paperback edition by Macfadden and it went into two printings.  Multiple copies of one or the other are available online ranging from $2 to $15.  Not bad when I usually recommend books that 1. you can't find or 2. will cost you the equivalent of a winter month's heating bill.

This marks seventh book in the first part of my three part 2012 Vintage Mystery Reading Challenge sponsored by Bev at My Reader's Block. Links to the previously reviewed books are listed below.