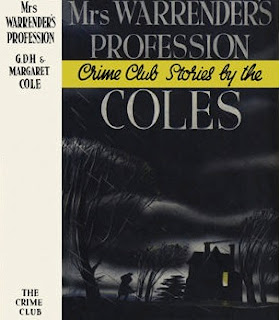 I ran across this little known volume of novellas at the main branch of the Chicago Public Library (though it may not be there anymore). The book details the accidental sleuthing adventures of Mrs. Elizabeth Warrender, the elderly mother of private detective James Warrender. She is the only other series character created by G.D.H. and Margaret Cole who are better known for their novels and stories about Superintendent Henry Wilson. Mrs. Warrender helps her son and sometimes outright investigates herself using her basic understanding of human nature. She gets to know people through casual but attentive conversation, she learns their habits and manners, most of all she listens to what people say unlike her son who she accuses of being unobservant. He focuses on the criminal behavior which she believes blinds him to true observations and completely overlooks people as they really are. This is all outlined in a brief "biographical" introduction titled "The Detective's Mother" that serves as a prelude to the four novellas. Overall, the collection is a mixed bag of the ordinary, the convoluted, and the intriguing. Apart from the supposed human observation theme running through the stories they also have in common a pronounced fascination with unusual murder methods. 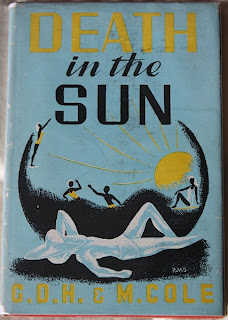 Death in the Sun - Jeremy Haydon, handsome ballroom dancer, loves to work on his tan when he's not whirling women around the dance floor at the Grand Hotel in Madeira. Mrs. Warrender (and everyone else) loves to look at him whether dancing or swimming or just laying in the sun.  She senses something is wrong when she notices several flies on his body are not being swatted during one of his many sun worshiping sessions. Surely if he had fallen asleep so many flies would've disturbed him. She asks Dr. Lang to check on Jeremy who discovers the body is cold to touch even in the blazing sun. Jeremy is dead. A hypodermic needle is nearby and foul play is suspected. The detection here is not fair play, many clues are withheld from the reader and announced later by Mrs. Warrender who alone was privy to them. This is atypical of what little I've read of the Coles.  Maybe I'm wrong and this turns out to be their M.O. for the bulk of their work, but it annoyed me nonetheless. The biggest clue is one of the lousiest examples of a contrived coincidence that even Dickens would never have resorted to. Not one of the best in this collection. 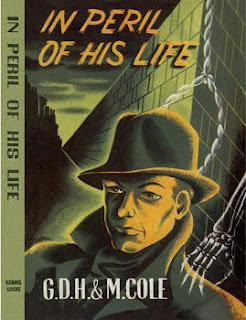 In Peril of His Life – A confusing and convoluted story about the murder of Lady Robinson, wealthy philanthropist and primary supporter of the New Money League, a financial advisory agency disseminating propaganda about an alternative economical system for Britain. Her lawyer, whom she confronted in the past of attempting to kill her with altered food, a trip wire across the stairs, and other wild accusations, is charged with her strangulation murder. Sprinkled throughout the story are interesting allusions to R. Austin Freeman's The Red Thumb Mark and the borrowing from that novel the use of forged fingerprints to frame an innocent party. Mrs. Warrender is less concerned with who killed Lady Robinson and instead focuses on the disappearance of Lady Robinson's nephew. She is convinced he will turn up dead somewhere while her son and the police think he just fled the country. For me this story was tediously drawn out. The ending is anticlimactic and anyone who is familiar with Christie's Peril at End House will probably have figured it all out as I did. 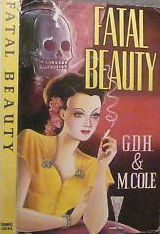 Fatal Beauty – Jean Dawson, an employee from the Rose Salon, travels to the home of wealthy Mrs. Mortimer to give her facial massages and skin treatments with a specially concocted cream made by Madame Rose, the owner of the salon. Mrs. Mortimer soon dies of poison but the police and authorities are stumped as to how it was administered. Her nephew is suspected and a jealous housemaid implicates him further when she mentions he tried to get his aunt to use a homemade complexion wash made from flypaper soaked in rose water. Jean warned Mrs. Mortimer to avoid using it because of the dangers of arsenic in the flypaper. Mrs. Warrender appears in the final third and solves the crime through sheer luck. When she visits the Rose Salon she recognizes from a past encounter the culprit among the employees. It's a pretty neat tale with another of those revenge crazed killers who takes months to plan an insidious crime so often found in Golden Age detective story plots. However, the method, the culprit, and the frame-up are easy to uncover and nothing is very surprising. The story also is overly long. It could easily have been told without all the introductory background of the salon employees' relationships which takes up the first third of the story. The whole thing has a tiresome domestic air about which is a kind way of saying there was a lot of girlish chit chat about nothing of real consequence or importance to the main plot. 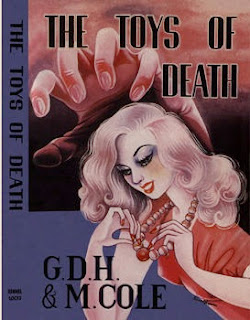 Toys of Death – Easily the best of the lot. A true detective story and the second tale in which Mrs. Warrender is present at the scene of the crime. She also does the only real detective work here (discovering pieces of blue glass for instance) rather than doing her kind of inductive guesswork based on her "observations of real people."

Crampton Pleydell is found dead in his locked study. His death appears to be a suicide from cyanide poisoning. As the story progresses we learn that Pleydell has a strange hobby – replicating Renaissance Italian glass. His specialty was designing duplicates of Vetturi's poison toys – glass ornaments and glass jewelry filled with poisons that were used by the Medicis to commit assassination. This is something that seems to be more up John Dickson Carr's alley than the Coles. That aspect of the story held my interest and make it the most original and intriguing of the bunch. The motive for the crimes (there are other deaths) makes the most sense out of all the stories and the characters are the most interesting. No shop girls, beauty parlor employees, gorgeous dancers or office gossips on hand in this one which was a relief. 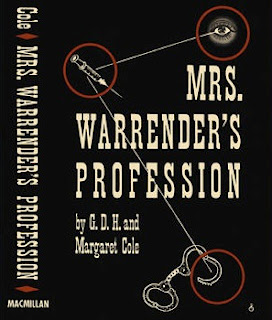 After the book Mrs. Warrender's Profession (1938) went out of print in the UK two small publishers decided to reprint each of the stories separately. They were printed in hardcover format and treated like mini novels complete with very attractive artwork on the dust wrappers. Some of these booklets (it's hard for me to call a 65 page work a book) went through multiple printings, amazingly enough, but were only released in the UK. A similar reissue process was also done with the other Mrs. Warrender stories (and two Superintendent Wilson novellas) found in the ultra rare book A Lesson in Crime (1933). Scans of the covers from those individually published volumes are used to illustrate this post.
Posted by J F Norris at 10:06 AM