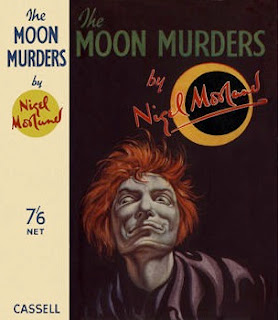 The dedication to The Moon Murders (1935), Nigel Morland's debut as a crime fiction author, is to his mentor Edgar Wallace who he also credits with having given him the idea for Palmyra Pym. In the history of all detective fiction Palmyra Pym is the first woman police officer of high rank in command all her investigations. There have been female fictional private detectives and perhaps a few female police officer characters in the crime fiction of the late 19th century and early 20th century, but Mrs. Pym is unique with her high rank of commissioner and therefore a true pioneer for women characters in the genre.

While they display the usual elements of a traditional detective story the Mrs. Pym books are at their core police procedurals. Morland was a true crime addict and journalist and knew how Scotland Yard really worked during his lifetime. The drudgery of paperwork, the backbiting among colleagues, the sergeant trying his best to prove his skills and shine in the eyes of his superior, and the utter bureaucracy of the life of policemen -- Morland captured it all. The Moon Murders is concerned with not only the investigation and apprehension of the criminal but also the inner workings and bureaucracy of police departments and most especially the relationships of police officers with their partners and superiors. The life of police behind the scenes is really what distinguishes a true police procedural from the usual whodunit and will become the hallmark of such later crime writers as John Creasey in his books about Commander Gideon and Inspector West representing the UK and Ed McBain and Jonathan Craig in the their treatments of urban American precinct life. Morland to me seems to have nailed the formula combining detection, police work and police relationships in his first book. It's not just an entertainment it is a real novel of character.
﻿
﻿Like the oddball characters of Johnston McCulley's pulp magazine stories (The Crimson Clown, Black Star, and the Demon) London is plagued with a master criminal with a penchant for theatricality. Several shooting deaths have been attributed to someone calling himself "The Man from the Moon." At each crime scene police find a calling card stamped with a yellow crescent and a taunting typed message. He makes surprise appearances at Scotland Yard dressed in a billowing shapeless gown, a grisly white mask and a red fright wig and challenges Mrs. Pym to stop him before he strikes again. She is certain that "The Man from the Moon" is not acting alone and it's all a smoke screen for a crime syndicate planning something far more insidious and harmful to the city.

In one of his more daring acts the masked criminal manages to escape her office unseen by a guard on duty foreshadowing Morland's later fascination with detective novels that feature impossible crime aspects. But Mrs Pym will have nothing to do with locked rooms and impossibilities. When anything seeming to be an impossible crime surfaces she quickly dismisses and proves within minutes how the "miracle" was accomplished. One thing a criminal should never do with Mrs. Pym is toy with her unshakable respect for logic and common sense.

Morland takes the Holmesian approach to crime detection to its extreme with Mrs. Pym who tries her best to get her men to see things as they really are. She walks into a room and within minutes can tell you who has been there and she teaches her police to do the same. In her partner Inspector Shott she glimpses the potential for an excellent detective, but their first few days together are like Beatrice and Benedict trading insults. One of the best examples of her amazing detective skills comes in her examination of the rooms at Ensor Mews where a reporter has been kidnapped. Based on indentations in the carpet, an uneaten breakfast, and hand prints left in dust on a table top Mrs. Pym figures out not only precisely what happened in the room, but the height and personality of the kidnapper. Holmes could do no better, I think. 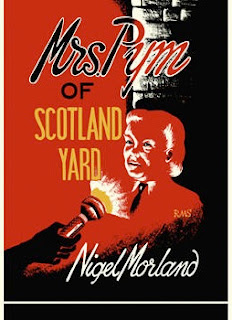 When her loyal Chinese servant and dear friend is killed in a shootout/car chase that results in a fatal car wreck Pym's irascible personality transforms into a powerfully enraged and cruel Nemesis. She vows to bring in all the criminals in the gang headed by "The Man from the Moon" even if she has to kill every last one of them herself. It's an astonishing scene and the metamorphosis is something to marvel at. Rarely do we get this kind of character arc in any detective novel of the period.

Her shift in character and motivation is marked by an ever increasing unorthodoxy and flagrant violation of police protocol. She begins to resemble a brutal American cop not the usual genteel British police officer of a traditional detective novel. We know that she has spent some time in the U.S.A. (Omaha and Nevada are both mentioned) and she confesses that she had some respect for the tactics of the "third degree" favored by American police. She even stoops to bribing witnesses to speed up the investigation and get her closer to ferreting out the killers. Her superiors are shocked and lecture her. Even Shott is appalled by her sudden changes. He is concerned that Internal Affairs might get wind of Pym's "rule bending" and repeatedly warns her to curb her methods lest her actions lead to probation for both or the end of their careers. 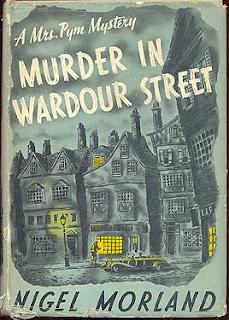 The Wallace influence comes into full force when in the final pages Morland creates one action sequence after another in relentless succession. There is an exciting airplane chase complete with a gunfight that could've been lifted from a war movie. Vengeance is hers. Aiming straight at the plane's gas tank Mrs. Pym fires in rapid succession crying out "Frizzle you murderer!!" her fury punctuated with not one but two exclamation marks. Her rage so overcomes her Mrs. Pym doesn't even realize she has been shot in her wrist until she's on the ground. A later shoot out in the villains' hideout is a bloodthirsty barrage of bullets and bodies falling that makes the St. Valentine's Massacre look like a tea party. Mrs. Pym orders her men to open fire and "Give 'em all you got." When she is aiming at one of the nastiest of the lot she addresses him, "Speak well of me to the dead" then empties her gun into him. Mickey Spillane night approve of Palmyra Pym's crime fighting methods, though he would hardly approve of her bulldog features, her less than shapely figure and her taste in mannish attire and ugly hats.

A bibliography of the Mrs. Pym. detective novels can be found here along with an updated and complete list of all other crime fiction Nigel Morland wrote under a variety of pseudonyms. In the coming weeks I will feature an article on all of his Sgt. Johnny Lamb novels written under the name "John Donavan."

The Moon Murders counts as one more book in my Perilous Policeman category of my three part 2012 Vintage Mystery Reading Challenge sponsored by Bev at My Reader's Block. Links to the previously reviewed books are listed below.

Part I. Perilous Policemen
The Case of the Beautiful Body - Jonathan Craig
Murder by the Clock - Rufus King
The Death of Laurence Vining - Alan Thomas
Posted by J F Norris at 11:17 AM