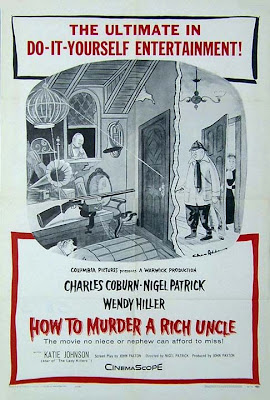 Charles Addams might have liked to introduce his ghoulish cartoon characters to the Clitterberns. They would have got along marvelously. Murder becomes an obsession in the household whether it is as lurid entertainment like the novels (This Is Indeed A Bloody Business is one title) that Mother Clitterbern finds so highly amusing or the means to solving their financially wrecked household.  Fittingly the movie poster for How To Murder a Rich Uncle (at left) was designed by Charles Addams. The Rube Goldberg inspired deathtrap in the illustration is not Addams' exaggerated invention, but rather one of the many methods employed by the desperate Henry Clitterbern who is intent on knocking off his uncle so he can inherit his fortune and pay off his debt ridden estate.

Nigel Patrick (who also directed) as Henry, assisted by Edith, his compliant and devoted wife (Wendy Hiller in a flighty and odd performance) as well as Albert, his dunderhead of a son (Kenneth Fortescue), is determined that visiting Uncle George die a fatal accident. But Uncle George has luck and coincidence on his side as each carefully thought out murder plan is upset and backfires resulting in the death of a member of the family. It's sort of like Kind and Hearts and Coronets filtered through a kind of Murder for Dummies handbook.

The script by John Paxton is adapted from a French farce called Il faut tuer Julie by Didier Daix.  Translated as We Must Murder Julie I have not been able to find anything about that play nor have I been successful locating it under its original French title. But I suspect that it is not the very British and macabrely funny story we watch in the movie.  The script makes fun of American conventions like tea bags, corn flakes, banking and ridicules the old world of post WW2 English aristocrats still clinging to their entitlement and decaying mansions.  I thought most of the cast was perfect especially Hiller, Athene Seyler as her mother (called Grannie in the credits) and Charles Coburn as the apparently oblivious Uncle George.

The scene stealing star of this movie is Katie Johnson in her final movie role. Her penultimate film and her most famous role came right before this when she appeared as the kindly Mrs. Wilberforce in The Ladykillers (1955) starring Alec Guinness. Here as Aunt Alice, Johnson presents herself as a soft voiced, fanciful dreamer taken for granted by Henry and family as nothing more than a doddering old maid. She has a habit of appearing out of nowhere and making some of the most pointed observations giving her, in addition to her childlike qualities, a bit of a spooky Sibyl persona that irritates and frightens Henry more than he is willing to admit. Later, we will learn she has no magical powers or gift for ESP but rather has a penchant for eavesdropping in a variety of secret hiding places. She is a delight to watch and I kept rooting for her to put an end to the madness before she too became an inadvertent victim.  I was sure she would be the last one standing. Her final scene at the inquest is a marvel as she does a turn at spinster sleuth lecturing that rivals anything from Jane Marple.

Two actors who would go on to bigger and better things appear here in small roles. Musical theater actor and composer Anthony Newley is the boyfriend of Henry's daughter and he fancies himself an amateur criminologist who is sure that the accidents are murder attempts though he has the wrong culprit in mind. In a tiny role as Gilrony in which he utters only one syllable repeatedly ("Aye!" in some wretched accent of indeterminate origin) a ruggedly handsome and very blond Michael Caine makes his first credited film role. He's almost unrecognizable in this incarnation.

The breakfast scene in which Uncle George's corn flakes and tea bags create havoc and Edith suggests an extra ingredient they might introduce into Uncle George's tea can be watched here.

The entire movie, broken up into six parts, is available for free viewing at YouTube.

This is my contribution to this week's "Tuesday's Overlooked Film" hosted by Todd Mason at his blog.  Be sure to visit Sweet Freedom and check out the rest of the insightful comments on unusual films, TV shows and video creations.
Posted by J F Norris at 7:49 AM