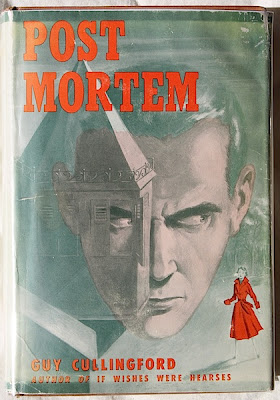 Gilbert Worth, adulterous husband and acerbic novelist, is found dead in his study with a bullet in his temple and the smoking gun clenched in his hand. Much to Gilbert's surprise he seems to have survived the murder -- or rather his ghost has survived to look upon his own corpse. While the members of his family believe he has committed suicide Gilbert knows better. Someone killed him. Someone who tried unsuccessfully twice before - once with a carefully placed glass marble on the staircase, the second when his nighttime warmed milk was tainted with something bitter and palatable. He fed it to the cat and it was dead in the morning. Gilbert's spirit seems doomed to walk the Earth until he is satisfied with just who in his household hated him so much to send him off to an early reward. Though it's not so rewarding to Gilbert even if he can pass through walls and enter locked rooms without being seen.

At first I thought this was intended to be a satire of the detective novel. The victim comes back from the dead to solve his own murder?  Surely this has to be done with some sense of humor.  And it is. But Gilbert Worth is hardly a likable character and his children devoutly loathe him. Yet even though Worth tells the story of his mysterious death with a wicked sense of humor and spends much of the book spying on his relatives and the servants in some keen satiric scenes there is a pervasive somber air about the piece with hints of tragedy about the innate dysfunctionality in this loveless family.

In the early part of the book the best scenes were those in which Worth seems to make fun of his plight as a ghost. He attends his own funeral and hears a musical selection that embarrasses his family as it turns out to be an upbeat folk tune that is a particular favorite of Rosina Peck, his mistress and sex-crazed secretary. Later, he finds himself oddly moved by the sermon the minister gives and falls to his knees in guilt ridden prayer. Even Worth's own father appears to him and attempts to guide him into the afterlife but Worth will have none of that until he solves the mystery that faces him. There is also an entire chapter devoted to the servants in which we learn that the timid housemaid Ada Jenkins has a passionate hobby in stamp collecting and is belittled by her co-workers for such a frivolous, money wasting pastime. The cook Mrs Mace, another maid Jessie, and the nasty gardener Mr. Williams are all sharply drawn portraits with carefully rendered individual voices. When even the minor characters receive this kind of attention from an author you know you have a work of fiction worth some notice. Before the book becomes deadly serious and shifts into a neo-Victorian mode this was one of the highlights for me.

The humor dissipates further with Gilbert's "investigation" which he is also writing down in manuscript form. It all becomes excessively melodramatic past the midpoint and by the final scenes I felt like I was reading something by Wilkie Collins or Mary Elizabeth Braddon. Overwrought emotions are on constant display. Multiple confessions of family secrets and murderous impulses force friends and confidantes entrusted with these confessions into dilemmas of moral conscience. Several characters resort to blackmail, there are witnesses to the murder, and witnesses to the witnesses!

This is not meant to disparage the book. On the contrary, Post Mortem (1953) is a remarkable achievement -- begin like a satiric detective novel, add the element of a modern ghost story, then slowly transform the whole work into a Neo-sensation novel. The high emotion is mirrored in the heightened prose sending the story to soaring heights both metaphorically and literally when ghostly husband and haunted wife face each other on the rooftop of Turret House. A neat epilogue written by the son of Worth's publisher brings all the fantasy crashing down to Earth not in anticlimax but in a truly satisfying manner with a final twist that explains both the mystery of Gilbert's death and the riddle of a how a ghost can have written his own autobiography.
Posted by J F Norris at 6:33 AM