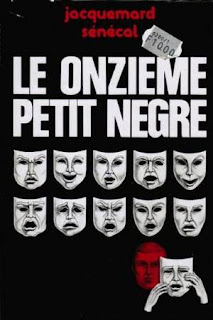 I told someone a while back that Agatha Christie would never appear on this blog. I wanted to devote my time to writing about the books that people overlook or have never heard of. Well, rules are meant to be broken. In my latest mini-obsession with French mystery writers I have just read a extremely clever novel inspired by the works of the Grand Mistress of the Whodunit. And so here - at least in passing - is my first post about the writer I said would never appear on these pages.

Yves Jacquemard and Jean-Michel Sénécal are two actors and playwrights who collaborated on over twenty plays for the French stage. They also wrote a handful of mystery novels - two of which were translated into English. Their second mystery novel is inspired by one of the Christie books adapted for the stage -- Ten Little Indians or, as it is known in the US edition, And Then There Were None.

The idea is an intriguing one. A French director writes his own adaptation of the Christie novel sticking to the grisly and depressing ending and not the relatively happy ending of the stage and later movie versions. He also adds expressionistic make-up (of his own design) and other late 1970s style theatrical gimmicks in his new version of the Christie standard. We are introduced to the entire cast of the play, the director, the theater owner and other employees of the theater in a quick four chapters in which some deep, dark secrets are hinted at, petty jealousies are revealed, and volatile emotions expressed. Then in Chapter 5 ("The Day of the Tragedy") the entire cast of the play - save one actor - is discovered murdered, the custom make-up that all the actors wear has been poisoned. Adding to the mystery is one unknown dead man found in the dressing room of the lone survivor. The tabloid newspapers dub this mystery corpse "the eleventh little Indian." In a typically ironic twist the survivor of the cast, and the one who discovers the bodies of his fellow cast members, is the actor who is playing the judge. 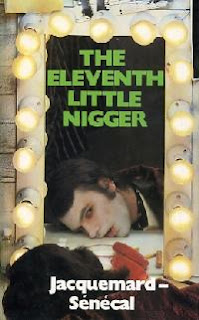 The entire novel is a whirlwind of retro mystery novel plotting and detection. In true Golden Age tradition it also has a map, a timetable, and an alibi chart to help illustrate the complexities of the story. A forgotten crime in the past, a typical Christie device, resurfaces to serve as a potential motive for the mass slaughter of actors and actresses. Hovering in the background is the figure of a dead actress - Edith Terray - who keeps coming up in conversation and eventually becomes the link connecting all the characters in the story. Intricately layered with dozens of surprise revelations this is quite an entertaining romp. I enjoyed it so much I am already in search of the only other Jacquemard-Sénécal novel translated into English. If I was better at French than my few rudimentary cafe and Metro phrases I'd read all the rest of their books as well.

One caveat, however. Unless you are familiar with And Then There Were None you probably should not read this book. At one point in the story the theater director mentions a character and identifies it as the killer in the play they are working on.

But for those many of us who already know the source material whether it be the novel, the movie, or play version, this is a highly enjoyable homage to the traditional whodunit and Agatha's works. Should you have a deeper knowledge of the Christie canon than just the one book you will enjoy it even more. There are many allusions to other Christie novels. I spotted references to Murder on the Orient Express, The Murder of Roger Ackroyd, Mrs. McGinty's Dead, Peril at End House, The Mousetrap, and Witness for the Prosecution. For this first time in a long time I can enthusiastically recommend this book for all Christie aficionados and for anyone who loves a good old-fashioned style detective novel.

NOTE: As can be seen in the book scans I used to illustrate this post, the French and British editions of this book use the original forbidden word in the title. The US version substitutes the word "Indian" as was done for the 1965 movie of Christie's novel and all subsequent versions. 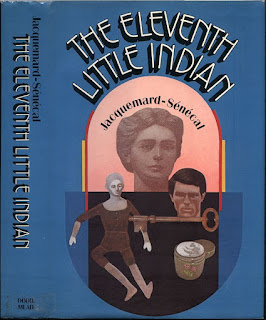 The Mystery Novels of Jacquemard-Senecal