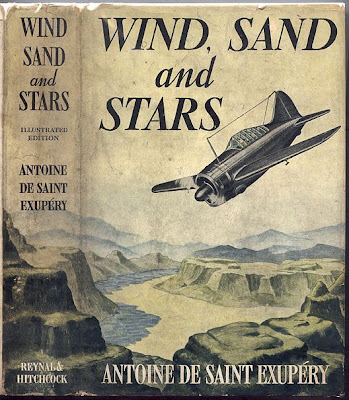 Antoine de Saint-Exupéry, as nearly everyone who took a French class knows, is the author of The Little Prince and I think that tiny cultish book has overshadowed his far richer body of non-fiction. Of the several volumes he wrote about his experiences as a pilot during the 1920s and 1930s my favorite is Wind, Sand and Stars. As I mentioned elsewhere on this blog it is a work of non-fiction that reads like a novel. It is like a collection of philosophical essays covering observations about the planet and heavens, the forces of Nature, different cultures and their people and all of it enlivened with a few real life adventures both perilous and thrilling.

Briefly, the book is an account of Saint-Exupéry's days as a pilot from his earliest time as a student pilot in 1926 to his professional pilot life ending, in this volume, in 1936. He relates several of his more adventurous flights across the Sahara and the Andes, flying near a waterspout during an African typhoon, and recounts the dangers of flying in early airplanes that practically fell apart in the skies. There is a harrowing section detailing his crash in the Sahara desert and the several days he and his navigator, Andre Prévot, spent in search of food and water prior to their rescue.

The English translation is by the Lewis Galantière, a gifted writer himself. His translation of Jean Anouilh's play Antigone is a skillful work of poetry. Galantière does an equally remarkable job of capturing the essence and tone of the original French text which is a blend of lucid prose and rich metaphor that approaches true poetry. Here are some of my favorite passages:

But by the grace of the airplane I have known a more extraordinary experience than this, and have been made to ponder with even more bewilderment the fact that this earth that is our home is yet in truth a wandering star.

In the sky a thousand stars are magnetized, and I lie glued by the swing of the planet to the sand. A different weight brings me back to myself.  I feel the weight of my body drawing me towards so many things.  My dreams are more real than these dunes, than that moon, than these presences.

It is another of the miraculous things about mankind that there is no pain nor passion that does not radiate to the ends of the earth. Let a man in a garret but burn with enough intensity and he will set fire to the world.

Men who have lived for years with a great love, and have lived on in noble solitude when it was taken from them, are likely now and then to be worn out by their exaltation.  Such men return humbly to a humdrum life, ready to accept contentment in a more commonplace love. 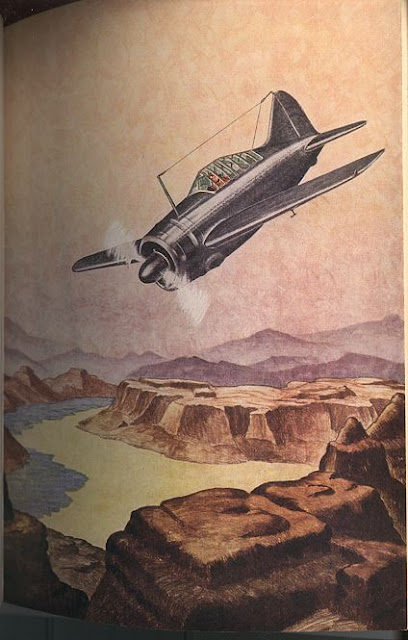 But in the end, Saint-Exupéry says "it is man not flying that concerns [him] most." The stories of his fellow mail pilots, his comrades of the air, the Bedouins who saved him in the desert, and even a sleeping child on a train provide him with confusion and enlightenment, despair and hope. This book written over 70 years ago still impresses me with insight and truths about a world that does not seem to have changed much since 1939.
Posted by J F Norris at 7:00 AM