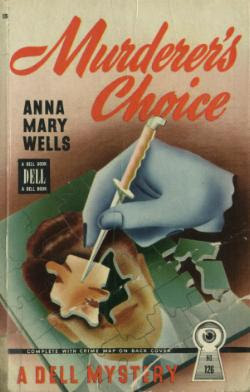 There are few female private detectives in the novels and stories of the 1930s and 1940s. Some made appearances in the pulp magazines alone (Violet McDade & Nevada Alvarado, Carrie Cashin), some made it to novels by bestselling writers (Dol Bonner created by Rex Stout, Bertha Cool created by Erle Stanley Gardner). It's understandable that Grace Pomeroy, who makes her only appearance as a P.I. in Anna Mary Wells' second mystery novel, could get lost in the history of the genre. But Grace deserves some mention for her interesting background. She was formerly a psychiatric nurse and appeared as such in Well's debut mystery novel A Talent for Murder. In her second appearance, newly employed in her second career, Grace solves the strange case of an odious man who apparently committed suicide in order to frame his cousin for murder.

The story has an intriguing premise and is handled deftly in the first third of the book. Mystery writer Charles Osgood confronts his cousin Frank for whom he harbored a lifelong loathing with a horrifying prophecy. Osgood will commit suicide and make it look as if Frank killed him. He has taken out a $100,000 life insurance policy to provide the motive and assures Frank that evidence will surface that will lead police straight to Frank's door. When Charles dies of seemingly natural causes Frank seeks out Miss Pomeroy at the Keene Agency to help him find the evidence that will lead to his arrest and conviction before the police manage to find it.

Grace patiently listens to Frank's outrageous story but it takes some effort on her part to completely believe him. Her investigation of the odd circumstances surrounding Osgood's death takes her to lawyer Marcus Winterbottom who informs her that Osgood has squandered his fortune yet there is no record of how he managed to spend so much money in such a short period of time. No bills, no paperwork of any kind. And there is no record of the life insurance policy Frank insists Charles purchased prior to his death. Grace tells this to Frank and he gets the idea to gather all the interested parties in the case at Osgood's Connecticut estate where they will all hunt through the house in search of any documents that will support Frank's case and explain what happened to all the money. 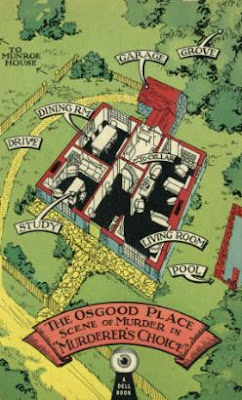 At this point the story devolves into a spin on the typical Mary Roberts Rinehart novel with a variety of characters -- Frank's histrionic fiancee Kay, his domineering mother, a stolid housekeeper who wants the $1000 promised her in Osgood's will, the lawyer, and an ex-chorus girl claiming to be Charles' wife -- alternately bickering and insulting each other as they tear apart the house in search of hidden treasure, in this case the life insurance policy. I was also reminded of that old silent movie The Cat and the Canary minus the phantom jewel thief/killer. When Frank is found passed out in the wine cellar hallucinating and babbling it is at first thought that he is drunk until Kay reminds everyone that Frank doesn't drink alcohol. Then Grace, using her knowledge of nursing, suspects that he may have been poisoned. What if Charles had also been poisoned, she thinks? And Frank has just discovered the evidence of that poisoning in the cellar. Did Charles also intend that Frank be killed?

Wells has some fun with the detective novel tropes and even the work of her fellow mystery writers. Part of Grace's research into Osgood's motivation for his bizarre plan to incriminate Frank involves her reading eight of his novels back to back in one evening. In her reading she learns that Osgood specialized in the impossible crime type of mystery novel (a Polish countess has her jeweled necklace stolen from her while she's wearing it in a well lit ballroom, a man is shot in the chest surrounded by several cronies in his locked dining room, girl disappears without a trace while walking to the grocery store). His detective Silas Smith is a "rough and ready Midwestern farmer" who solves his cases "either by analogy from the simple homely experiences of the farm or by induction based on abstruse quotations from the works of Mark Twain or William Dean Howells." In an earlier scene she asks a hair salon employee if she has ever heard of Charles Osgood the mystery writer. The hairdresser, not the brightest bulb in the chandelier, can't even distinguish between a writer and a fictional character. She says, "Is he the fat one? [...] No, he's named after an animal or something. Do you mean the lawyer?" Apparently she's read a few but can't even remember the names of Nero Wolfe, Perry Mason or even Mr. Moto who she rudely calls "the Jap."

The plot to frame Frank and possibly kill him turns out to be even more complicated that originally thought. Grace using a combination of skilful interrogation, her knowledge of psychiatry and behavior, and a little medical research into the poisonous properties of herbs comes up with a whopper of a solution. What she does with her information is even more surprising in an ending that is rather subversive at the time of the book's publication.

NOTE:  Our congenial and ever efficient guest host this week is Todd Mason.  Click here to see the rest of the list for this week's edition of Friday's Forgotten Books.
Posted by J F Norris at 3:06 AM