FFB: The Room with the Iron Shutters - Anthony Wynne 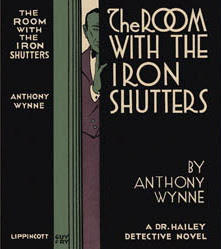 When it comes to dreaming up preposterous variations on the locked room and devilish murder methods in the detective novels of days gone by one of the most imaginative writers was Anthony Wynne. In his fairly steady output of nearly 30 novels from 1925 to the late 1940s more than three quarters of them contain some type of locked room, impossible crime or miracle problem. Very often the books had combinations of all three in the often convoluted and excessively melodramatic plots he concocted. So why is he forgotten these days? Well, to be perfectly honest he was not a very good writer. The books are somber, humorless and contain dull passages of didactic dialog in which his detective, Dr Eustace Hailey, pontificates on "modern" psychology and "newly discovered" scientific methods. Reading them seventy years after they were originally published can provoke reactions ranging from the disconcerting to the risible. On occasion Wynne does a good job of combining his outlandish methods of doing in fictional characters, his love of melodrama and scientific lecturing with sound story telling and a unique atmosphere and theme. One of those instances of where he gets it right is in The Room with the Iron Shutters.

I'm willing to forgive Wynne for the drawbacks in his books. I'm in them for his frightening ideas about committing murder and disposing of corpses. Often there are fantastic elements that seem to border on science fiction horror worthy of an episode from Fringe or The X-Files. Wynne was one of the first crime writers to use the following unusual murder methods: poison cat claws, anaphylactic shock through insect bite, blood poisoning, and miniature surgical blades hidden in everyday objects. He also managed to find numerous ways in which to have the corpse reanimate for its last dying breath. Many of his victims suffer cruel deaths traveling from one place to another while dying agonizingly from their wounds. In some cases the victims are completely unaware that they've been mortally wounded. The reader should expect a wild ride when he picks up a book by Anthony Wynne.

The basic set-up for this one: Lord Gerald Glen is discovered dead in his locked and shuttered study. He has been stabbed through the heart. No weapon is found in the room. The room was watched from both inside near the locked door and outside where the iron shutters of the title were bolted shut. The majority of the detection is devoted to close scrutiny of the room itself and its architecture. It is gone over umpteen times throughout the course of the story in an attempt to discover how the murderer managed to escape. The rest of the time is spent in trying to figure out who is telling the truth. There are plenty of liars in this book and many lies of omission that impede the investigation for both Dr. Hailey and the clever policeman Inspector Verrey. Verrey even manages to come up with the first viable and logical solution to the murder. But he forgets one piece of evidence that plays a crucial part in the actual solution. Hailey, of course, gleefully points this out to the inspector. 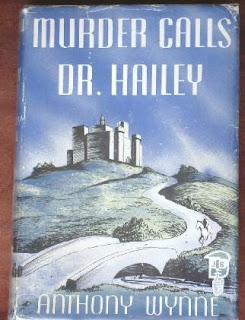 Hanging over the story is the presence of alcohol. I can't recall encountering a detective novel where the victim is an avowed teetotaler and a crazed proselytizing teetotaler at that. For Lord Glen his abstention from alcohol has become a dangerous monomania. Two of the suspects will be revealed to be alcoholics. Glen's vehement feelings towards those characters and his slighted relationship with them both affect the events that follow his death. Wynne gets a lot of mileage out of this. I thought it well done and an intriguing period style temperament in a murder victim. It also allows for logical reasons for characters to lie, then recant, then lie again. And in the instance of the second murder the alcoholic's secret hiding place for his stash of brandy nearly saves him from his own death. How's that for originality in a detective novel? For once Dr. Hailey's discussions of abnormal psychology (the behavior of alcoholics, in this case) makes sense and have a firmly accepted resonance to them. Usually his psychological observations are weak and flimsy seen through a modern reader's eyes. At one point, Hailey makes mention of "the deeper mystery of the man" in discussing the personality of the murderer. When that deeper mystery is ultimately revealed the reader is faced with an intriguing personality type with an unusual motive for murder, one that may even strike a resonant modern chord.

There have been issues taken with the fair play aspect of this particular title. Without a deeper knowledge of 1920s experimental radiology and hematology (both are discussed cursorily in the context of the story) you may never completely solve the murder of Lord Glen. For this reason there is a surprise in the final chapters that is indeed unfair, but I never care about this when reading the detective novels featuring Dr. Hailey. It's like playing cards with a really good bluffer. You know you're going to have to accept that most of the time he's lying about what's in his hand but you accept it and go ahead and make a bet because that's part of the excitement of the game. You raise the stakes yourself. When you're proven wrong anyway you can't be angry because you made the decision to be fooled from the start. That's how I feel about reading these books by Anthony Wynne.  I want to be completely taken in by a great bluffer and, flaws and all, I admire that talent.
Posted by J F Norris at 11:44 PM