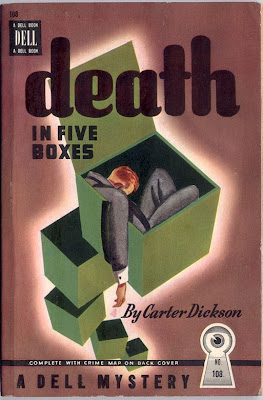 Here's another greatly under appreciated book in the Sir Henry Merrivale series.  This has -- flat out -- the best opening of any of the books in the series. The first three chapters whiz by and are as action-filled as one of the dizzying comic book hero movies that are flooding the cinemas these days.  A young girl runs out of the rainy darkness into the arms of a passing doctor, pleading with him to go inside the building across the street and rescue her father only to discover a roomful of drugged people and one stabbed corpse. Oh, and I shouldn't forget the bloodstained umbrella-cum-swordstick that comes bouncing down the staircase as the two race up before they even set foot in the room. You just can't stop reading there, can you?  Of course not.

And there are impossible situations in abundance here.  Who drugged the guests in Felix Hayes home?  How was the poison administered when the cocktail shaker that contained most of the drinks had not a trace of poison in it?  How did the murderer escape the building when the rear entrance was locked?  What is the meaning of the five boxes sent to a lawyer's office that were then stolen only a day later?  There are these and many other puzzles that will baffle even the most astute reader. 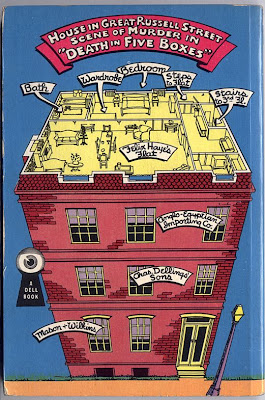 In the process of unraveling all the baffling elements of the crime and the discoveries at the scene of the crime it is learned that the four drugged guests found in Felix Hayes' apartment all have one thing in common - they apparently have all committed a crime that escaped detection and prosecution. Was Hayes blackmailing them all and did one of them do him in to prevent the secret form being publicized?  It's a bit more complicated than simple blackmail.

I would count this book as one of Top 10 of the Carter Dickson books.  I'm surprised not much is written about it.  I found it to be a perfect example of what Carr/Dickson did so well. Create an impossible situation, complicate it with lots of odd behavior, throw in numerous red herring bizarreness and deliver a walloping surprise. Yes, I gasped.  I was reminded of my stunned reaction to Ellery Queen's The Greek Coffin Mystery. It's a corker for sure.

And just for the heck of it below this paragraph is the cover of the Belmont Tower reissue paperback version of Death in Five Boxes.  The illustrations have absolutely NOTHING to do with the story.  I'm positive this publisher lifted their artwork from other books and slapped it on their books without regard to the story's content. There is no bearded men with a German Luger. There is no Gothic looking castle. What are those five ghostly figures loating beneath the castle? Are they children? Mannequins? Dead bodies?  If you own this copy and have yet to read it rest assured the cover is one huge illustrated non sequitar. 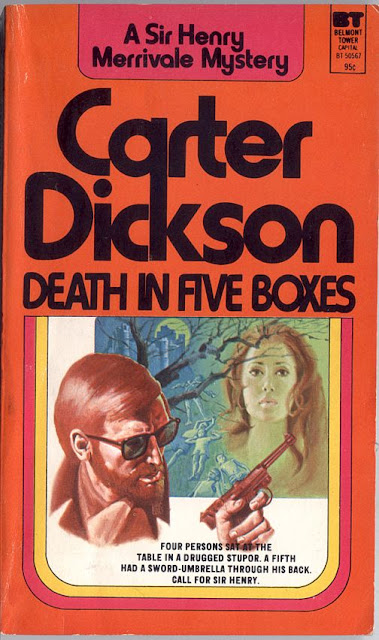