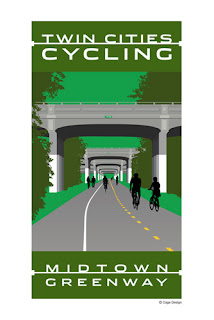 Our second visit to Minneapolis was a trip devoted to exploring the city's well maintained labyrinth of bicycle trails. This could well turn into a twice annual adventure. Our first time here we didn't bring the bikes and regretted it even if the weather that time was less than desirable for wheeling around the city. When we discovered that Minneapolis is easily the most bicycle friendly city in the entire country we knew we had to come back with our portable set of wheels. This time we had gorgeous weather unlike Chicago which got torrential storms that flooded most of the city.

I had only one day to sneak in a visit to a bookstore and there were two I wanted to visit, but since the other was in St. Paul I had to make due with just the one. So I ended up at Uncle Edgar's, one of the best and oldest mystery bookstores in the country. In 1974 the store began as Uncle Hugo's named for Hugo Gernsback, founder of Amazing Stories magazine, the first pulp to foster the development of the science fiction short story. It was solely a science fiction, fantasy and speculative fiction bookstore and remains the longest running and oldest science fiction bookstore in the U.S. Uncle Edgar's (named for you know who) came along in 1980 and takes up the entire rear of the store with a huge selection of both new and used books.

Apart from The Mysterious Bookshop in New York I have yet to find a mystery book store with a more impressive collection of out of print and vintage mystery fiction of all types. Usually I can browse a mystery bookstore or the mystery section of a used bookstore and be done in less than an hour. The types of books I'm interested are hard to find in the typical used bookstores. At Uncle Edgar's I was practically lost without my want list which I rarely carry with me anymore. I kept rushing back and forth between the old and the new areas and then between the two paperback sections -- one for mass market paperbacks from all decades, the other for vintage paperbacks mostly 1940-1970 though there were some 1980 reprints of earlier titles in here as well. Nearly all of the vintage paperbacks were protected in mylar plastic covers which is always a sign of a used bookstore that cares about what they sell.

This time I went in primarily interested in the vintage paperbacks which I barely looked at the last time I was in the store. My interest in them has been renewed now that I have this blog. I keep coming across writers previously unknown to me whose work only appears in paperback originals. After the vintage paperbacks I went through the hardcover books as well, but soon was overwhelmed and lost without a list of specific titles. Nonetheless, as headache inducing as it seemed, I came out with quite a pile of treasures.

And here's the take from Uncle Edgar's.

Séance for Two by Mark McShane
The sequel to Séance on a Wet Afternoon, a book I own but have never read. I have seen the movie version with Kim Stanley and Richard Attenborough, though. Excellent! I plan on reading both for a future post. McShane is sort of a cult mystery writer. His books are strange and weird and wonderful. Under another pseudonym (Marc Lovell) he wrote a series of supernatural thrillers about occult investigators doing Shirley Jackson style haunted house research and a couple of books about a con artist/hypnotist.

Paperbacks
Death at the Medical Board by Josephine Bell
This was an unfortunate mistake of a purchase. I thought it was her first book but that title is Murder in Hospital. See what happens when you forget your list and have a middle-aged memory that is quickly losing its former youthful powers? [...sigh...] I'll read it anyway. This one was originally published in 1944 and it's her ninth book. She's kind of hit and miss in her later career as opposed to when she first started writing in the late 1930s. Hopefully, I lucked out with a better one. Nine has been a lucky number for me.

The Man with My Face by Samuel W. Taylor
One of the most outrageous spins of the doppelgänger motif in suspense fiction. Author's first crime novel and it's a corker, gang. There are a lot of dog attacks in this one. Pretty savage for a book published in 1948. Could be the first book to introduce the Doberman as one of the most fearsome of dog breeds. Remember all those Doberman movies in the 1970s? When I was growing up in Connecticut way back then no one wanted anyone to own one. Now I hardly ever see one anywhere. A really entertaining action packed book that hardly perfect (it's riddled with novice writer flaws) is really worth seeking out. A review is coming on Tuesday.

TCOT Cold Coquette
TCOT Nervous Nude
TCOT Laughing Virgin
TCOT Silent Stranger all by Jonathan Craig
I am determined to read this entire series. I now have every title except Morgue of Venus. Since that's the second in the series and Cold Coquette is third my plan for reading the series in chronological order just went out the window. But no matter. Like Sergio over at his Tipping my Fedora blog who intends to read and write reviews for all of Ed McBain's 87th Precinct series I hope to have reviews of all of Craig's 6th precinct books up on this blog.

A Talent for Murder by Anna Mary Wells
This author's first book. I reviewed Murderer's Choice last week for the Friday's Forgotten Book series. According to one of the first reviews for this detective novel first published in 1941 "the discovery of the villain is a decided shock." We shall see just how shocking.

The Man Who Left Well Enough by Mark McShane
I like this writer as I've mentioned above in the hardcover section. I couldn't resist the hyperbolic ad copy on the front cover? A brief mention of this book in 1001 Midnights first brought this to my attention. Been on my want list for several years. Lucky find!

Tomorrow the treasure trove of book finds and purchases continues with my surprising haul at the Newberry Library Book Fair. Stay tuned!
Posted by J F Norris at 5:58 PM