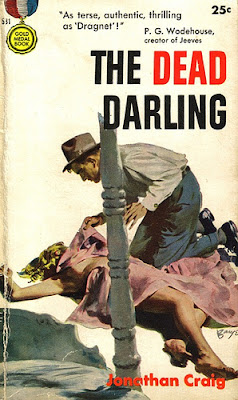 I can't think of a more unlikely person to rave about a gritty detective novel set in the subcultures of Greenwich Village than P.G. Wodehouse. He was a fan of detective stories and even thrillers, this is true, but it's like seeing a blurb quote from Noel Coward praising the work of Jim Thompson. At least two copies of The Dead Darling, including the one I own, have a blurb by the creator of Bertie Wooster and Jeeves exclaiming the work of Jonathan Craig: "As terse, authentic, thrilling as Dragnet!" All that is true and more. Wodehouse knows his crime like he knows pigs and butlers.

From 1955 to the late 1960s Jonathan Craig, pseudonym for Frank R Smith, wrote a police procedural series about the 6th Precinct. The two detective leads are Pete Selby, who serves as narrator, and his partner Stan Rayder. The police methods are some of the most methodical and bureaucratic I've read in an early novel of this type. Before anyone says "Oh yeah, Ed McBain did that kind of thing and with a bigger cast of cop characters" it should be said that the first 87th Precinct novel (which uses a fictitious city based on New York) was published in 1956. Craig started his series of cop novels in 1954 and dares to use the real New York as his setting. McBain has said that he was inspired by the "Dragnet" TV series. I can't say where Craig got his inspiration but he beat McBain at this idea by a couple of years.

After looking up the actual NYPD precinct maps I learned that it's a fairly large area for police to cover. The 6th precinct serves the entirety of the West Village with the boundaries being 14th Street to the north, Broadway the west, Houston Street to the south and the Hudson River as the eastern border. Greenwich Village in the 1950s was a rich environment for a wide variety of characters. It's an excellent choice for a crime novel. Artists, musicians, poets and writers. Models, actors, jazz singers, and the coffee house scene. And of course the burgeoning gay and lesbian neighborhood that would make headlines in 1968 with the Stonewall riots. In Craig's first outing (despite what my 1970s reissue advertises on the cover shown below The Dead Darling is the first 6th precinct novel) all of these cultures will play some sort of role with the lesbian scene, surprisingly, taking center stage. Well, almost center. Maybe a little down left of center, for a few solo numbers.

Jean Proctor is the dead darling of the title. She's found stretched across three chairs with her head in the oven of her tiny kitchen in Greenwich Village. Selby and Rayder are pretty sure it's a staged suicide even if the place reeks of gas. An autopsy shows a recent wound to the back of the neck and it's confirmed that a broken neck was the primary cause of death. Jean was a model who made a living as a handsome head of hair in a big shampoo ad campaign in several leading magazines. A former roommate, Norma Johnson, stumbled across the body. She informs the police that Jean was formerly married to a bruiser of a husband, Halston Proctor, who routinely beat her and she suggests that he is probably the one who killed her. But Selby and Rayder will soon learn that Jean had several men in her life. A handful of them married to other women.

Originally published by Gold Medal, the pioneer publisher of paperback originals in genre fiction, The Dead Darling is bound to have an element of the lurid and the seedy to appeal to their audience of the time. But the characters are never presented condescendingly or as freaks. It's a fine line that Craig walks here. I think he presents them as people well aware of their idiosyncrasies and unabashed in owning up to them.

The prize winner in this book is Paul Cressy, a peeping Tom with a salacious appetite for spying on babes undressing near unshaded windows. He happens to be caught indulging in his hobby in the neighborhood of the victim's apartment a few days after the murder of Jean Proctor. Selby and Rayder grill him hoping to get him to admit to seeing something or maybe even committing the murder. Instead, Cressy gives them an alibi. He goes into great detail describing a party which he spied on in a completely different part of the Village. As Cressy tells it (he could hear as well as see) some women had been to a burlesque show and they dare each other to come up with a better strip tease than what was on the stage. What starts out as a teasing contest results in abundant female nudity on display, then the men join in, and the whole night ends in a pansexual orgy. The two cops then decide to visit the apartment in question and have one of the participates corroborate the story. Amazingly, he does so with a little pressure from the police. Begrudgingly Selby and Rayder concede that Cressy is in the clear. Rayder ends the interview with this comment: "I've seen some characters in my time, Cressy, but you make them seem almost normal, you really do."

Another kind of intriguing lowlife is Nancy Ford, a police informer who envisions herself as a historian. Four years ago she put to use her considerable skills as a historian of Greenwich Village by collecting private life information and in the guise of literary research blackmailed several prominent and wealthy people. She made a bit of cash with the weaker more vulnerable targets. Foolishly she did this through the mail and after contacting a few smarter and braver people learned too late that she had laid a trail of evidence that sent her directly to jail.

Nancy likes her history and her wine. Selby always brings along a bottle or two in exchange for his information. Nancy hasn't even cracked the bottle open before she's offering up lots of tidbits about the lesbian clientele at Orrie's, a popular ladies only bar where Nancy used to get a lot of her history, and continues to frequent now that she's doing research for the police. Her dialog is great. She knows who she is and isn't ashamed being a stool pigeon as long as she gets paid and a couple of bottles of wine are thrown in as part of the deal. I pictured her being played by Joan Blondell or a younger Thelma Ritter. Her scenes are a highlight in the book. 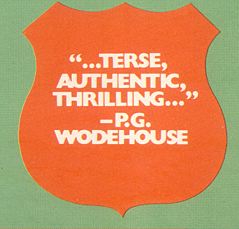 As mentioned earlier Jean Proctor was a flirt with the men and led a few husbands astray. Consequently, there are a few wronged women in the cast. The Dead Darling might well be re-titled Hell Hath No Fury. Three different women get burned by their lover or husband during the investigation of Jean Proctor's death and each woman deals with her mate's infidelity in a unique way. One wife rushes to protect her husband, another tries to implicate him in the crime and punish him in a cruelly passive aggressive manner, and still another seems a bit too aloof about the affair as if she was immune to her husband's attraction to a considerably younger woman. Then there's poor Betty Calder, the artist used and abused by the thrill-seeking Norma Johnson.

When we first meet Norma we know she's bad news. She's discovered the body and she tells an elaborate story that is full of holes. Selby knows she's holding back on the truth and continues to pursue her and grill her. He even assigns a policewoman to tail Norma. When Norma is spotted putting $450 down on a fur coat Selby is sure he's got his chance to break her down. After all, where does a rookie lingerie model get that kind of money in 1955?

Much of the story is told through monologues. The dialog is lively and quirky. It's very much peppered with 50s slang and lingo which is something that appeals to me. I get a kick out of old time vocabulary. At one point late in the book an angry drunk says "Forn off!" I wasn't sure if this was supposed to be an attempt at a drunken slur or if the publisher was censoring Craig's more pungently flavored dialog. Yet even with all the talking there is a good amount of legitimate detection. That most of it comes at the end of the story and in a flurry may speak to Craig's pulp magazine roots (he had several stories in Manhunt prior to his novels), but it's no real fault. These are great police detective books - well told, fast paced, intelligently written, some compassionate treatments of marginalized characters, and often the story comes with a surprising twist at the end. 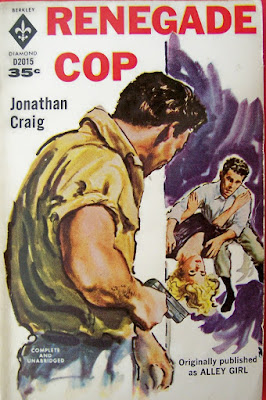