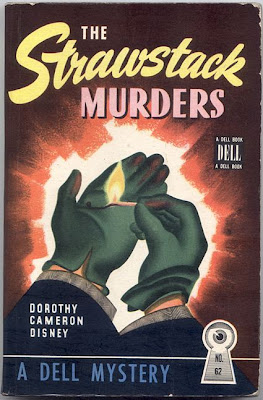 Promises, promises. I try my best to live up to them.  Here's my slightly overdue follow-up to TomCat's review several weeks ago on the impressive early work of Dorothy Cameron Disney.

Disney's second novel is practically a text book example of the Rinehart school.  The very first page contains a sentence that encapsulates the HIBK subgenre:


For it seems to me now...that I could have prevented the dreadful series of crimes which so hideously involved us all.

The line is spoken by Margaret Tilbury who will tell us the story of those dreadful crimes and reveal a tale of duplicity and treachery set in motion by a villainess who rivals the actions of Lydia Gwilt or any other  from Victorian sensation fiction. The opening of the book is subtle in its background details and exposition. There seems to be an overload of information and Margaret comes off as a babbling spinster obsessed with her health and her odd relation with her sister and brother-in-law. It is almost as if the story will become a family saga or a domestic soap opera.  But such details as Margaret's being treated for typhoid fever, an overheard phone conversation, and a servant's loss of a milk can are hardly extraneous. Nothing can be taken for granted. Nothing is ever mentioned offhand. Even the most ordinary and mundane activities will take on a sinister aspect.

It is the character of the duplicitous nurse Dorothy Fithian and her bizarre death that will involve the Tilbury household in a conspiracy to protect their own. Dorothy was far from likable. Yet no one no matter how off putting deserves to be strangled, shoved into a strawstack and left to suffocate, and then set aflame. But someone hated Dorothy enough to do that and more. When a member of the household is implicated Margaret and the family lawyer tamper with evidence in order to divert suspicion from one of their own. They replace a pair of gardening shears into a toolbox that they believe only one person could have moved. The family name is far more important to preserve than finding Dorothy 's killer. 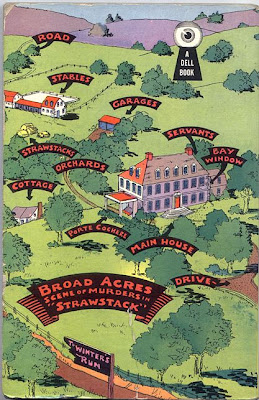 Margaret and her relatives all seem to be playing amateur detective. Even the servants get involved. There is an attack on one of the family members (she apparently is struck on the head with a typewriter and survives!), there is the disappearance of some milk cans, a missing typewritten note and several other minor mysteries that follow the death of Dorothy. Margaret is puzzled by them all and wants to solve them before the police do. But Inspector Chant is way ahead of all of them. He confronts Margaret about her evidence tampering. She remains close mouthed about her involvement, Chant warns her that he will get at the truth one way or another and her refusal to cooperate will do more harm than good.
As if her fiddling with a pair of garden shears wasn't enough Margaret will attempt to figure out why a typewriter was placed beneath a bed and what happened to the note that was supposedly left inside. In doing so she endangers herself.  It is the fate of these HIBK heroines to snoop and then suffer strangling, mugging, blows to the heads and other violent attacks when they get "too close to the truth." Margaret will not escape completely unscathed.
As formulaic and drawn out as this novel seems it does keep the reader engaged. Margaret's narrative can sometimes get a bit irritating in its HIBK allusions to what has yet to happen for the reader but has already happened to her, however Disney does her best to keep these intrusions to a minimum. The detective novel aspects of the story are rather well done. It does have a fair play atmosphere. A truly astute reader could, in fact, unmask the killer. Yet Disney so cleverly hides the two crucial clues in the narrative that I am sure it will come as a stunning surprise when the murderer is pointed out by a surprise guest called in at the eleventh hour.
Posted by J F Norris at 1:20 PM