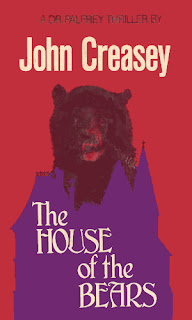 The term detective here is used rather loosely. Dr. Palfrey is not really a detective, he is more of a secret agent, although there are elements of the detective novel in the books that feature this early creation of the astoundingly prolific John Creasey. Dr. Palfrey and the agents of Z5 were part of a series of over 30 books Creasey wrote under his own name before he turned to his arsenal of pseudonyms. Palfrey is also one of his earliest creations. The first Dr. Palfrey adventure was Traitor's Doom (John Long, 1942) and the books continued into the 1970s ending with The Whirlwind (Hodder & Stoughton, 1979).

The most interesting aspect of this series of books which started out as straight espionage thrillers is that they grew to be more and more bizarre. Using the tropes of the pulp magazines Creasey was able to explore ecological and political threats that were making news headlines by creating mad scientists and criminal masterminds who were at war with the forces of good. By the 1970s there was renewed interest in pulp writers and their heroes and paperback publishers were re-issuing the adventures of The Shadow, The Spider and Doc Savage. Berkeley Medallion decided to join in by re-issuing the weirder books in the Dr. Palfrey series and market them as neo-pulps. "If you like Doc Savage, you'll love Dr. Palfrey!" the cover of each book proclaimed.

The first book I read in the series, The House of Bears (1946),  was not as strange as I hoped it would be. Palfrey has temporarily left Z5, a secret "peace promoting" organization run by the mysterious Marquis of Brett, to pursue his private practice and attempt to enjoy married life with his wife Drusilla. They are called to the home, an imposing Gothic structure decorated with stonework bears, a bear door knocker and bearskin rugs in nearly every room hence the title.  The think they are going to a see a patient being cared for by their friend Dr. Halsted.  Instead they find they have arrived only minutes after a near fatal accident. A young woman has fallen from a balcony and is severely injured.

Despite his claim that he is not a detective ("There is a big difference between spying and detecting.") Palfrey cannot help but turn Sherlock Holmes. What happened to Dr. Halsted? Where is the patient they were meant to consult on? The young woman, Loretta, apparently has been the victim of a series of near fatal accidents - is someone trying to kill her? An investigation of the woodwork on the balcony proves that it had been tampered with and the fall was an attempted murder. The missing patient turns out to be Loretta's fiance, Garth, a physicist who had been working on a secret project. The various mysteries will prove to be be linked to Garth and his work.

This is basically a straightforward adventure thriller with a few detective story elements in the first part. The second half of the story tells of Palfrey's return to Z5 and his assignment to locate and rescue Garth. There are many set pieces of the spy thriller - Drusilla is kidnapped and chloroformed on a rocky cliff side, Palfrey is tossed over the balcony when looking for a secret compartment in one of the carved bears on the railing, a bomb is thrown into a police conference room, and there is a chase into a cavern with a group of schoolchildren on tour. It's loaded with action, but the weirdness I was hoping for is absent.

Reflecting the thawing of the Cold War, the lessening paranoia of the communist threat Creasey turned his attentions away from the cloak and dagger action thriller to the neo-pulp adventure. As mentioned earlier he looked to the news headlines for inspiration. In the 1970s especially, when the ecology movement was in its infancy, he found his plots among the increasing problems besetting Mother Nature. Yet even as he added the bizarre and the weirder aspects to the Dr. Palfrey series many of the stories seem to be re-writes and spin-offs of each other.

In Dark Harvest (1947) a criminal mastermind demands a huge ransom or he will begin destroying farmlands with a deadly chemical. This idea is recycled twenty years later in The Famine about bizarre rabbit-like creatures that ravenously consume crops and plants. They also attack and kill any human trying to stop them. There's an element of Monty Python & the Holy Grail in this, but it is an effective pulp yarn with some terrifying moments. 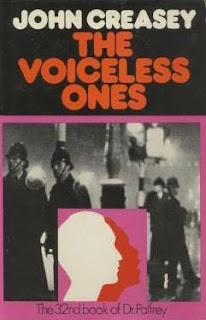 A virus carried by mosquitoes renders people immovable and unable to speak in The Plague of Silence (1958). Silence and immobility is revisited in three other books: The Sleep (1964) is a coma-like state created by a mad scientist bent on controlling humanity, The Insulators (1972) tells of a machine that can remove sound and create lasting silence, and The Voiceless Ones (1973) features prominent government figures who mysteriously lose the power of speech (something that I wish would befall several American senators these days).

Ecological cataclysms are featured in The Smog (pollution clouds descend upon cities suffocating and killing the population), The Blight (an alien disease decimates the world's timber supply), The Whirlwind (machine can create tornadoes and destructive windstorms) and in The Drought Creasey sees the effects of nuclear testing causing a nightmarishly fast global warming as rivers dry up and the polar ice caps evaporate.


While it is easy to dismiss these impressively imaginative stories as potboiler entertainments there is something more substantial that might be overlooked. Creasey seemed to be writing cleverly subversive books. Each of his Dr. Palfrey books from the later period (about the mid 1950s to the final book in 1979) incorporated discussions of topical events. Much like the way Rod Serling circumvented the CBS censors in his "Twilight Zone" episodes by using fantasy and science fiction treatments to write about McCarthyism, racism and other intolerances, Creasey also exploited the pulp adventure format to talk about environmental hazards, political abuses and social apathy. He was one of the earliest crime writers to use the genre as a form of consciousness raising in his readers. For that alone he deserves some commendation as a pioneer in early 20th century crime writing.
Posted by J F Norris at 1:48 PM