The Reader Is Warned - Carter Dickson 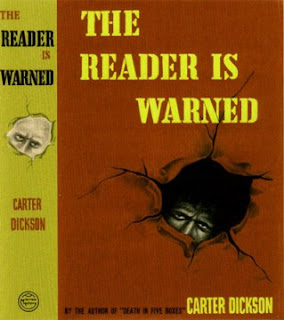 Sir Henry Merrivale has no patience for frauds. But he's up against a singularly delusional fraud in The Reader is Warned. Herman Pennik is a self-professed mind reader who believes that he has harnessed a new power he calls Teleforce. He claims that he can kill by thought alone. At the home of Mina and Sam Constable Pennik promises he will put to test his powers with a fatal experiment. At around eight o'clock that night his host Sam drops dead. No other cause than literally dropping dead can be found. It seems that Pennik managed to pull off his experiment with the expected deadly result. Merrivale and the reader know better. There is a fiendish murderer loose in the house taking advantage of the supposed power of the charlatan.

The power of a mind reader really lies in a face to face confrontation. Reading about someone who claims to read another character's mind is not as impressive as an utter stranger telling you in person what you happen to be thinking. The pronouncement of one's private thoughts is not only invasive but I imagine can be a personal shock. But does the telling alone of an exchange between mind reader and his mark have as great an effect as one in real life? I was dubious how Dickson could pull it off.  Little did I expect how Dickson would exploit the mind reading claim and turn Pennik into the most fascinating character in the book. I was waiting for him to trip himself up and for Merrivale, Dr. Sanders and the irascible Inspector Masters to expose him, but Dickson took the story into another realm. As the story progresses Pennik goes through a metamorphosis of sorts from a mildly amusing charlatan to creepy cocktail party entertainer and finally megalomaniacal avenger. Pennik even takes his story to the radio airwaves and newspapers. The story takes place in 1939.  Hitler is also in the news. The idea of killing by thought alone captures the imaginations of a populace already feeling the threat of imminent war. Soon the entire country seems to be caught up in a paranoia of the terror of Teleforce. 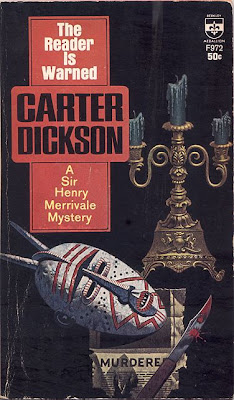 Here is yet another of the ingenious impossible crime novels in which howdunit seems to be far more important than whodunit. In the case of the two deaths in The Reader Is Warned there is the added mystery of whydunit. Both deaths appear utterly motiveless. I began to think that Dickson was using the most unusual of motives also employed by Agatha Christie in her brilliant theatrical detective novel Murder in Three Acts. But I was to be proved wrong. Of course.

Clues are abundant in this book, but I challenge any reader to spot the correct ones. As an example, there is an instance in which Dr Sanders knocks a glass off of a space heater in a room. This is mentioned about five times in the course of the narrative and I knew it was significant. But I spent too much time focused on the broken glass and completely missed the real significance of the repeated mention of the accident. It's a prime example of the mastery of misdirection that is prevalent not only in this baffling novel, but nearly all of the Merrivale books from his best period.
Posted by J F Norris at 9:07 PM