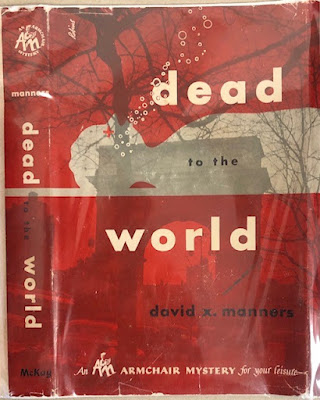 THE STORY: Mystery writer James Stanley Hunt has been drowned in his bathtub. When he “wakes up” he discovers his wife Chili, a dancer in a musical revue, has summoned his ghost via a spiritualist. She wants him to solve his own murder. He takes up the challenge and is helped by a journey into the past via some strange time travel where he encounters himself.

INNOVATIONS: In Dead to the World (1947) Manner’s sophomore and last work as a detective novelist we have quite a melding of genres -- ghost story, detective novel and a timeslip plot motif so often found in science fiction stories. Other notable novels incorporating the motifs of a ghost who solves its own murder are Post Mortem (1953) by Guy Cullingford and for time travel in the context of a detective fiction plot we have Repeat Performance (1942) by William O’Farrell. While the ghost story aspect is often played for laughs and the time travel is hazily explained there is no doubt that Manners has concocted a legitimate detective novel with more than the requisite plot twists and unexpected developments.

Unusual for a time travel story is the conceit that James Hunt-human and James Hunt-ghost occur in several scenes simultaneously. In order to clear up the confusion human James of the past is referred to as “Jim” while the ghost narrates the story as “I”. Takes some getting used to the “I” James Hunt referring to himself as “Jim” but as the story progresses the confusion dissipates and it’s easy to distinguish them as separate characters even though they are in essence the same person.

What isn’t too easy to accept is the way the ghost travels around the city. Because he is a wisp of a being and can’t actually be seen by anyone other than his wife who summoned him he is a bind when it comes to getting from place to place. Since he is invisible to nearly everyone he can’t, for instance, hail a cab, so he finds it necessary to hitch rides by closely following a human inside. His “vaporous fingers” can’t turn on a light switch or grasp and turn a door knob. He must wait for humans to perform these actions for him. Yet when it serves the plot he can easily pass through walls in order to access a room! He also behaves too much like a human, taking off clothes in order to sleep, and putting on shoes before leaving his house. Very odd for a ghost, I’d say. These infrequent inconsistencies in the construct of the fantasy world led me to give Manners a few demerits for laziness.

Still the plot itself makes up for the admittedly few slip-ups and contradictions. The beginning of the novel is actually the end. James announces that he has solved a murder but several chapters pass by before we realize who was killed. Yes, he is supposedly drowned and dead in the bathtub, but we -- along with “I” -- travel back to the previous events and follow “Jim” through the series of events that lead to the murder of a woman folk singer. A surprise is in store when her corpse is replaced with a nude statue. In fact the identity of the missing corpse is a mystery in itself. Is it Jennifer Dell, the singer, or her friend Muriel Paquette? Was there a mix-up because they were dressed similarly and look somewhat alike? This piece of the plot reminded me too much of Laura (novel written four years earlier than Manners' book and the very popular movie coming out in 1944). And that plot similarity carries through to include one of the biggest surprises in Laura. I was disappointed with that copycat plot but once again Manners accomplishes a nifty coup when he outperforms even Vera Caspary in plot machinations. I was genuinely surprised by the murderer’s identity, if not his very old school motive. There are in fact several murders in the book before we get to the climactic moment when Jim ends up in a bathtub. 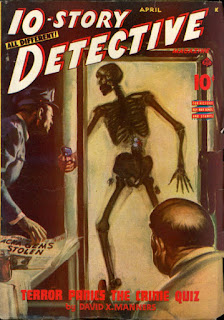 All is explained in the end including the quirky reason for the appearance of the ghost in the first place. For such a violent and tough action-oriented book there are happy endings all around with several reunions, a couple of planned weddings and a final smile inducing touch of irony in the penultimate chapter. 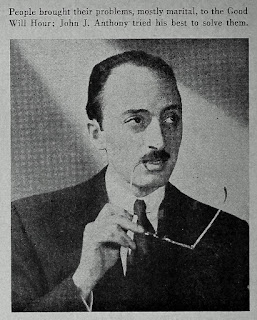 THINGS I LEARNED: Towards the end of the book Jim is faced with various domestic troubles in two different families while sorting out possible motives for the killing of Jennifer (or is it Muriel?). Manners writes: “Jim Hunt was feeling suddenly like Mr. Anthony, mender of broken homes.” He is referring to John J Anthony (born Lester Kroll) who had an extremely popular radio show, “The Good Will Hour,” devoted to giving advice to unhappy married people. According to Kroll’s New York Times obituary: “At the peak of his radio career, in 1939, Mr. Anthony was heard on more than 700 stations and his earnings were estimated at $3,000 a week [$55,372 in 2019 money].” 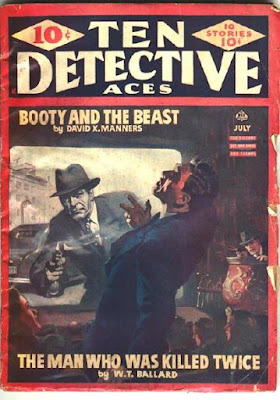 THE AUTHOR: David X Manners (1912-2007) was a highly prolific writer of detective, adventure and western short stories for various pulp fiction magazines. From his first story, “A Striking Resem-blance” (Ten Detective Aces, Nov. 1934) to his last, “The Town that Terror Built"(Adventure, Oct 1959), he was one of the most popular American writers in the second tier magazines. Frequently, his name appeared on the cover of Ten Detective Aces, sometimes he had the featured cover story (see at left). Clearly, the publisher’s thought he was a guaranteed seller for that particular magazine. Though his stories number close to 130 he wrote only two full length crime and detective novels, Memory of A Scream (1946) and Dead to the World (1947). 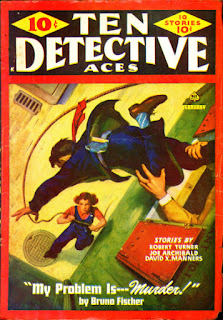 Oddly, he is best known for being the inventor (according to himself and his family) of the do-it-yourself handbook. An accomplished carpenter and craftsmen he authored several books on DIY home projects some of them still in print today. His nascent career as a pioneer in DIY home repair can be seen in Dead to the World when James Hunt ingeniously uses the knife-like corner of a candlestick as a hatchet and uses it to break open a wooden door (“Remembering that the penetrating power of such things as knives and picks was because all the force behind them was concentrated on a very small point of surface…”). Manners later went on to create his own publishing company devoted to DIY books and a public relations firm which sadly declared bankruptcy last year.
Posted by J F Norris at 12:08 PM