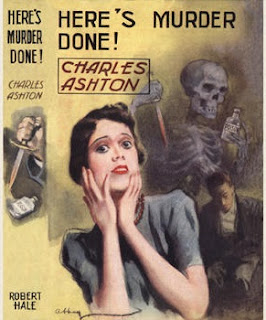 THE STORY: Irritating philatelist Ambrose Merrow was not liked by his neighbors for he never stopped talking about his treasured stamp collection. But was that any reason for someone to brutally stab him? And how did the murderer do the foul deed in a locked house in the presence of three people then escape the crime scene without being seen? Inspector Dick Sangster matches wits with a clever killer and uncovers a nasty blackmail scheme and a past murder before he brings the culprit to justice.

THE CHARACTERS: Here's Murder Done! (1943) is populated with a variety of theater people and though it gives us some insight into the world of playwriting and arts criticism it is not truly a theater mystery. Still, theater and acting most definitely play a part in the story. Ashton gives us two playwrights, one music critic, and an actress in his cast of interesting characters. Godfrey Taversham, playwright #1, and his fiancee Diane Harlow, an actress, are two of the three witnesses present when Merrow is killed in his house. They, along with Constable Hockey, are on the front step, see Merrow stick his head out the window of an upper level and wait patiently for him to open the door. I was sure that some kind of impostor gimmick was being pulled on us here but that turned out completely wrong.  Nevertheless, theatricality does play a part in the rather ingenious solution to this near impossible crime. Who got into the house while the front door was being watched and the back door was locked from the inside? And how did the killer get away unseen?

Sangster employs some unorthodox eavesdropping tactics and overhears Taversham and Diane having a conversation about a missing ladder and the unusual experiment Sangster and his sergeant performed proving how someone might have got onto the Merrow property without leaving any footprints. As he listens in Sangster discovers they are acting like amateur sleuths attempting to sort out the real clues from the red herrings. By the end of the conversation Taversham is certain he is onto the solution while Diane wants him to keep his mouth shut. Will their detective work prove too dangerous for their own good?

I liked the outspoken music critic Rupert Carrington who after a series of routine Q&A scenes with Sangster and the various suspects and witnesses was a delight of sarcasm, impatience and sardonic wit.  He thoroughly loathed Merrow calling the murder victim one of the most annoying men he ever met. He also can't stand the pompous writer Peppington (playwright #2 and aspiring novelist) whose lofty opinions prove he is nothing more than a dilettante and a windbag. Carrington tells Sangster that if anyone would have had an argument or had it in for Merrow it would be Peppington, a man whose disdain for everyone in town surpasses the minor irritations of Merrow and his nonstop blather about stamps.

And of course there is Peppington himself, not to mention his equally supercilious wife Amelia and their out of control six year-old son Sebastian.  They are clearly meant to be satiric portrayals of the kind of pseudo-intellectuals who were cropping up during wartime. Peppington has a grandiose manner and an insufferably egotistical persona of the sensitive artiste "living on a higher plane." He and his wife have ascribed to the new permissive notions of raising a child without discipline. Their unrestrained parenting results in a foul-mouthed son who calls his parents by their first names and challenges every authority figure he meets. Sebastian treats Inspector Sangster like a fraud, calling him a liar to his face when the policeman teasingly refers to himself as Father Christmas. The scenes with the Peppingtons are hilarious showing off Ashton's talent as a farceur and a skilled writer of absurd dialogue. 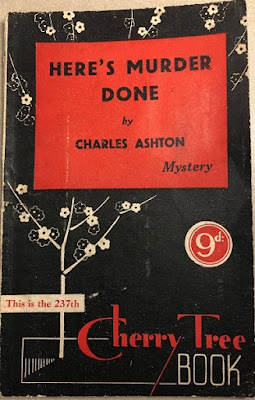 INNOVATIONS:  With a first half made up almost entirely of Sangster's straightforward interrogations I thought that Here's Murder Done! was going to be just another run-of-the-mill detective novel, relying on tired formulae and plot gimmickry. I was completely taken aback by three well-handled twists of the plot, two of which were shockingly surprising to me. There is a second death of a character one would never expect to be knocked off by the writer. It sort of defies the expectations of detective novel conventions and really made me gasp. The second was a neatly pulled off introduction of a surprise relative of the murder victim that changes the entire structure of the plot and sends the reader off into a whole new realm of motivations. By the halfway mark Ashton has done quite a bit of leading the reader down the garden path and I was completely taken in.  I could kick myself for overlooking the most blatant clue involving the world of theater people. Best of all the solution to the impossibility of the murderer's escape is simple and eloquently presented when Sangster delivers his findings in the final chapter.

Here's Murder Done!, for me, was an excellent example of a second tier writer matching the ingenuity of the Grand Masters point for point. The clues I was meant to see are cleverly hidden, often appearing in conversations that any reader would dismiss as "filler" and the red herrings were so masterfully handled that I paid more attention to those than the genuine clues. This mystery novel ended up being one of my favorite reads this year.

THE AUTHOR: Back in 2016 I wrote a piece on how I discovered who Charles Ashton (1884-1968) was. A perfect mini biography turned up on Imdb.com when I learned that he was a former actor in silent cinema. Here is that bio: "Not long after receiving a medical discharge from the army due to injuries he received at the Battle of Ypres Charles Ashton became a movie actor. He made his film debut in Pillars of Society (1920). He appeared in a string of films for such well-known directors as Maurice Elvey and Victor Saville. Ashton was one of the many silent-era actors whose career ended with the advent of sound, and he made his last film in 1929. However, he did begin another career as a successful novelist in the 1930s and 1940s, mostly of crime thrillers." The bio is the work of "frankfob2@yahoo.com", a knowledgeable cinephile who wrote hundreds of profiles on movie performers and directors for that oft-used movie website. 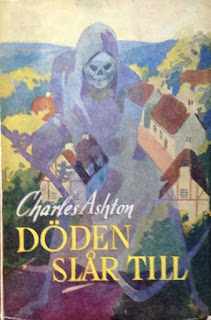 Charles Ashton created one series detective named Jack Atherley who supposedly appeared in at least eight titles. Only those marked as such in the list below can be confirmed. Atherley does not appear in Here's Murder Done! Ashton's books were published only in the UK by Robert Hale, Ivor Nicholson and Museum Press, not exactly top of the line publishers. Several of his books were reprinted in paperback editions by Withy Grove Press, Ltd as part of their often abridged "Cherry Tree Book" paperback digest imprint. These seem to be the only extant copies available for sale. I managed to purchase three of them over the past year so there will be more reviews on Ashton's mystery novels coming. None of his books were published in the US or Canada in his lifetime. There are no other known editions during his lifetime except for two translations of Fates Strikes Twice (1944): one in French (Le destin frappe deux fois), the other in Swedish (Döden Slår Till).

For those interested in Ashton's cinema career he appeared in at least 21 movies between 1920 and 1929. Among them are The Monkey's Paw (1923) in which he played the doomed son (a "sarcastic performance" according to someone who actually saw the film) and a bit part in a 48 minute version of Sweeney Todd (1928), unusual in that it features a man who dreams he is the murderous barber after reading a newspaper account of the crimes. For more on Ashton, just visit his IMDB page. 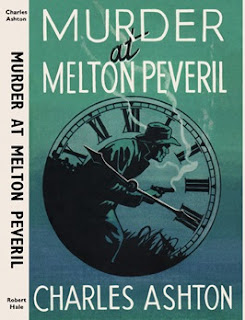